Following on the massive success of VIAF 2019 opening night, the sequence of 34 chamber concerts took off with a bang.  Accio Trio is an ensemble of young musicians whose musical maturity belied their young age.  Clemens Böck (Violin), Anne Sophie Keckeis (Violoncello), and Christina Scheicher (Pianoforte) gave a wonderful concert of works by Haydn, Mendelssohn, and Martin.

The concert started with Haydn’s Piano Trio no. 38 in D major Hob XV:24.  Among Haydn’s later Trios, the Piano Trio in D major Hob XV:24 is unusual in being consistently serious in tone, with almost Beethoven-like earnestness.  The first movement is on quite a large scale, full of pauses and surprises, sudden offbeat accents and bursts of energy – just the effects that Beethoven was beginning to exploit.  The writing for piano made full use of the English grand pianos Haydn had got to know, with rich chords, bold octaves in the bass and much brilliant elaboration above.  Special praise goes to Christina Scheicher at the piano — she managed to superbly maintain the balance without in any way detracting from her authority as the backbone against which this movement rested.  The brief second movement is built from an anxious little dotted-rhythm figure; this had the air of a solemn dance, leading without a break into the finale.  This looked, on paper, somewhat like a Minuet.  However, the triple-time was continually disguised and subverted by the interplay between the instruments, and by successions of phrases two beats long.  The overall impression was less of a dance and more of a rather earnest conversation, which finally came to an unexpected end as if the speakers had walked off through the door, still talking.

This work was followed by one of the many lovely and charming pieces by Mendelssohn, namely, hisPiano Trio no. 2 in C Minor op. 66.  Marked Allegro energico e con fuoco, the first movement began with a segmented theme consisting of rising and falling arpeggios and scales.  Its generic components made the theme very flexible and well suited to sonata form and to contrapuntal elaboration, which occurred frequently in the movement.  The secondary theme came across as more broad than the first and made an important appearance in the coda.  Harmonically, the Allegro was subdued and dark, with Mendelssohn progressing from C minor through G flat major, C flat major, and A flat minor, with occasional returns to C minor to remind us of the primary key.  There was some memorably playing by violinist Clemens Böck here.

Mendelssohn cast the second movement, Andante espressivo, in the relative major, E flat. Its subdued main theme, played first in block chords on the piano, set the tone for the whole movement.  The G minor Scherzo resembled that of the composer’s Octet op. 20, but is rather less refined.  Formally, it is unusual.  It was delivered as a frenetic, although quiet, bundle of energy in G minor, giving way to a lyrical Trio in G major.  After the Trio had run its course, a significantly shortened reprise of the Trio formed a link to the return of the Scherzo, which was itself abbreviated.  The key of C minor reappeared at the beginning of the Finale, marked Allegro appassionato and cast in 6/8 meter. (Brahms would later quote the main theme in the Scherzo of his Piano Sonata in F minor op. 5.)  The short, modular theme, first stated on the cello, lent itself to Beethovenian development.  In the midst of the development section, Mendelssohn inserted the theme of a chorale, “Vor deinen Thron”, presented almost literally and mingled with statements of the first theme.  Mendelssohn was perhaps following the example of Beethoven, who uses a chorale in his Piano Sonata in C major op. 2 no. 3, to impart a sense of profundity. When this chorale tune returns in the coda, it was given massive, symphonic treatment and was completely detached from the first theme.

The final item on the programme was Martin’s Trio sur des mélodies populaires irlandaises, a work which the audience all commented on at the end that it is not well-known enough.  In fact, little is known about the composer himself.  The 20th century Swiss composer Frank Martin is not even mentioned in standard ‘listener’s guides’ to Classical music, chamber music or otherwise.  A descendant of French Huguenots (devout Calvinists who fled persecution in France and resettled in various places including Geneva), Martin would turn to composing deeply religious choral and instrumental music in his final years producing some of the most highly regarded sacred vocal works of the 20th century.  However, his instrumental music is equally marvellous.  Martin’s most widely-known work is the Petite symphonie concertante featuring piano, harpsichord, harp and two small string orchestras.  He played both the piano and the harpsichord, and throughout all of his music he displays a great sensitivity to timbre and its combinations in dazzling ensemble textures.  Even in a symphonic concerto, he displays a masterful chamber music sensibility.

The Trio sur des mélodies populaires irlandaises of 1925 is cherished by chamber music lovers.  A truly scintillating jewel from his earlier period, the piece was apparently commissioned by an American amateur musician requesting something based on Irish folk music.  Martin, the scholar, teacher, conductor, performer and musicologist took to studying collections of Irish folksongs at the Bibliothèque Nationale in Paris and used at least ten authentic tunes to weave the fabric of his three-movement Irish ‘fantasia’.   The Trio fits beautifully alongside those modern works that were apt to shock and befuddle a conservative ear.  With our contemporary advantage and perhaps less familiarity with the traditional Irish canon, the Trio shines: tonal, tuneful and positively lilting with colourful dance, it is saturated with a delightfully unmistakable Irish character.

The work comprises three movements.  The first started atmospherically and obliquely, almost in Debusseyean fashion, but instantly, it evoked the impression of a Celtic country peasant dance with its accents, modal tune, the suggestion of pipe and drone.  The music was a gradual expansion of tempo, colour and weight with many thematic variations across numerous rhythmic changes until the dance seemed to ring throughout the charged air.  The slow movement, an Adagio, took a mournful cast with a tune on the violoncello, wonderfully executed by Ann Sophie Keckeis, that had a simple falling motif, like a nursery rhyme, a slow ostinato in something like a French chaconne.  When the piano joined in, one could really hear Martin’s love of intricate multiplicity as two quite different tunes combine, fitting together while remaining distinct, particularly for the crystal clear textures.  This tendency for complex simultaneity ran throughout all three movements. The finale was easily the most stereotypically Irish from the onset: a sprightly Gigue (Jig) in 6/8 time whistling a medley of tunes you were certain you had heard before.  Between the lively fiddle, the bristling rhythms, both modern and folk, the brilliant colours and Martin’s shifting collages of sound, one breathlessly wondered why this composer does not feature more regularly in concerts worldwide!

The end of the recital was greeted with warm and sincere applause from a delighted audience.  Certainly, the chamber music series was off to a flying start. 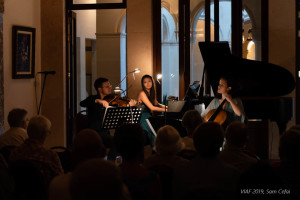 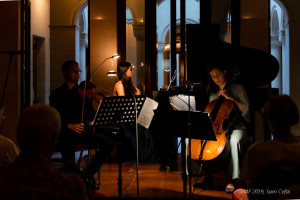 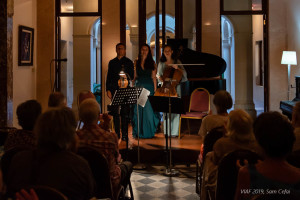 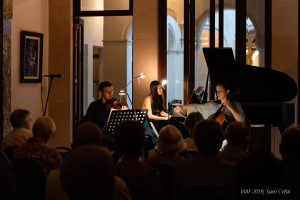