Natascha Chircop and Marco Rivoltini rank among the best pianists on the islands, and in duo formation they are nothing short of formidable.  Their musicianship, technique, and seamless coordination are all manifest in their impeccable performances, and the one given in the Victoria International Arts Festival on Friday 29 June was one such event.

The concert started with John Corigliano’s Gazebo Dances.  Corigliano’s title, Gazebo Dances, is derived from the dance music played by bands in New England country towns. These groups usually play in pavilions, or gazebos, while the public listens and dances. Three of the four movements refer to traditional types of pieces both in title and in style.  From the very first notes played, the audience knew it was in for a rare treat: two stupendous pianists in perfect sync, playing beautiful music with all the nuanced shades it requires, coupled with a formidable sense of rhythm that is nothing less than humbling!

The Overture, called ‘Rossini-like’ by the composer, exhibited the contrasting moods and rhythmic build-up one invariably associates with the Italian opera composer.  Jazz elements were clearly in evidence from the beginning, as were dance rhythms, suggested by the title of the piece. Aggressive chords opened the Overture, which then gave way to a more tuneful segment.  Repeated notes began dominating the movement in the middle section and continued through to the end, which included a brief reference to the initial tuneful passage that rounded out the structure.

Corigliano described the waltz movement as ‘peg-legged’, no doubt because of its irregular accents.  Unlike a genuine waltz, the stress is not always on the first beat of the 3/4 measure.  Highly sectionalized and often hesitant in mood, the movement ended very quietly.  The longest movement in performance, the Adagio opened with repeated chords that helped create the illusion of sustained melody.  Slow and haunting, the opening theme dissolved as a more linear, double-note idea injected the music with more life, punctuated by deep bass notes.  Gradually, the piece thickened as both the dynamic and dissonance increase.  The tension was released as the music suddenly halts, after which bright chords descended from the highest register.  Slowly and hesitantly, the linear section began again, bringing the movement to a close.

The Tarantella commenced with a trochaic figure that soon accompanied the bouncy and rising main theme of this ABABA-form movement, the shortest of the four.  The contrasting B section featured deep bass thunder as a repeated octave figure began in the highest register.  The first return of the A material was nearly literal, while the first return of section B began with a new idea.  Corigliano drastically thickens the last A section, which closes with wild trills.  This was truly a spellbinding performance!

Next came Paul Schoenfeld’s Five Days from the Life of a Manic-Depressive.  As the title implies, this work, consisting of five distinct movements, fluctuates unpredictably from one mood to another, with swinging emotions heightening the register at every turn.  Evidently, this piece is not easy to hold together, and it takes the experience and maturity of such pianists as Natascha and Marco to keep it from falling apart!  The work is almost programmatic, in that it follows Schoenfield’s imaginary protagonist through the heights and depths of a disorder that has often been associated with artistic creativity in general, and musical creativity in particular (as, for instance, Robert Schumann).  “The psychology of the music is so penetrating that one is not sure whether to laugh or gape in awe of a mind so warped”, writes Stephen Smoliar.  The five-movement work is a  dramatic and affecting set of a sequence of narrative numbers that outline a manic/breakdown/depressive/blues-rag/ultra-manic-boogie trajectory starting with a tribute to Louis Armstrong followed by ‘Labyrinth’, where, predictably, one could get lost in rhythms, clusters of sound and contrasting tones.   Elegy was beautifully if eerily atmospheric followed by a strongly flavoured Jewish ‘From a Bintel Brief’, referring to a Yiddish advice column in New York at the beginning of the 20th century which printed questions and answers of new Jewish immigrants.  Boogie was the final movement which boiled over with energy across its four-minute span.  The lower voice often laid down a furious ostinato as the upper contributed a wild melodic energy of its own; at other times the melodic line moved easily between the two players as Boogie rushed to an almost breathless close.  This was one piece that could be listened to time and time again; such was the diversity of its colour and variety of its rhythm!

The final item on the programme consisted of Ravel’s La Valse.  This gorgeous work is both nostalgic and sinister, rising from nothing but a vague rhythmic pulse, proceeding through several distinct waltz sequences (much more closely linked thematically than in any Strauss waltz), each culminating in an increasingly powerful crescendo and ending in apocalypse.  Along the way came disturbing accelerations and delays (making this particularly unsuitable for ballroom dancing), dynamic extremes, and eerie glissandi, creating an atmosphere of violence, decadence, and decay.  In short, as Ravel himself intended it, La Valse is a portrait of Vienna (and Europe) in the years surrounding World War I.

The final chords of this work brought a well-merited exuberant reaction from an enthused and highly-entertained public.  A great concert indeed! 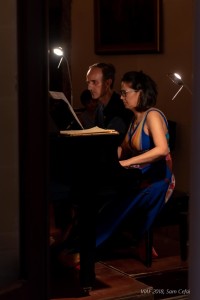 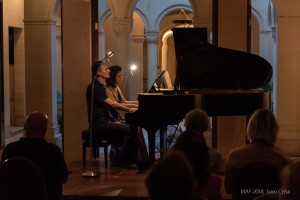 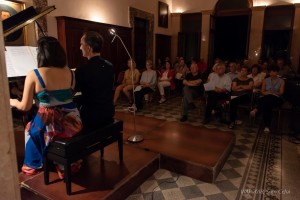