Chamber music is a genre that appeals to most concert goers. Some eschew the larger structures of symphony orchestras and great choral ensembles. There is something exquisitely charming about chamber music, intimate and personal.  You feel it is talking to you directly – you don’t feel lost in a crowd here.

There is a variety and diversity to the notion of chamber music that surpasses expectation. On Monday 26 June, the German ensemble KlangEssenz mesmerised a packed church at St George’s Basilica with their finesse and sophistication. Comprising of Jörg Schneider (Oboe), Christoph Knitt (Bassoon), Sonja Starke (Violin), Christian Götz (Viola), and Alma-Sophie Starke (Violoncello), this is no ‘normal’ formation for a chamber quintet. It is all the more to the credit of the ensemble that homogeneity, interaction, and blending were the hallmarks of their performance.

The works chosen for performance were two transcriptions of quintets by Hoffmeister and Onslow. Starting with the Hoffmeister, the quintet is in 4 movements, with the ensemble opting out of the slow movement simply because its mellowness could not be quite captured in transcription.

The opening Allegro was the typical classical movement that relied heavily on form for its cohesion. The instrumental colour was exquisitely balanced and points of dynamic interest involved the interaction between the higher tonal textures of the oboe and violin with the lower instruments.  This opening Allegro made an initial announcement which was assertive yet full of the grace and poise one associates with the Classical style.  All instruments played on an equal footing in concert, as it were, and the blend was well-knit while the vista it proffered is panoramic.  In contrast, the second theme of this movement was ethereal and had a dream-like quality to it that brought it close to a Brahms slow movement.  The second movement was a charmingly-woven Menuettino, a piece that fully embraced the dainty elegance one associates with this dance form.  The final movement was an Allegro molto, which was robust, powerful and confident in tone and style.

George Onslow is very unfortunately a largely forgotten composer.  It is really hard to believe that a composer whose chamber music Schumann and Mendelssohn ranked with that of Mozart, Beethoven, and Haydn, could fall into obscurity.  Perhaps no composer, more than George Onslow, illustrates the fickleness of fame.

The work chosen for performance during the evening was Quintet in C Minor op. 80 no. 33.  The opening movement, an Allegro grandioso, began with a dramatic chromatic theme of triplets, while the second subject was a lovely lyrical melody.  As in the first Quintet by Hoffmeister, the ensemble were constrained to leave out the second movement, a Scherzo.This was due to the unplayability of the movement in transcription.  The third movement, Andante sostenuto, came across as a quiet pastorale of great beauty.  The incredible finale, again Molto vivace, was a true ‘moto perpetuo’, brilliantly executed from start to finish.  This was, without doubt, one of the most exciting quintets we have heard in VIAF in recent times.

Throughout, Ensemble KlangEssenz displayed virtuosity and musicianship in abundance. It was a formidable performance on all counts. 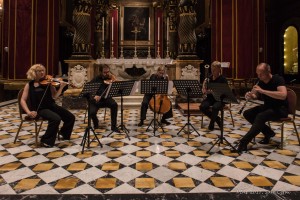 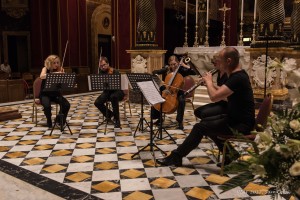 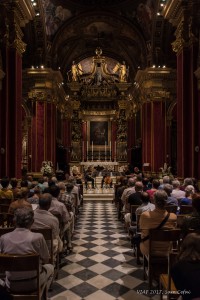 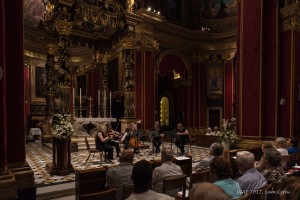 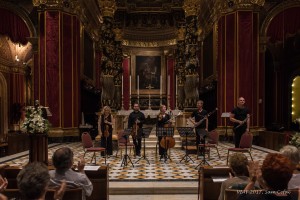 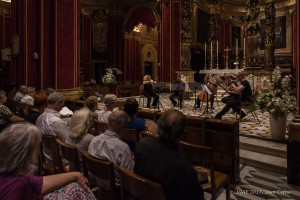 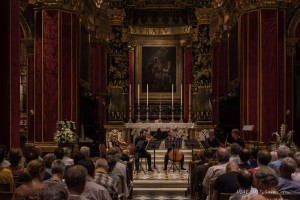 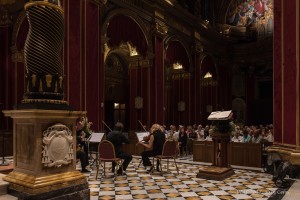