There are a handful of artists whom “age cannot wither”.  They get better with time, when you think you’ve heard them at their peak they surprise you with further achievement.  They also come with a baggage of endless humility and respect.  These are artists on whom dreams are built.  Such are Daniel Veis and his wife Helena.

The Victoria International Arts Festival offers a yearly panoply of chamber concerts that dazzle in their endless variety and diversity.  This year alone there were some 26 different chamber ensembles in every conceivable formation and combination of instruments.  Yet, one staple concert remains constant, and that is the performance given by Tchaikovsky award-winning cellist Daniel Veis and his pianist wife Helena.  His are programmes that offer a substantial intellectual challenge tempered with a measured dose of emotional excitement that leaves patrons in awe every single time.

This year’s concert opened with Beethoven’s Sonata in G Minor op. 5 no. 2, an early, two-movement work.  The main theme of the opening Allegro is brief and could be heard once in each instrument before being subjected to motivic transformation in the transition to the second theme area. On the relative major (B flat), the second theme had a shape exactly the opposite of the first.   The implications of the ‘flat’ harmonies in the introduction were realised in both the second theme area and the brief development section.  The Rondo finale proved to be a vehicle for virtuosity that must have tested the limits of even the best players of the time, yet was comfortably tackled by Daniel and Helena.  What always impresses the audience is the sheer beauty of the cello’s tone, big, rounded, lush and beautiful, capable of the tiniest nuance of colour imaginable, with a tonal and dynamic range that offers a myriad possibilities for interpretation.

Next on the programme came Debussy’s Sonata in D Minor, a massive work in all aspects, whether technical, interpretative, or emotional. Although they represent only half of a projected series of works, Debussy’s three chamber sonatas bear testimony to the composer’s developing identification with a more abstract, that is, less visually, textually, or otherwise extra-musically oriented, musical process.  The first of these works, the Sonata no. 1 for cello and piano (1915), is cast in three movements, the last two of which are played without break.  In the capable hands of the Veis duo, the Prologue opened with a noble keyboard statement in D minor, well defined harmonically (an unusual feature in Debussy’s music) and tinged with modal colour, to which the cello provided a highly ornamental response.  The entire movement is but fifty-one measures in length, yet in the interpretation given this evening it encompassed a wealth of expression.  Throughout, musical phrases were allowed to develop and collapse with no clear boundaries; as with much of the composer’s later music, the distinction between melody and ornamentation was deliberately obscured – form was indistinguishable from content, a staple feature of impressionistic art.

The absolute saturation of the ensuing Sérénade (marked Modérément animé) with the percussive tones of the cellist’s pizzicati came as a great shock to Parisian audiences of Debussy’s own time.  The few arco passages that invaded the texture quickly dissolved away, save for an outburst of triplet rhythms midway through the movement.  The bass staccati on the piano served to make the occasional melodic, legato inserts all the more powerful.  The finale, marked Animé, followed without pause. At one hundred twenty-three bars, it is of greater length than the two previous movements together.  Although in performance its quicker tempo compensates for its proportions to some degree, a great deal of the Sonata‘s musical weight is invested in this energetic movement.  Debussy calls for the cello to play with a “light and nervous” character, while he includes no fewer than seventeen tempo indications that emphasise the psychological tension.  Daniel and Helena Veis allowed the music to build to several climaxes, only to have the bottom drop out each time in one of Debussy’s favourite musical strategies.  The cello made a final, glorious passionate, unaccompanied melodic plea, as at the beginning of the entire work, before the Sonata concluded in a flurry of great percussive strength, one that is more akin to a consort of instruments than just two!

Richard Strauss’ Sonata in F Major op. 6 closed this wonderful programme.  This work is in three movements: Allegro con brio, Andante ma non troppo, and Finale: Allegro vivo, and showcases both Strauss’ lyrical melodic writing for cello and his considerable understanding of the piano.  Many of the formal difficulties evident in Strauss’ earlier efforts, such as excessive repetition, are resolved in this piece as variation reveals itself as a burgeoning and important aspect of his compositional style.  The first movement, in sonata form, featured a multiplicity of themes in a kind of amiable dialogue between the cello and the pianoforte.  Each theme was actually a group consisting of two contrasting themes: the first and second groups contrasted with one another, obliging the typical practices of sonata form, but the themes were also internally divided, each group having one strong, declamatory theme and one of a more gentle, lyrical nature.  The movement otherwise closely followed standard first-movement principles and was notable also for the incorporation of a skilful fugato.  The second movement came across as a chorale, gorgeously played, with a soft yet full-bodied palette that was simply disarming.    The final movement was contrastingly delivered in a humorous, mildly ironic manner; it is a canonic Allegro, marked by adventurous harmonies and a light-hearted and rhetorical use of silence that foreshadowed Strauss’ later works.  Although the influence of Mendelssohn is clearly present, early indications of Wagner’s increasing influence on Strauss are also in evidence.

Prior to this last work, Daniel Veis addressed the audience in his soft, courteous and humble way.  He paid tribute to the greatness of Mro Joseph Vella and as a homage he performed the Mro’s wonderful Elegy for violoncello and pianoforte.  This was delivered with a poignancy that verged on the unbearable, an overarching melody that could not fail to move the audience.  Such is the greatness of great music; when performed by world-class musicians it rises to unprecedented heights and is immortalised for ever! 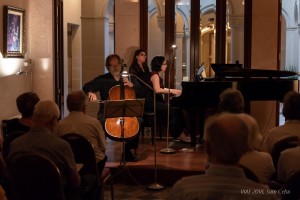 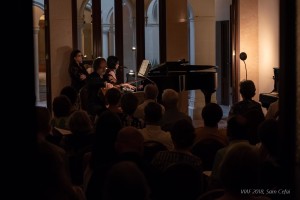