On Friday 19th June, we had a special treat in the form of the utterly splendid brass ensemble from Edinburgh, the Royal Conservatoire Brass under the direction of their dynamic and charismatic conductor John Logan.

A group of graduates who are still so very young but whose expertise, mastery and discipline belie their age, gave a thoroughly enjoyable and highly successful concert of classical, semi-classical and jazz numbers on the roof-top of Il-Ħaġar Heart of Gozo, a wonderful open-air venue that lends itself beautifully to ensembles such as the one we had on Friday. Although the organizers were not a little apprehensive about the unexpected wind that whipped itself up to a mild frenzy the evening before and which had not quite abated by the time the concert was about to start, yet, all’s well that ends well when one is blessed with a group of splendid young men who, together with the ever helpful Mgr Joseph Farrugia, curator of the Museum, did all it took to make this a most memorable evening of great music.

Starting their concert with three major works in the classical mode, namely, Benjamin Britten’s Fanfare for St Edmundsbury, Bach’s final movement from his Brandenburg Concerto no. 2 in F Major BWV1047, and on to Liszt’s formidable Hungarian Rhapsody no. 2, the ensemble showed its consummate mastery, both technically and musically, interacting seamlessly as an ensemble and coming forth as soloists in their own right. Nothing beats the nobility of sound from a consort of trombones, and this was one such tone! Round, deep and sonorous, it was truly a joy to hear, while the trumpets worked miracles with the rippling repeated notes and frenetic speed that Liszt’s work demands. On the other hand, classical poise was sustained and maintained through Bach’s final movement of his Brandenburg Concert no. 2. Worthy of mention here was the tuba player, Rachel Brown, who exhibited sheer virtuosity in her playing of what should have been a continuo! Meanwhile, Britten’s Fanfare for St Edmundsbury gave a golden opportunity to the three trumpeters to perform a devilishly difficult work with such impeccable co-ordination and control.

Högberg’s John and Clint is charmingly known as the Trombone Duel.  Before you imagine trombones taking aim at one another, I hasten to add that it was a showpiece for tenor and bass trombone. Technically it is not the most demanding of pieces although the tenor trombone part does require a trombonist with an incredible upper register as it ascends to F#5.  The piece also involved some acting and interaction between the two performers, as befits the ritual of a duel! Nyman’s piece entitled For John Cage is a difficult work to accomplish with any merit and the ensemble tackled it with assurance and confidence, creating balance and rapport amongst the various instruments that was impressive. The final three pieces by Ellington, Garner and Quincey Jones were sheer entertainment, with their jazzy rhythms and bouncy pace. No fewer than 3 encores were given as the audience which thronged the roof-top kept asking for more!

We hope to welcome Royal Conservatoire Brass for more concerts in our Festival. It is always a great pleasure hosting them here and we thank them for the fun and high standard performances they give us! 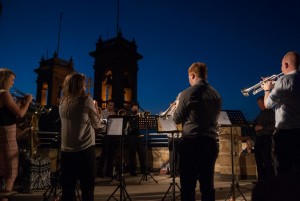 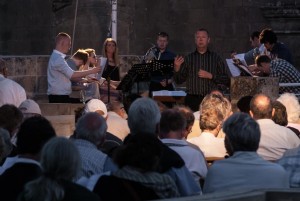 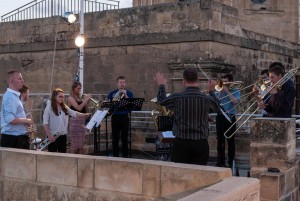 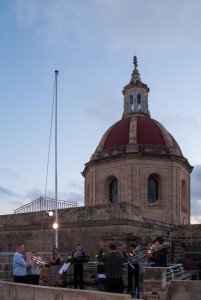 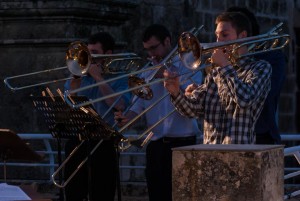 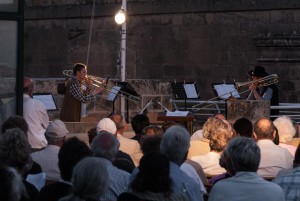 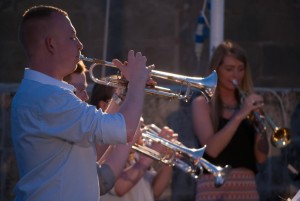 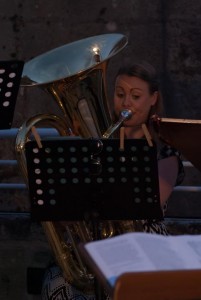