Arguably two of Malta’s finest musicians, Natascha Chircop and Marco Rivoltini, will perform as a piano duet on Sunday 3 July, at the Aula Mgr G. Farrugia, 8pm.  They have devised a programme of works by Hindemith, Poulenc, Brahms, Shawn, and the fabulous Rhapsody in Blue by George Gershwin.

Certainly not to be missed by all!

Duo Chircop-Rivoltini started working together in 1995 when they followed a two-year course in chamber music at the Academy of Florence, Italy.   They have performed locally at the Manoel Theatre, at the Mediterranean Conference Centre, at the President of Malta’s Residence, and at the Victoria International Arts Festival, Gozo.   They gave the world premiere of Joseph Vella’s Concerto for Two Pianos at the Conservatory of Marseilles with a repetition of this work at the Lincoln Centre, New York.   They have also performed at the Abbazia di Viboldone, Milano.  Performances with the Malta Philharmonic Orchestra include Poulenc’s Concerto for Two Pianos, Saint-Saëns’ Carnival of the Animals, Arnold’s Concerto for Piano Duet and Strings, and Concerto for Three Hands, apart from works for two pianos by Bruch, Mendelssohn, McDonald, Tansman’s Suite for Two Pianos, and Britten’s Scottish Ballade for Two pianos.  Other performances have taken them to France, Syria, England, Italy, and New York.  They have recorded for Rugginenti and original contemporary Maltese works by Joseph Vella.

Natascha Chircop studied at the Conservatory ‘G.Verdi’, Milano, where she graduated in Pianoforte and Flute.  She also graduated in chamber music at the Academy of Florence, Italy.  She is a holder of diplomas in both instruments from London’s Trinity College of Music and The Royal Schools of Music, and a B.Ed (Hons) degree in music from the University of Malta.  Concerts as a soloist with orchestra include the Piano Concertos of Franck, Jirásek, Grieg, Ravel, Pace and Vella.

Marco Rivoltini graduated in Pianoforte at the Conservatory ‘A. Boito’, Parma, and in chamber music at the Academy of Florence and at the International School of Chamber Music held by the Trio di Trieste, Italy.  He has also graduated in Music from the University of Bologna.  Marco has won the competitions of Sesto San Giovanni, Stresa, Macugnaga, Tagliolo Monferrato, San Bartolomeo, ‘Mascia Masin’ in San Gemini, and Asti, Italy.  He has given recitals in various musical manifestations in Milano, Arese, Rome, Alassio, Novara, and Lucca. 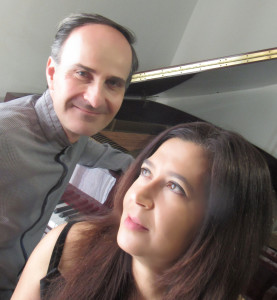