As anticipated, Young-Choon Park’s pianoforte recital on Tuesday 16th June was a formidable one, a performance that is not likely to be forgotten in a hurry. A consummate performer, both technically and musically, she is a Classicist at heart and her interpretation of the Classical genre is well-nigh excellent. She performed to a packed house.

Starting her recital with Haydn’s Sonata in B Minor Hob.XVI:32, a calm and composed mood was immediately set. Brilliant articulation and exquisite dynamic control were the hallmarks of this work. The opening figure assumed some importance as the movement progresses, used to open the central development and the due final recapitulation. The second movement is a B major Menuet, an instrumental rather than a dance movement. It framed the B minor equivalent of a Trio section, although this is not so marked. The final Presto offered a principal theme introduced by five repetitions of the key note and abruptly interrupted in its course. There is a D major second subject in rapider notation before the central development, starting with a brief passage of canonic imitation, and the closing recapitulation included further use of rippling octaves, most notably in the final bars.

Next came Schubert’s Sonata in A minor op. 42 D. 845, a monumental work in its own right. Stylistic criticism of the Romantic Sonata offers the greatest difficulty to musicology. On the one hand, the Romantic Sonata clings to the formal stylistic factors of the Classical Era while, on the other hand, it seeks to eradicate boundaries and architectural logic. In the Sonata genre, Schubert is mentally confronted by Beethoven – not an easy contender, and an unenviable task to accomplish with any merit. Yet, there is one area in which Schubert excels that Beethoven does not seem to have had a natural disposition for – the singing voice. Essentially, Schubert’s architectonic power centres on his thorough understanding of the singing ability of the instrument he is writing for. In addition to the twelve completed Sonatas, there are ten unfinished ones ranging in length from a few dozen bars to a three-movement work that lacks little apart from its first movement recapitulation.

The Sonata in A minor, D. 845 stands as far from the Sonatas composed during Schubert’s teenage years as one might imagine. Something of the terse, granite-faced quality of the previous A minor Sonata D. 784 of 1823 is present in the opening movement, Moderato, of the evening’s work, but now there is also a hint of the starry-eyed otherworldliness — an absolute disdain for reality — that mark the final Sonatas of 1828 as things truly special. This intellectual approach towards the work was firmly grasped by Young-Choon Park, who admirably always managed to maintain that Classical objective distance which no subjective intimacy spoilt or marred in any way. The limber main theme is given right at the start in bare octaves; the second theme, presented in part before we have even arrived at the second theme key area, came across as really a new spin on the opening idea. Throughout the development section and, later on, the lengthy coda to the movement, the music of the opening bars reappeared at length.

The following movement, an Andante poco moto, is an ingenious and technically demanding set of variations (five in all) on a theme. The Scherzo – Allegro vivace, contrasted a squat, rhythmic opening with a Trio section that, while retaining the same basic metric framework, remoulded it into a spinning pianissimo. The finale, an Allegro vivace, is a Rondo built around a lean main idea; there is no contrasting lyric material, only music that either scampers around or asserts itself with dramatic sforzandos.

The final work on the programme was yet another Sonata, this time by none other than Chopin. After Gabriele Vianello’s truly impressive rendition of Chopin’s Sonata no. 2, with its haunting Funeral March, this time it was Sonata no. 3 in B minor op.58. Although it is unarguably a Romantic work, here, Chopin comes as close as he would ever get to the Classical mood. The choice of a Sonata as opposed to his other wonderful miniature works such as Mazurkas, Etudes, Ballades, Scherzos, Waltzes, etc, makes him stand tall alongside other giants of the Classical period who wrote in the genre.

The first movement, Allegro maestoso, falls into traditional Sonata form, constructed from a decisive and sometimes impulsive first theme and a more extended second theme, highly lyrical with a detailed accompanimental filigree – music that would not be out of place in Chopin’s Nocturnes, for instance. Young-Choon Park tackled this lengthy movement with assurance, confidence and poise. The musical texture thickened considerably in the central development section; Chopin, in fact, devotes long passages to variants on the second subject, but much of the development is highly contrapuntal. Following the recapitulation, which again emphasized the second subject, the movement ended with a surprisingly peaceful coda.

The very brief Scherzo, molto vivace, uses light, fleet, but finger-challenging Eb outer sections to frame a gentle and pensive Trio section in B major. The pianist’s touch here was like filigree, skimming over the keyboard with breathless speed and equally breathless ease! The ensuing slow movement, a Largo, came across as the heart of the Sonata, conceptually as well as rhythmically. Stern but harmonically ambiguous chords led to a delicate, nostalgic aria supported by a gentle heartbeat figure in the bass. This was soon supplanted by a long, flowing, rhapsodic section of quiet rumination.  The opening theme, now with a more murmuring accompaniment, returned in more ornamented garb to escort the movement to its conclusion. The final movement, Presto, non tanto, made a short transition from the Largo with a few swelling introductory bars that led to the urgent, driving first theme of what turns out to be a Rondo; this B minor material alternated with a contrasting, chord-launched section in the major mode designed to showcase the performer’s agile finger-work. Elements of both sections overlapped for a grand coda.

This was an exceptionally magnificent work indeed, and we are so lucky to have heard 2 of Chopin’s 3 Sonatas in under a week!

Young-Choon Park proved to be a most professional performer, not only because of her undoubted talents and preparation but also because on the day of her concert she was suffering from a viral infection that left her practically confined to her room for the previous 24hrs. The organizers thought it fit to be discreet and not mention the mishap before the performance.  It would have put unnecessary added pressure on the performer and would have probably conditioned the way people listen. As it turned out, the performance was impeccable, albeit one that was carried out under some serious duress!

The presence of such accomplished musicians in our Festival contributes in no small measure towards the wonderful reputation VIAF is rapidly gaining for itself! 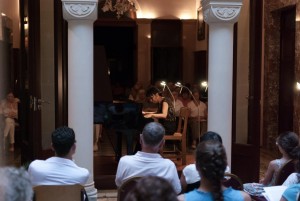 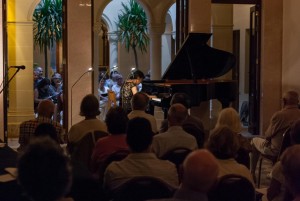 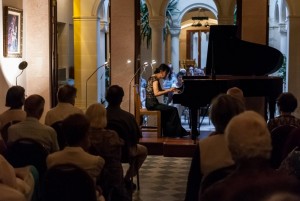