On Tuesday 14 June, VIAF hosted duo Jože Kotar and Luca Ferrini on the clarinet and pianoforte respectively. Kotar is Principal Clarinettist with the Slovenian Symphony Orchestra, while Luca Ferrini is an Italian musician based in Slovenia, an fully-qualified pianist, harpsichordist, and organist. Together, Jože and Luca team up in a formidable duo that attests to their musicianship, brilliant technique, and intelligence.

The Clarinet’s silky tones and superb legato captivated the audience – lately we have had a most welcome dose of wonderful sounds emanating from the clarinet to include Godfrey Mifsud’s superb rendering of Mozart’s Clarinet Concert. The concert started with Stanford’s Clarinet Sonata op. 129. This Sonata, with distinct echoes of Brahms, started with a sonata-form movement, with a third theme in Ab major that is alluded to once more in the final section. The slow movement, with the title Caoin e(Keen), an Irish lament, marked Adagio (quasi Fantasia), allowed the clarinet to explore its possibilities in runs and arpeggios, while the pianoforte from time to time echoed the Irish harp in its arpeggiated chords.  Brahms returned in the final Allegretto graziosoin which the opening rhythmic motif assumed some importance, and a secondary theme made use of the lower register of the clarinet.  The movement ended in hushed tranquillity. Throughout the performance of this work, the duo maintained a perfect balance, with each musician making forays to the foreground and background as the music necessitated.

Next on the programme was Widor’s very well-known Introduction et Rondo op. 72, a virtuosic and idiomatic work which was written in 1898 to fill a request from the Paris Conservatoire for a solo de concours (solo competition piece) for clarinet with pianoforte. This work has remained a favourite of accomplished clarinetists, allowing the soloist ample opportunity to showcase both versatility and technique by alternating lyrical melodies with bravura passage work.  A truly brilliant execution of a very difficult work.

Two Vella pieces followed a brief interval, namely, Passacaglia op. 9 and Segments no. 3 op. 95. Typical of the composer is the way this serial material is organised to almost hint at tonal roots. As the title implies, the work follows the passacaglia principle, this again, in a rather loose manner.  The four-bar block announced by the pianoforte served as the basis for ten variations together with another one for pianoforte solo in the middle, this time extended to six bars.  Right after the latter, the Clarinet playing in the most seductive piano tone, first picked up the opening pianoforte right-hand figure.  The music then slowly built up towards a climax as each successive variation became more busy and intense.  The initial pianoforte figure also served as the basis for a codetta to round off the piece.  Segments is a more recent work, and the development of the composer was in evidence here.  Marked Andante mosso, Vella created this work with contemplation in mind, and lent it a syntactic density and homogeneity that demands singular attention to its sonorous content.  The instrumental pieces not only leave aside imagery or fantastic analogy, they are so aloof to imitative possibilities that they often seem positively discharged of concrete associations.  They rebuff dramatic or prosopopoeic interpretation.  The result is a mute art of instrumental music, which provides a key to his vision of a new musical poetics that instead of imitating reality would create transformative fictions whose beauty, depth, and intensity might rival reality itself.  The segments in this composition are not really segments in the sense of clear-cut divisions.  Rather, they are, in fact, knit into one continuous fabric from beginning to end.  Throughout the piece, the semiquaver served as the basic time unit (9/16, 12/16, 6/16, and 3/16) with a short section towards the middle of the piece in 2/8 and 4/8 time.   Kotar and Ferrini gave a superb rendition of this intellectually demanding work, and in fact, they also perform this, alongside the Passcaglia, regularly in their concerts abroad.

Charles Camilleri’s Four Greek Songs followed on Vella’s works.  Very different to Vella’s cosmopolitanism, Charles Camilleri is more interested in the folk element of Maltese music.  In fact, his well-known Malta Suite is a testament to Camilleri’s interest in the folk and popular genre.  Four Greek Songs is a work that betrays a strong interest in popular music, this time Balkan.  In these four miniatures, Camilleri expresses the light-hearted moods and more pensive ones in four discrete movements, largely based on a slow-fast-slow-fast tempo markings.  Noteworthy is the cadenza on the clarinet in the first movement.  Throughout, the clarinet’s virtuosic potentialities were fully brought out by Kotar, while Ferrini’s piano playing did not just limit itself to an accompanying role but came to the fore when the occasion demanded it.

Luigi Bassi’s Fantasy on a Theme by Bellini (I Puritani) came next.  As the title Fantasia indicates, the work is basically a virtuoso piece that showcases the brilliant technique of the soloist. Taken from the numerous melodies one invariably finds in a Bellini opera, the work unravelled in all its complexity through the dazzling colour and tonal beauty that Bellini endowed his works, and the Kotar was very careful to emulate. This work came across as a tour de force for the soloist, with the pianoforte undoubtedly played a most important role not only as accompanist but also as companion to the clarinet. Perhaps most memorable was the interpretation that the Duo gave to A te o cara, arguably one of the most ravishing melodies in the canon.

The last item on the programme was Phil Parker’s Grooves.  The piece was endowed with the panache and fun that seasoned performers can afford their interpretations.  The first movement, Bop, was characterised by strong rhythmic patterns, displaced rhythms and syncopation, the work has a jazzy feeling to it.  Hocket and Rock It, the second movement, was slightly slower in tempo, and acted as the middle movement of a classical Sonata.  Making use of a basic rhythm on the pianoforte, the melodies unwound on the Clarinet in a fragmented manner.  There was an element of blues to the mood, which soon dissolved in a more hectic moment with the Clarinet tackling the upper reaches of the tonal range.  A winding melody on the Clarinet followed, after which the pianoforte entered with softly-played chords constituted of piquant harmonies.   The mood was dreamy and quiet, so tranquil and unperturbed, providing a stark contrast to those of the previous two movements.  An extended interlude, on the pianoforte ensued.  This was played in a romantic style, after which the texture became more rhythmic and assertive.  Sultry Waltz was a feverish and exciting final movement, heavily rhythmic and punchy, with dislocated rhythmic patterns, angular phrasing and pyrotechnical leaps and bounds, on both instruments.  The tempo became frenetic towards the end, and after a dazzling cadenza-like run on the Clarinet followed by a quick glissando on the pianoforte, the work came to a brilliant close.

This was a wonderful piece to round off a recital with.  It was extremely virtuosic for both instruments and is one that certainly needed the brilliant technique and maturity of Jože Kotar and Luca Ferrini to carry it off.  The spontaneous and enthusiastic applause was a well-merited reaction by the numerous patrons that filled the concert hall. 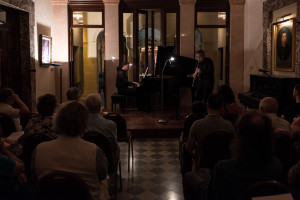 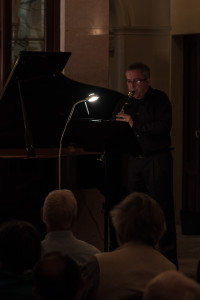 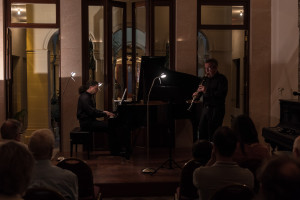 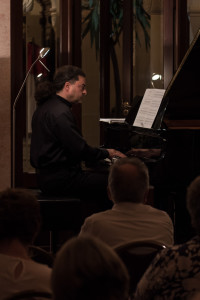