On Monday 20th June in the evening, the Victoria International Arts Festival rolled out the first in a series of five Baroque concerts that have become a staple within the wider framework of the Festival.

Featuring the very young duo comprised of soprano Valeria la Grotta accompanied at the piano by Attilio Cantore, the programme featured works from the very late Baroque period and the Rococo/early Classical. Worthy of mention were two arias by none other than Maltese-born composer Nicolo Isouard, who made a name for himself in the genre of
opéra comique in Paris and beyond.  Valeria la Grotta interpreted ‘Je suis modeste et soumise’ from Cendrillon, and ‘J’ai longtemps par couru le monde’ from Joconde. Although still a student at the Conservatorio Niccolò Piccini, Bari, specialising in opera performance, Valeria manifested a maturity in technique which was beyond her age.  She tackled not only the technical difficulties with relative ease, but she also betrayed a musical understanding of the score that attests to her rigorous discipline and study.

Other works performed were by Méhul, namely, ‘Ah! Lorsque la mort trop cruelle’ from Joseph, Piccini’s ‘Sono in mar non veggo sponde’ from Nitteti, Sarti’s ‘Ah! Mi tolga almen la vita’ from ‘Armida e Rinaldo’, and Grétry’s ‘Far l’orror della tempesta’ from ‘La caravane du Caire’.  In Méhul’s aria, the composer uses a self-consciously austere style, the musical counterpart of the pure and noble faith of the Hebrews.  The texture is almost throughout as simple, touching, rich in felicitous, though not very daring modulations, full of broad and vibrant harmonies and graceful figures in the accompaniment, while its expression is always true.  Valeria sang with grace and refinement, bringing out the nuances of the text in a most expressive manner.

Sarti’s aria further confirmed the soprano’s promising potential: this aria is one that is technically most demanding, with devilish coloratura and extensive range, both tonal and dynamic.  There were huge leaps that virtually spanned the entire gamut of the soprano range, and apart from the exquisite legato there was also staccato notes towards the end.  The voice was the absolute protagonist here, virtuosic and powerful, with the occasional cadenza thrown in for good measure.  There were daring shifts in key and the rhythmic patterns alternated between the predictable and the unexpected.  Another such formidable piece was the last one, namely,  Grétry’s ‘Far l’orror della tempesta’, one that perhaps requires that little more maturity to carry off with aplomb.  That said, the vocal contours of the soprano came out appropriately dramatic and declamative, urgent and robust.  This was a graphically pictorial aria in that both the words and the melodic lines enacted the narrative of the text.  It is high-pitched, well-rounded, and full of syncopated rhythmic patterns that demanded superb breath-control to sustain the long legato phrasing and extremely high tessitura without the risk of it collapsing into a shouting match with the accompaniment.  It is a veritable tour de force for the soprano.  A very well-merited applause greeted the end of this very difficult aria.

In between the singing, Attilio Cantore played a few pieces by Cimarosa, Turrini, Clementi, and Cramer.  Attilio possess an undoubted technique that one imagines could help him tackle with a measure of success repertoire from the Romantic period.  His is a robust and forceful touch that could perhaps be tempered somewhat to fit the Baroque and early Classical style more adequately.  He proved a very sound and secure accompanist, filling in and supporting the soprano throughout. 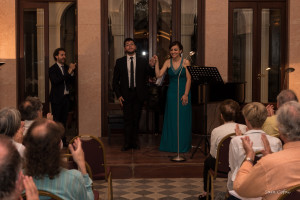 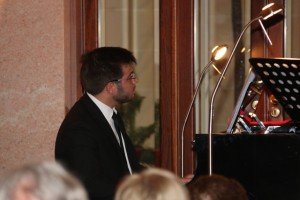 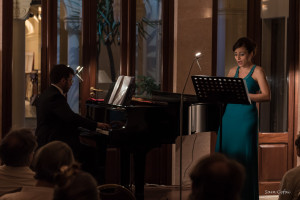 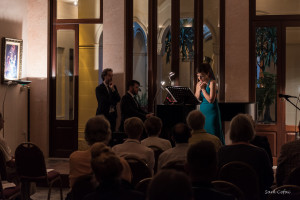 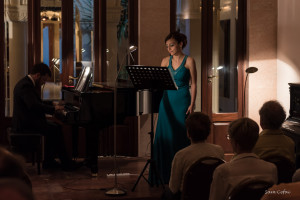 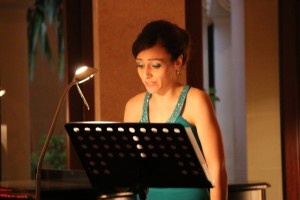