Yesterday, VIAF‘s concert was held at the Bishop’s Curia Hall, kind courtesy of H.L. Mario Grech, Bishop of Gozo, who also honoured us with his presence during the concert.

Pierre Henri Xuereb (Viola), Vincent Beer-Demander (Mandolin) and Hélène Dautry (Violoncello) presented a most delightful concert of works that saw them play as a trio, in duo formation and also as soloists. As a trio, the ensemble manifested its sensibility as first-rate chamber music performers. The rapport amongst them was exquisitely well-tempered and balance was kept throughout. This came out mostly in the last two pieces, namely, a Trio by Houdy and two pieces by Cosma. In the latter, the mandolin shone with its brilliant articulation and clarity of tone. In fact, this was a most impressive and remarkable performance by the Trio and while the viola and the violoncello are staple instruments in the classical orchestral context, the mandolin is not. However, in the hands of Vincent Beer-Demander, the mandolin was raised to unprecedented classical standards, very much in the way that the guitar is raised to such heights in the hands of a master.

The programme started with a Scarlatti work, Prelude and Fugue K88 for mandolin and violoncello. Both had melodic and harmonic interest and the interplay between the two instruments was charming and delightful throughout. Vanhall’s Divertimento in C Major  for Trio is a four-movement work.  Extremely classical both in structure and in poise, this work anticipates the more formally elaborate works of Beethoven. Two solo works presented during the evening were by Joseph Vella. Vella has known Pierre Henri for more than three decades and their long-standing professional relationship has seen numerous concerts performed and new works commissioned. The evening’s two new works were In a pensive mood op. 141 and Variations on a Maltese folk tune op. 138, for viola and mandolin solo respectively. While the former work tests the performer’s technical abilities to the limits, with its double stoppings, percussive effects and rhythmic irregularity, the latter is necessarily of a more lyrical nature although it is couched in a most contemporary idiom. Pierre Henri showed his mastery both technically and musically in his solo, while Vincent delighted the audience with the explicit clarity of the runs, evenness of tone and intelligent reading of the score. Both these works were given their Malta premiere during the evening, having been performed in many cities all over France over the past year.

Two charming Beethoven works showed the master in a mood that one does not normally acquaint him with: playful and light-hearted. The first work was a Duo for Viola and Violoncello, which develops into a reasonably lengthy dialogue between the two instruments: teasing, playful and jocular throughout, never for a moment becoming aggressive or serious-minded. The Adagio in C Minor has a most beautiful and sweet melody shared between the mandolin and the violoncello, the latter producing a most mellow tone when it had melodic supremacy.

Lutoslawski’s Bucolic Duo for Viola and Violoncello once again brought Pierre Henri and Hélène together for a piece that experiments with rhythms and harmonies. Ravel’s Pavane de la belle au bois dormant for Trio fully manifested once again the maturity of the performers in bringing out the instrumental colour that Ravel is so famous for. A short, lively encore was given after a most enthusiastic applause by an appreciative audience. 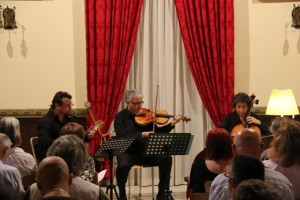 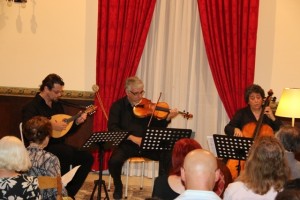 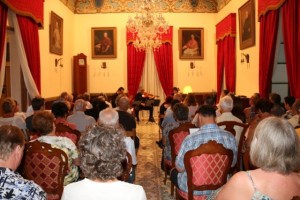 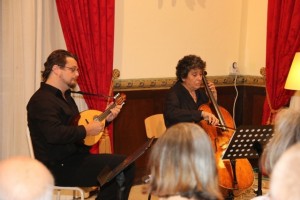