It was to say the least, incredible when with the final roar of applause still ringing in my ears I found out that German-based Syrian cellist Athim Hamdan and pianist Francis James Camilleri had only two days’ rehearsal time for their recital at the Aula Mgr. G. Farrugia.

The evening’s recital there has to be considered as one of the Festival’s highlights. There was this great partnership which worked very well. Maturity blended and perfectly balanced with youthful zest. This younger half-tempered with admirable control, restraint where it was called for, clarity, musicality, assertiveness, concentrated and possessing a beautiful tone. All from a 22-year old youngster from Gozo who is on the threshold of a promising career. To wit he is an adept hand too at writing erudite programme notes, worthy of his aunt Dr. Maria Frendo. He will go far.

Athil Hamdan is a superb cellist whose warm smooth tone gets to one’s heart. He shows he is equally comfortable with music from his country and region as he is with some undisputed great Western Masters including two of the three great Bs: Bach and Brahms. In fact the recital began with the Prelude from the Suite for solo Cello n.2 In D minor BWV, 1008. It was an ideal opening piece, with all necessary nuances very well-projected. The next two pieces, also for solo cello delved into a different sound world, that of the Levant with contemporary composer N. Elruheibany’s Nostalgia. This overall haunting work almost tapped the whole range of the instrument with a sense of pain and anguished soul-searching.

An even younger composer, S. Alhamwy (b.1982) wrote the very evocative Jasmin for Athil Hamdan. Like the previous piece it went down very well with its exotic aura. The duo collaboration began with the serene, well-phrased and quite enchanting Arioso for Cello and Piano from Cantata BWV 156. In Syrian composer Dia Succari’s Image d’Antiquité there was no lack of drama and a very interesting rhythmic juggling about of the two instruments.That was a pretty big morsel the duo dealt with.

Likewise they fared excellently in the even more meaty Brahms Sonata n. 1 in E minor, Op. 38. A glorious experience I must say it was, the balanced partnership at a peak, of experienced maturity and youthful, highly accomplished talent delivering the goods. Piazzolla’s lovely Ave Maria provided a moving interlude followed by Joseph Vella’s Elegy Op. 66. The duo’s playing reminded one just how very beautiful this work is. Serene but not with any compulsory hint of forced resignation in a fine dialogue leading to “…triumph over grief… a celebration of life”.

Armenian composer Alexander Arutunian had the last word with his vibrantly exciting and exotic virtuoso showpiece Impromptu for Cello and Piano. Sheer colour, some warm lyricism and and lots of dazzle. Bravissimi!! 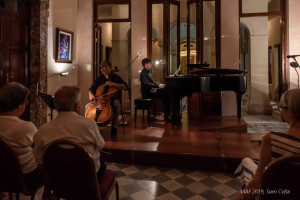 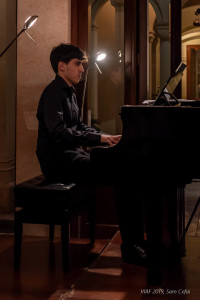 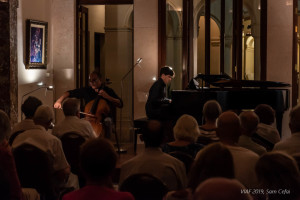 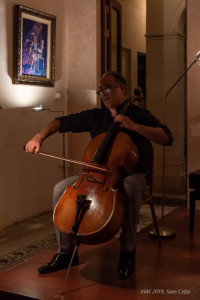