This year’s special 15th edition of VIAF opened with a bang, and what a resounding sound it was! The Malta Philharmonic Orchestra under the direction of VIAF’s Artistic Director, Joseph Vella, played with aplomb and enthusiasm to a packed Saint George’s Basilica right in the heart of the town. The concert opened with Fauré’s gorgeous Pavane. Fauré’s music is a place where opposites are reconciled. The composer’s harmonic, melodic, and metrical techniques work together to create passages of floating multivalence, which throw the listener into a very Fauréan state of uncertainty that is almost Cartesian. Fauré’s inimitable style, replete with the vaunted French qualities of refinement and supreme elegance, is evident in his Pavane, a work that obtains its rhythm from the slow processional Spanish court dance of the same name. It was composed in 1887 and it appeared in two versions, namely, one purely orchestral and the other a secular choral setting of words by Comte Robert de Montesquiou, the poet whose luxurious habits and grotesque mannerisms are said to have directly inspired the creation of characters such as des Esseintes in Huysman’s A Rebours and others by Proust. Pavane ebbs and flows from a series of harmonic and melodic climaxes, conjuring a wonderfully-haunting belle époque elegance. This piece set a mood of tranquillity and sheer enjoyment, which became the hallmark of the evening.

There is an honesty, a sincerity, and an integrity about Vella’s work that endows it with a permanent validity. This is most manifest in his ravishing Agnus Dei, which is part of his Missa Brevis op.40 composed specifically for the female section of Laudate Pueri Choir. As an SSAA choir, the Laudate Pueri is the only choir of its kind on the Maltese islands. Missa Brevis was first sung on Christmas Day 1984 and after 28 years, Maria Frendo’s voice (soloist in Agnus Dei) seems to have lost little, if any, of its clarity, flexibility and unique timbre. This work was followed by Giuseppe Caruana’s best-loved evening hymn Riesaq il-lejl, Mulejja. Caruana’s hymns, most of which are set to the words of Dun Karm Psaila, Malta’s national poet, are renowned for their beautiful melodic lines and starkly simple harmonic progressions. Arguably, Riesaq il-lejl, Mulejja, is one of Caruana’s best-loved in the canon. Characterised by a wonderful melody, long-drawn out phrases and an underlying harmonic texture, the hymn has been arranged by Joseph Vella for the Laudate Pueri’ s all-female choir (SSAA) section. Together with ten other hymns set to the words of Dun Karm Psaila, this work was recorded last year by the Laudate Pueri Choir in a CD commissioned by the Hon. Prime Minister, Dr Lawrence Gonzi. The choir’s quality was throughout typified by a crystal-clear texture, homogeneity and beauty of sound.

These two ‘a cappella’ works were followed by Vella’s formidable Concerto for Violin and Orchestra op.65. Dated 22 September 1993, the idea of writing a concerto for violin had been simmering in the composer’s mind for quite some time. The final shove came in July 1993, when Vella and Marcello Canci, the Italian violin virtuoso, met personally for the first time. Canci was already familiar with Vella’s works and he invited the composer to write a large work for him. The result is this Concerto, which was sketched, composed, and orchestrated during the first three weeks of September 1993. It has received numerous performances, most notably at the Auditorium of the Accademia di Santa Cecilia, Rome. To date, Vella has composed no fewer than nine concertos (2 each for pianoforte and violoncello, and 1 each for violin, flute, clarinet, bassoon, and piccolo.) Characteristic of his more mature art, Vella lends this Concerto a syntactic density and homogeneity that demands singular attention to its sonorous content. The harmonic language is largely atonal, but it could be said to have the note D as a point of both focus and reference. For its drive, the music relies on its rhythmic impetus and florid writing. It is, perhaps, in the second movement that Vella’s lyricism is given space to express itself. Vella is the master of the slow second movement. He has perfected the style and one could say that it is here that his genius is most manifest. Throughout this ravishing, slow, second movement, the lovely theme repeatedly makes its appearance either as an easily decipherable statement or, more often than not, shrouded in the instrumental milieu where it rears its head either coyly or forcefully. This repetition, more than an actual melodic strain, comes across as an acoustic idea. It can be understood as an acoustic trace of the transposition between different levels of musical discourse.

Marcello Canci displayed great control over every dynamic nuance and obvious technical difficulty that the Concerto demands. Performing on his ‘Pietro Guarneri, Mantova 1701’ violin, Canci projected the robust sound of his instrument over a large orchestra and the quality of the sound was just exquisite, particularly in the slow movement. The audience were left spellbound by the dazzling performance and, despite the atonal language of the work, one could hear the proverbial pin drop – such was the awesome atmosphere that this work created. A merited long applause attested to the warm reception that the major work of the evening garnered.

The evening came to a dramatic and effective close with a performance of Franz Liszt’s best-known tone poem, namely, Les Préludes. Despite the suggestion of its title, Les Préludes is by itself a complete, freestanding work. Liszt derives the title from an Ode by French poet Alphonse de Lamartine, Méditations poetiques, which describes the life of man from youthful love through the harsh realities of work and war and finally to self-acceptance and self-knowledge. An excerpt from the poem accompanies Liszt’s score: “What else is our life than a series of preludes to an unknown song, whose first and solemn notes are intoned by death?”

There is something irresistible about Liszt. His fiery passion, devastating charm and demonic virtuosity characterises the late Romantic period. He represents a synthesis of the Age, a sometimes uneasy co-existence between tempest and calm, darkness and light, war and peace. At the end of the concert, the audience burst into a thunderous applause that went on for long minutes. It was indeed a fitting tribute to a massive effort on the part of the organisers to introduce this year’s edition with a difference! And what a difference that has proved to be! Long may it last!! 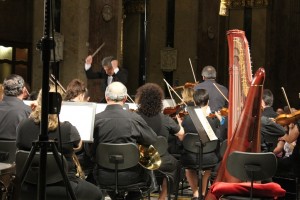 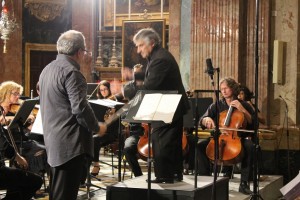 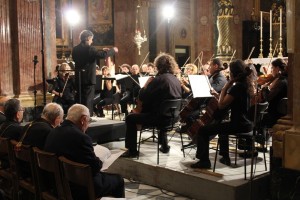 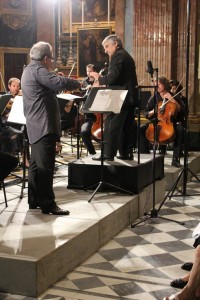 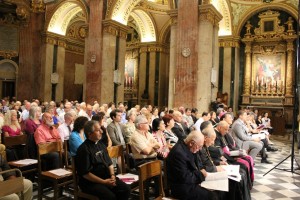