Certainly not a concert to be missed!

Jaso Sasaki started playing the Violin at the very young age of 4, being enrolled at the famous Sibelius Academy, Helsinki, under the tuition of Zoja Istomina and Igor Bezrodnyi.  He subsequently furthered his studies in London, namely, at the Guildhall School of Music and Drama with Yfrah Neaman and Jack Glickman.  He is a prize winner of numerous international competitions.  Apart from a highly successful career as a soloist, Jaso is also an avid chamber music player and he has performed in this capacity all over Europe, the Middle East, and in the United States.  He was a member of the Hallé Orchestra from 2004 to 2009, and in 2012 he graduated Doctor of Music.  An added interest is cuisine!  In fact, Jaso is also a professional restaurant chef.  The phrase “If music be the food of love, play on” never sounded more apt!!

Sini Maaria Virtanen commenced her Violin studies at the age of five at the Käpylä Music Institute, Helsinki, under the tuition of Marja Olamaa, furthering her studies at the Sibelius Academy with Päivyt Meller.  More postgraduate studies led to the achievement of a doctoral degree from the Eastman School of Music.  Sini is the recipient of numerous prizes in both national and international Competitions and since 2009 she has teamed up with pianist Eun MI Ko with whom she has launched a series of concerts, Music after 1900.  Performances have taken the Duo to major venues, most notably the Weill Recital Hall at the prestigious Carnegie.  Currently, Sini is a member of the Status Ensemble, Strings and Hammers, and Trio Ramifications, and also works as a substitute violinist with the Finnish National Opera and the Finnish Radio Symphony Orchestra.

Barbora Hilpo started her Viola studies under the tuition of Prof. J Motlík, subsequently furthering her musical education at the Academy of Performing Arts, Prague, with Prof. Jan Pĕuška.  In 2004 she was chosen to study at the Toho Gakuen, Japan, working with members of the famed Alban Berg Quartet.  Two years later she won a scholarship to perfect her technique at the Guildhall School of Music and Drama, London.  She finished her studies at the Escuela Superior de Música Reina Sofía, Madrid.  She has performed extensively all over Europe and Japan, and has participated in numerous festivals and competitions in Europe.  She is the recipient of the first prize in the Concurso de jovenes interpretes ‘Cuitat de Xativa’, Valencia.  Together with her brother Šimon, she is the co-founder of the Snítil Quartet, which is the Czech Republic’s youngest professional quartet.  Recently, Barbora was also awarded the special prize for the best interpretation of the contemporary Quartet no. 2 by Viktor Kalabis.

Iida-Vilhelmiina Laine commenced her musical studies at the prestigious Turku Conservatory, furthering more advanced studies in Violoncello at the Turku Arts Academy, and the Sibelius Academy, Helsinki, where she was a pupil of Arto Noras.  Chamber music is her passion, but she is equally an accomplished soloist in her own right.  Solo performances have seen her playing with the Lapland Chamber Orchestra, and the Lappeenranta Municipal Orchestra.  As a keen chamber music performer, she has specialised in the genre, attending and participating in master classes with the legendary Alban Berg Quartet.

Marko Hilpo studied the Pianoforte at the Sibelius Academy, Helsinki, and pursued postgraduate studies at the Escuela Superior de Música Reina Sofia, Madrid, with Claudio Martinez Mehner and Prof. Dmitri Bashkirov.  He has also participated in master classes with Lisa Phojola, Emmanuel Krasovsky, and Andras Schiff, amongst others.  He has performed extensively as soloist and in chamber ensembles, apart from proving to be a formidable accompanist, all over Europe and the U.S.A., (Carnegie Hall).  Marko has also performed with the Finnish Radio Symphony Orchestra and the Kuopio AMKO-Symphony, and has been asked to give premiere performances of several works by contemporary composers.  He has made recordings for Finnish National Radio and is heavily involved performing in Summer Festivals in Finland.  In 2008, Marko was awarded the Alumno mas sobresaliente prize given to the best student in the year from the Departments of Pianoforte and Chamber Music at the Escuela Superior de Música Reina Sofia, Madrid. 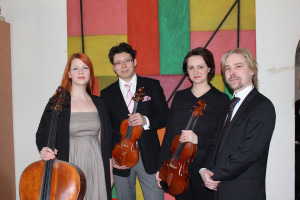