The saxophone quartet Aqua d’Or hail from Norway.  In fact, they are this year’s winners of the prestigious national competition for youths of their native country. What is especially unique about the group is that the eldest is just 15 years of age, and the youngest only 13 years old. They have a whole future ahead of them, and the accomplished manner in which they performed displayed a maturity well beyond their tender years. They are very musical, extremely disciplined, and intelligent performers. The programme they presented attested to both their diversity and versatility.

The quartet featured the whole saxophone family, from the soprano to the baritone. The two girls played the soprano and the alto saxophones, while the two boys performed on the tenor and baritone. Together, the sound was extremely well-balanced throughout, and the different tones blended with ease. The programme started with Gershwin’s ‘Summertime’, a wonderful, beautiful song that never ceases to move listeners. Performed on the soprano saxophone, the plaintive, haunting melody came out in all its wonder, and the semi-jazzy accompaniment was so well adapted for saxophones!

Next came Singelee’s two-movement Quartet no. 1 op. 53. The Adagio sostenuto, is a very beautiful, romantic piece, and was announced by the alto saxophone, which was echoed by the soprano, while the baritone and bass supported with seductive and quiet harmonies.  This was a very calm movement, written in the traditional harmonies with very little harmonic and rhythmic daring, if any.  It came across as soothing, tranquil, and peaceful, bringing out the most mellow tones from the quartet of saxophones.  The next movement is an Allegro vivace.  This is a very short movement, in the form of a Scherzo in mood and colour.  It is built on rippling, cascading triplets at the beginning.  The melodic interest was shared among the four saxophones.  Technically this was a very demanding movement that required a sense of co-ordination and cohesion for its success, something that the ensemble had no difficulty whatsoever to cope with.

Ole Bull’s I ensomme stunde (‘Lonely moments’) is a very well-known melody written for solo violin accompanied with soft chords on the pianoforte.  In the evening’s arrangement, the solo violin was substituted with the soprano saxophone.  This was a most plaintive and nostalgic piece, with the slightly naturally nasal tones of the instrument giving a hint of regret in its tones.  Edvard Grieg’s Solveigs Sang is a gorgeous song that speaks directly to the heart of the listener.  Found in Peer Gynt, this aria has been transcribed for numerous combinations of instruments, and one does not wonder why!  Tackled by the alto saxophone, who possessed a truly noble tone, this song was delivered as the fragile, lyrical utterance it really is, wonderful and sophisticated.

A Swedish folksong, MIn tanke flyr hen (‘My thoughts take flight’) was followed by Valentin Hude’s Idea in Latin.  Both these pieces were extremely well-coordinated and impeccably executed.  The former was rhythmic with an element of salsa in it.  The harmonies are largely traditional, while the melodic interest was largely shared by the soprano and alto saxophones.  It is dance music, warm in texture and happy in mood.  In the latter piece, a contrast was established because this was a much quieter work, romantic and sultry in tone and mood.  It had a lilting quality to it and one could almost trace a story-line along the contours of the music.

Piazzolla’s name is unequivocally acquainted with Argentinian tango.  In fact, Oblivion came next.  The alto saxophone, with its seductive tones, entered immediately over a subtle, arpeggiated accompaniment (almost Glass-like in its simplicity) with a melody of extreme melancholy; long-held notes alternating with slowly falling and weaving figures.  A middle section offered a minimally contrasting theme, lush but less intense.  This is one of Piazzolla’s most traditional tangos, less jazzy and Bartókian than his other widely circulated compositions, yet it also has a harmonic sophistication and whispered sadness owing much to Antonio Carlos Jobim.  Played on the saxophones, the sad, nostalgic quality of the piece was beautifully brought out.

Another tango, this time the very well-known La cumparsita by Rodriguez gave a distinctly different style to the genre.  This was extremely sensuous and seductive in tone and colour, while Whitlock’s ‘Love Song’ from his Celtic Suite was a wonderful piece that was both romantic yet with a harmonic edge to it that gave it a quirky tone.  It was dreamy and ethereal, with a majestic middle section.  The dynamic contrast was extended into the following piece, namely, Smith’s Semper Inebriate.  This started with very contemporary harmonies, and subsequently developed into a humorous piece, with the bass saxophone providing the rhythmic punch.  It was witty and funny, as if the music itself was inebriated and could quite find its footing, either rhythmically and melodically with even a hint of the American National Anthem thrown in for good measure!

A Mexican folk tune, Veracruz, had an ‘ad libitum’ feel to it which, while giving some free rein to the musicians, also risks the music running amok.  It was truly remarkable that in the more improvisatory moments of the piece, the ensemble remained controlled and disciplined.  The final piece on the programme was Markussen’s three-movement Street Dance.  This lovely piece has been arranged for a wide variety of instruments and chamber formations, not least for saxophone quartet.  Funky is a lively movement with displaced rhythms and a definite dance quality to it.  Ballade is a rolling piece of long drawn-out phrases, with the melodic interest resting largely on the soprano saxophone.  Harmonies sounded avant-garde and quaint and the piece had an intense quality to it that asked for a wide dynamic range.  Rappsortie was again a fast outer movement that scaled the whole gamut of the instruments’ tonal range.

A resounding applause from a packed Ministry Hall greeted the final chord, which was well-merited.  A most entertaining concert that once again consolidated the rapport that VIAF has with performers from the National Competition for Youths in Norway.  In fact, this was the twelfth time that Norway has sent excellent winners to participate in our Festival, and the organisers look forward to further collaboration between the two countries! 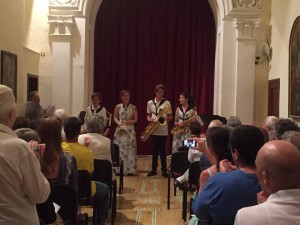 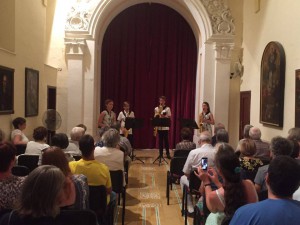 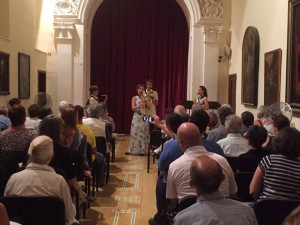 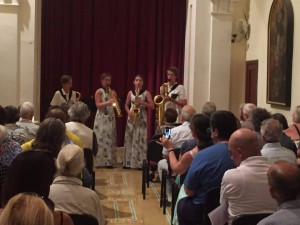