Pierre Henri Xuereb graduated with full honours from the Conservatoire de Musique d’Avignon and won first prize from the Paris Conservatoire in the Viola class of the famous Serge Collot at the age of sixteen.  He perfected his studies at the legendary Juilliard School, New York, followed by a postgraduate course at Boston University.  Auditioning for Pierre Boulez in New York, he joined the Ensemble Intercontemporain as a soloist for two years.  He has collaborated with many prestigious ensembles and orchestras, namely, Audubon, Tchaikovsky Trio, Rosamonde Quartet, and Talich Quartet, and the Tel Aviv Symphony Orchestra, amongst others.  He has also performed in various Festivals, appearing alongside Pascal Devoyon, Natalia Gutman, Jean-François Heisler, Vladimir Mendelssohn, and others.  Pierre Henri has recorded numerous CDs for the labels Timpani, Harmonia Mundi, and Deutsche Grammophon, and he also teaches master classes in music festivals worldwide.  He works closely with the famous Martinů Quartet, with whom he performs in complex chamber formations.  He is currently Professor of Viola at the prestigious Paris Conservatoire, and at the Ecole Nationale de Musique de Gennevilliers.

Ruixin Niu commenced her violin studies at the age of four, becoming the leader of the Nanjing Youth Symphony Orchestra when she was a middle school student.  She furthered her studies at University, graduating with full honours.  Switching to viola five years ago she passed all her examinations with distinction from the Central Conservatory of Music, Beijing.  Her performances have been highly acclaimed by world-class violists such as Tabea Zimmermann, Martin Outram, Nokuthula Ngwenyama, Bruno Pasquier, and others.  She pursued advanced viola studies in Geneva and is in demand for performances in both Europe and Asia.  A virtuoso soloist in her own right she is equally adept at chamber music performance. As a member of the Primrose Ensemble she has a very busy schedule ahead, with both concerts and recordings.

Thibaud Verbe is the recipient of numerous prizes and performs both as a soloist and in chamber ensembles in his native France and beyond. He is much in demand for master classes and as a member of the Unis Vers Quartet and as a soloist with the Pari Musical Orchestra his performances have earned him glowing critical acclaim. His unique and eclectic musicianship allows him to interact with other disciplines, most notably cinema. He has performed with world-class musicians such as Emmanuelle Bertrand, Christophe Giovaninetti, Pierre Henri Xuereb, Lluis Claret, Liz Kerob, and Jeff Thayer. Apart from his career as a cellist, Thibaud is also in demand as a conductor and in this capacity he participates regularly in major Festivals. He teaches the violoncello and chamber music at the CRD d’Argenteuil. 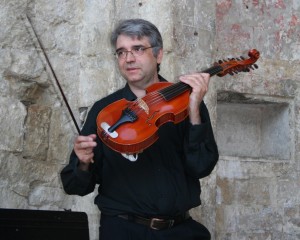