New Music Delaware is a Faculty Concert Series at the University of Delaware dedicated to the performance and promotion of new music. During its more than seventy-five years of history, it has brought international composers to campus for residencies and concerts of their music. For this concert, New Music Delaware will present compositions from four composers currently based in America: Ofer Ben-Amots, Daniel Dorff, Xiang Gao and Jennifer Margaret Barker. Three guest artists will feature in this concert: pianists, Anne-Marie McDermott and Francesca Hurst, and the erhu-violin UD Ensemble-in-Residence, 6-WIRE. In addition this concert will feature Samantha Gao, the 15-year old daughter of UD Professor of Violin, Xiang Gao. With performers and composers from around the globe, this concert will present a variety of international musical flavours including elements of jazz.

Montage Music was written in memory of Santa Fe artist, Bebe Krimmer, and was inspired by several of her artworks as well as by her radiant and charismatic personality. The work opens and closes with the musical portrayal of  Bebe’s name through a constant pendulum between the notes B-E-B-E. When the commissioner of the work mentioned Bebe’s great fondness for jazz, I decided to write the third movement in the old-time Dixie jazz style. The movement opens with a slow and mournful New Orleans funeral march, but then quickly moves into a faster bluesy mode and ends with a cheerful Second-line dance.

Sixth Sense was composed in memory of the victims of the Sandy Hook Elementary School shooting (Newtown, CT) on December 14, 2012. As a father of a Primary 1 student at the time, the tragedy of this event shook every fiber of my being and forced me to compose during the sleepless nights following the event. The singing quality of the erhu (Chinese two-stringed violin) is considered as powerful as the human voice, which fits well in this forlorn and emotional piece. The western strings imitate that quality throughout the piece, as well. The solo cello starts the composition in the style of Shaanxi province folk songs, setting the scene of the cold dark morning of December 14, 2012. The piano entrance rings the clock tower bells nine times. The composition develops with a Chinese pentatonic harmonic structure, which resembles the emptiness and guilt our hearts felt as citizens after the tragedy. The rock rhythm in the piano during the dark dancing section adds a layer of anger to this musical memorial event. Chinese music is known to be very programmatic, thus, the composition ends with non-vibrated long tones from the strings of the two worlds, sliding to remind us of the sirens near the crime scene from that day. Coupled with the two broken children’s songs from China and the U.S. lightly played by the piano, the music seeks to freeze time, for just a moment.

In 2002, I began to think about classical saxophone playing again, having started musical life as a saxophonist before putting more time into composing and bass clarinet. In fact, I started composing in high school only to create saxophone repertoire to play myself, and then got sidetracked. I kept missing saxophone more and more through 2002 and 2003 and thought about tenor saxophone as being my “real” voice even though I’d always been an alto player. In July 2003 I went to the World Saxophone Congress in Minneapolis – the first time in 25 years that I’d immersed myself back into the saxophone world. I got impulsive and bought a tenor there and started to practice every day, just like in college; and I knew it was time to start writing for saxophone again. At the time, I was learning about the body’s neural nodes (sometimes called chakras), which are seven locations in the body serving as primary junctions in our nervous system. In holistic disciplines like yoga and reiki, each chakra is believed to regulate aspects of our spiritual and psychological energy, and this inspired me to write a suite about chakras, with each chakra’s personality suggesting the mood and flow of the music’s seven continuous connected movements.

In discussing this commission with Xiang Gao, I came to realize that he was looking for a work which addressed the concept and belief that we are caretakers of this planet for the next generations. The original idea was to focus the work on whales due to their amazing ‘singing’. I was very excited about this idea since my own composition professor, George Crumb, wrote one of the most iconic compositions, titled Vox Balanae, inspired by the singing of whales. For this composition, I took that idea a step further and decided to not only imitate the sound of whales through musical instruments but incorporate recordings of whale song into the soundscape. In researching the subject matter, I also became excited about the idea of including Sammi Gao, Xiang’s daughter, as a second violinist when I discovered audio of whales communicating with their offspring. Adding our University of Delaware wind faculty was an added bonus both musically and visually, and adding soprano, Noel Archambeault, allowed me the opportunity to create a short ‘vocalise’ for a mythological Siren. It took some time to settle on the title of the work. Due to the close connection of indigenous peoples to nature, I wanted to use an Inuit term for the title of the work. In the end, however, I became more drawn to the Maori term, Kaitiaki, which means ‘guardian’ and is a word that the Maori people use to describe their newborn children. They call them ‘guardians’ of the land and the peoples, which aptly aligns with our theme for the work.

The guest artist performances by 6-WIRE and Anne-Marie McDermott were supported by the University of Delaware Master Players Concert Series. 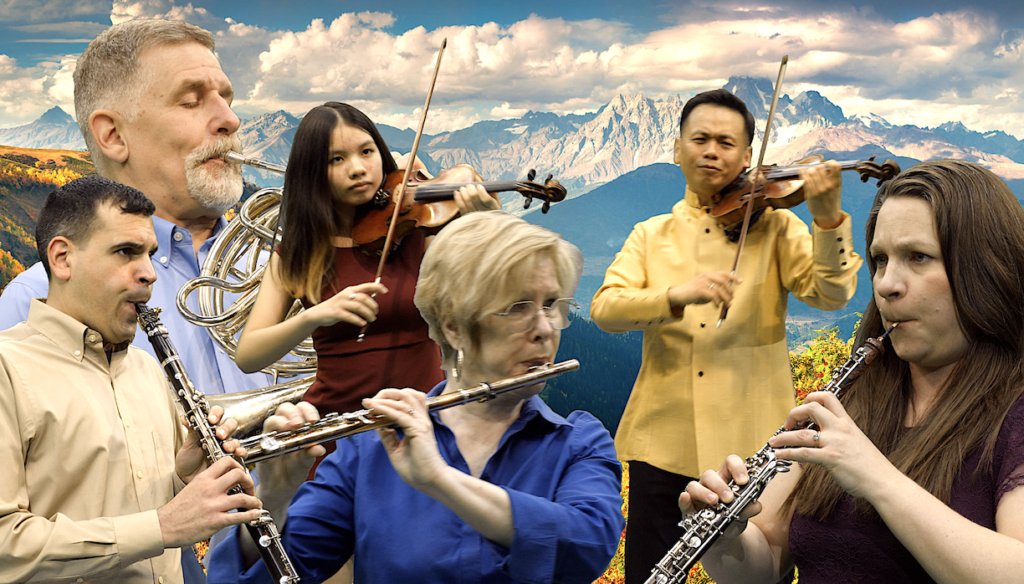