Award-winning Baroque ensemble, Le Jardin Musical, comprising of soprano Monique Zanetti, violinists Christine Antoine and Myriam Cambreling, double bassist Oliver Destéphany, and harpsichordist Pierre Perdigon will perform a selection of works by Lambert, Leclair, Corelli, Monteverdi, and more on Monday 20 December. Le Jardin Musical is one of the foremost Baroque ensembles in Europe.  Prior to coming together in the current ensemble, all musicians formed part of high-profile Baroque formations, most notably, Ad Fontès, Orchestre des Pays de Savoie, Swiss Consort, Ensemble Baroque de Nice, Les Musiciens du Louvre, and more.  It was on the initiative of its leader, Christine Antoine, that these wonderful musicians came together to form Le Jardin Musical, enabling the performers to act as soloists in their own right apart from contributing to the glorious polyphonic fabric of Baroque music as an ensemble.  Le Jardin Musical seeks to capture the nuance and subtlety of the different Baroque texture that is the hallmark of the countries whose composers are represented in any one concert.  The musicians seek to further capture the aura of the Baroque temperament by performing on period instruments.

BrassTubes is a stupendous ensemble made up of professionals of their respective instrument. It is under the direction of Mark Gauci, a top class musician in his own right. Joining them for their concert will be well-known local soprano Antonella Rapa who will be accompanied by Amy Rapa. This concert will take place on Tuesday 21 December.

Both concerts will be held at St George’s Basilica, 8pm. Those interested are kindly asked to reserve a seat by writing to [email protected]

The organisers of VIAF would like to thank Arts Council Malta for their continued support of our project. Watch this space for details of our 25th anniversary programme, held in honour of VIAF’s co-founder and first Artistic Director, Mro Joseph Vella, unfolding in 2022. It’s a special one!

We take the opportunity to thank our esteemed sponsors and patrons and to wish you all blessings for the Christmas season. 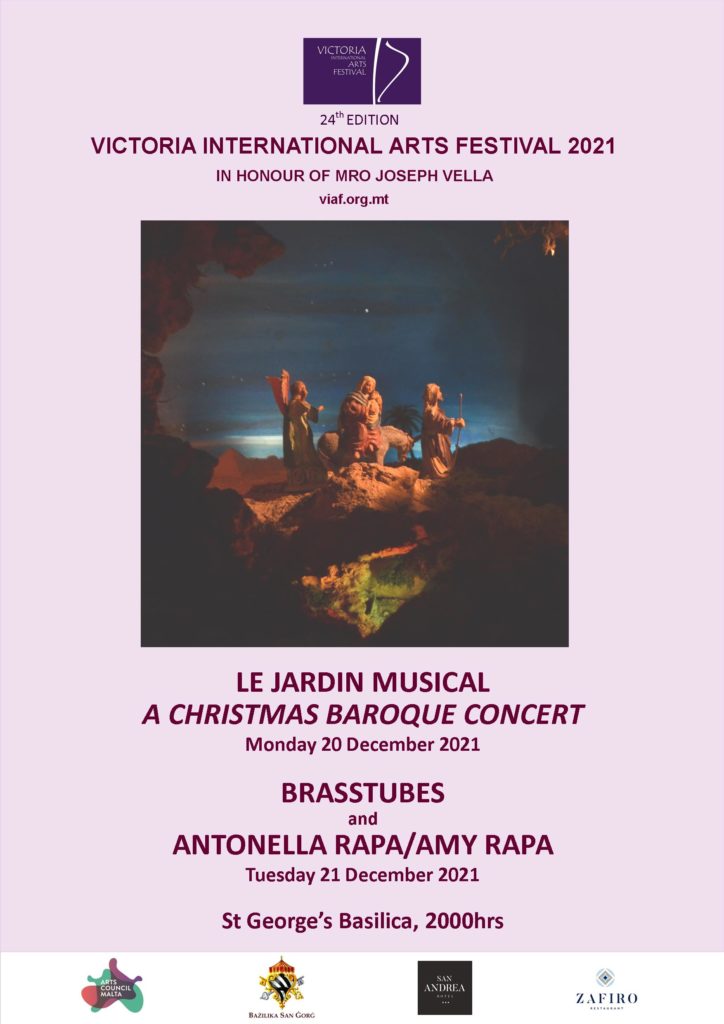