EMCY, the European Music Competition for Youths, sends its yearly prize-winners to perform in the Victoria International Arts Festival. This year it was the turn of Flute East Trio, a group of three young ladies who hail from South Korea and Taiwan. Extremely talented and polished, all three of them are studying in Berlin, making a name for themselves both as solo performers and in orchestras. Together they formed the Flute East Trio and on Saturday 17 June at the Cittadella Centre for the Arts.  A packed hall was regaled with a programme of works ranging from Kuhlau to Quantz, on to Casterede, Pécou, and Bocquillon.

Flute en vacances by Casterède came first, a charming piece consisting of four mood pieces, as it were, which set the right tone for the concert. Immediately it was patently evident that these three young ladies, Hannah Park, Sojeong Son, Yu-Cheng Hsu, are mature beyond their young ages (late teens), possessing a formidable technique and an evenness of tone throughout the whole tonal range.

The first movement was Flûtes Pastorales, which, as the title indicates, gave an impression of rural life.  Casterède’s use of ‘natural’ intervals, which are often found in folk music, conjured up images of bucolic scenes, and the flowing main melody added to this picture. The second movement, Flûtes Joyeuses, was a light and sparkling scherzo with a seductive, almost Spanish, dance in the middle.  The third movement, Flûtes Reveuses, is based on a theme taken from Casterède’s flute study book, Douze Etudes, published in 1961.  This movement’s languid modal melody and slowly unfurling harmony created a calm, whimsical mood which gradually melted away into stillness.  The finale, Flûtes Legeres, is a fast, jazzy movement with a light, almost elastic melody.  The flutes flew around this tune, always changing something and taking the listener by surprise.  After a brief waltzy interlude the main themes returned and the work ended with a typically French flick of the wrist.

Next came Friedrich Kuhlau’s Trio no. 1 in E Minor op. 86.  The Trio had no problem at all adjusting to a completely different style, from a modern to a Romantic one. The opening Allegro follows on the style of Beethoven in the latter’s earlier chamber works.  Manifesting a partiality for keen counterpoint, the three instruments engaged in an equitable exchange that was characterised by classic poise.  Generally the first flute had the melodic interest with the second flute often accompanying in thirds while the third flute provided the harmonic basis.  The Scherzo and Trio sauntered along in triplet figurations exhibiting the virtuosity of the players with the Trio providing a more sedate rhythmic pattern.  The Larghetto brought out the singing quality one invariably associates with the flute.  The final Rondo kept the players busy with cascading notes, an engaging dynamic range, and a display of virtuosity, all couched in a supremely refined and elegant idiom.

Thierry Pécou is a contemporary French composer.  His style is extremely minimalist and spare.  Yet, despite the apparent austerity, in performance his works are attractive and appealing.  The first part of Pour un rituel imaginaire was rhythmic and almost percussive in texture, while the second part saw a change in mood completely, sounding like an antique aria in the style of an incantation.  Particularly interesting was the acoustic technique that the flutists implemented gracefully for a successful rendition of the work.

Johann Quantz’s Sonata in D Major op. 116 came next; a typical late Baroque work in the style of a Suite.  Opening in a lively Vivace, the three flutes engaged in a very short movement characterised by swift rhythms and charming exchanges between the three instruments.  A haunting Largo followed, composed largely in homophonic style, developing in the manner of a chorale one associates with the age.  This movement moved on clear, articulate lines, lacking the dense networking of counterpoint.  In contrast, the third movement was a Minuet in the usual triple meter that depended largely for its effect on the typical Baroque echo-effect, the forte piano style that fully adhered to the doctrine of the emotions prevalent in the age.  An elegant dance form, this movement developed on elegant poise and a strict sense of tempo.  The next movement was a Rigaudon, another dance form in duple meter this time, typically found in a Baroque Suite.  The rhythm was simple and phrasing was largely straightforward.  The last movement was another Vivace, a highly contrapuntal piece that fully exploited not only the tonal and dynamic range of the instrument, but also the voice-leading and virtuosity of the players.  It was a very difficult piece, both technically and musically, and Flute East Trio performed it with elegance and assurance.

Boucquillon’s Territoires is an extremely avant garde work that explores all the technical prowess of the flutists.  This was the last piece on a most eclectic programme.  While no melodic line could be discerned, the three flutes engaged in a surreal conversation that imitated birdsong.  Structured on what one could compare to a ground bass on one of the flutes while the other two played notes at a distance of a semitone from one another, at the end the three flutes converged in a frenzy of flutter to bring this piece to a close.

Such a young, accomplished Trio could not but impress a truly enthusiastic audience.  A short brilliant encore was given to the delight of all present. 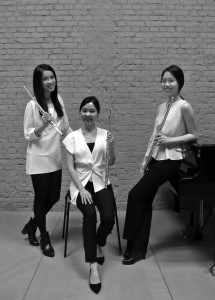