After a week of glorious Baroque music, almost all of it performed in the golden Basilica of St George’s, it was back to the staple chamber music concerts that VIAF has established as its benchmark.  In fact, this year the Festival is offering close on 30 such concerts, with ensembles in every conceivable formation including a double bass trio right at the end of the Festival.

Joze Kotar is one of Europe’s top clarinettists, whose dazzling performances is only one of his characteristics.  His technique is coupled by a sound musicianship that, as we say, makes all the difference.  In this, he is more than ably supported by pianist Luca Ferrini, a performer of a quiet disposition that belies his formidable technique and equally powerful musicality.  The programme was devised with intelligence and perception — it basically consisted of Argentinian music with a few works by Joseph Vella thrown in halfway through the concert.

The concert started with Guastavino’s Sonata for clarinet and pianoforte.  A prominent representative of twentieth century Argentine music, Carlos Guastavino is recognized for his unique melodic gift and characteristic charm.  An extremely lush texture was immediately woven by both clarinet and pianoforte in the first movement of marked Allegro deciso.  While it was undeniably romantic in tone, yet the composer uses harmonic structures that are reminiscent of the great Paul Hindemith who also wrote a Sonata for Clarinet and Pianoforte.  In this movement, the two instruments shared the melodic spoils equitably, and the breadth and depth of the piano were equally matched with those of the clarinet.  The second movement is an Andante.  It is a wondrous five minutes of gorgeous music.  The tonal and dynamic range of the clarinet was fully exploited here, particularly that of the seductive lower register, which in Kotar’s handling was nothing short of ravishing.  The piano had some lovely expansive melodic lines against rippling notes on the clarinet.  This movement simply sang its heart out.  The final movement is in Rondo form, marked Allegro spiritoso.  It was fast and energetic, rhythmically exciting and technically very demanding on both performers.

Next came four lovely pieces by Joseph Vella, who wrote some gorgeous music for the clarinet, including a full-blown concerto with orchestra.  The first piece was his early work, Passacaglietta op. 9, which Kotar and Ferrini have recorded on CD as part of their series of ‘Island Music’.  Marked Andante sostenuto, the Passacaglietta makes free use of serial techniques with the melodic line of the Clarinet growing out directly from the material first played by the pianoforte. Typical of the composer is the way this serial material is organised to almost hint at tonal roots.  As the title implies, the work follows the passacaglia principle, this again, in a rather loose manner.  The four-bar block announced by the Ferrini on the pianoforte served as the basis for ten variations together with another one for pianoforte solo in the middle, this time extended to six bars.  Right after the latter, the Clarinet playing piano, first picked up the opening pianoforte right-hand figure.  The music then slowly built up towards a climax as each successive variation became more busy and intense.  The initial pianoforte figure also served as the basis for a codetta to round off the piece.  The partnership showed between Ferrini and Kotar was nothing short of exemplary.

Ferrini then showed his mettle as a soloist in his own right, with Invention for Piano Solo op. 15 and 3 Preludes from his op. 70, namely, numbers 2, 4 and 5.  The utterly delectable Invention, a very early Vella work, manifested the composer’s wonderful compositional technique while his Preludes, which have been played all over the world, are miniature gems of gorgeous music-making.  Ferrini did full justice to these works, ably adapting to the different styles that was demanded of him.  The last Vella piece was Segments no. 3 op. 95 for Clarinet and Pianoforte.  A difficult piece for both players, throughout the piece, the semiquaver serves as the basic time unit (9/16, 12/16, 6/16, and 3/16) with a short section towards the middle of the piece in 2/8 and 4/8 time.  This was handled with ease and panache by both performers.

Four shortish pieces followed, very different in style and mood.  The first one was Lerman’s Billinghurst y Juncal; Callao y Corrientes, a piece full of jazzy rhythms and displaced accents.  It once again displayed a full partnership between the two instruments.  The lower sensuous range of the clarinet contrasted markedly with the upper more reedy tones.  Aieta’s Corralera was a work cast in the same mould as Lerman’s, while Piazzolla’s Milonga del Angel came across as openly sentimental and romantic.  The recital ended with the Argentinian tango master’s Allegro tangabile, a hectic and busy piece that reached dizzying heights in the accumulation of both sound and dynamics.  A fitting close indeed! 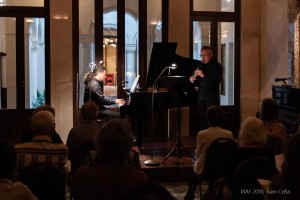 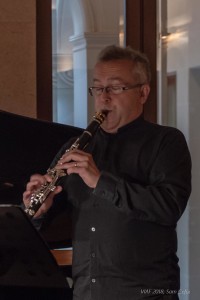 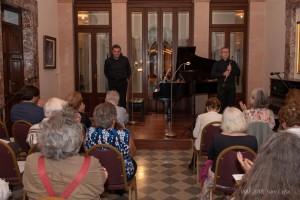 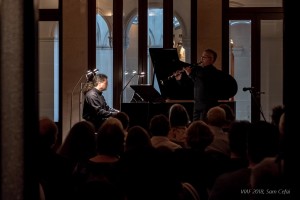