The second in the long and varied series of chamber music concerts consisted of a violoncello and pianoforte recital by Luc Tooten and Stéphane De May respectively.  Playing works ranging from Schumann to Piazzolla, this was one master class in refinement and elegance.

Starting with Schumann’s evergreen Fantasiestücke op. 12 the tone and mood were immediately set through the quiet authority of both performers.  Schumann tends to be retrospective in his chamber works, looking back with typical Romantic nostalgia yet never getting too close to the morbid or fanciful.  There is something inherently classical and sublime about his poise and this was fully brought out in the performance on the evening in question.

Schumann unites the richness of the romanticist poetic imagination with the sensitive reaction of the musician.  He is nervous and responsive, reflective and sensuous, and rich in minute and delightful detail.  He commands all romantic types of music with the exception of the opera, and his pregnant individuality emanates from every sentence.  Dwelling on detail, on the harmonic, melodic, and coloristic refinement, both performers enriched Schumann’s his music immensely.  The stylistic mark of the romantic lyricism inherent in this work was transmitted to the audience as a concentrated expression in the single melody, the delineation of a situation, and the establishment of a mood in a few measures, which was then retained for the duration of the piece.

These three all too short pieces op. 73 showed a progressive increase in animation, but they were also subtly unified, with an important thematic idea from each one appearing in an entirely new context in the next.  The melancholy theme presented at the outset was a double one, with the step-wise descending line of the violoncello punctuated by a more widely spaced phrase from the pianoforte.  It was the piano’s phrase, transformed into the major, which generated the theme of the second piece.  This also had a contrasting middle section largely based on smooth, flowing, chromatic lines.  Following the return of the opening theme, the music eventually sank to a serene close with a distant echo of the middle section.  The lively concluding piece seemed to arise out of the closing bars of the preceding number.  In addition, the second half of its main theme incorporated the step-wise descending phrase from the opening number.  As the pace accelerated for the coda, the pianoforte’s widely spaced motif from the first piece also made a return, to complete the cyclic pattern of the work as a whole.  Stylistically, Schumann’s song-writing skills were fully manifest in this beautiful, endearing work originally set for clarinet and piano.  Very romantic in spirit, the performance of Fantasiestücke was characterised by long, sweeping phrases, syncopated rhythmic patterns, and a wide dynamic/tonal range.  The indication attacca at the end of the first two pieces revealed that the three ternary-shaped miniatures were actually conceived as a continuous suite, changing in mood from the wistful nostalgia of the first in A Minor, to the sunnier blandishments of the second, and the urgent resolve of the third.  The last two, both in A Major, are extended by eloquent codas.

Next on the programme came Chopin’s Sonata in G Minor op. 65, a rare work in the concert repertoire.  This is the composer’s last major work.  Apart from the piano, the cello was the only instrument for which Chopin composed substantial amounts of music; in 1832 he had written the Grand Duo Concertante for the cellist Auguste Franchomme.  In part because of the presence of the cello, and in greater part because of the formal characteristics of the piece, the composition of the Cello Sonata occupied Chopin for an unusually long period.  He worked on it through 1845 and well into 1846, sketching and drafting as he had not done before, and at one point complaining to his sister, “I write a little and cross out a lot.”  Extant sketches show that Chopin did indeed discard an incredible amount of material and redrafted most of his ideas before deciding on the final form of the work.  The piece was printed in Paris in 1847.  Chopin and Franchomme premiered the Sonata in Paris to great acclaim, in what was to be the last performance of Chopin’s career.

Much of Chopin’s anguish stemmed from his difficulties in the shaping the relationship between the two instruments.  That he mostly composed the cello part first was perhaps at the heart of the matter, for Chopin was forced to curb his keyboard tendencies and remove himself from his natural idiom.  It is no surprise that the piano part often sounds uncharacteristic of Chopin.  Furthermore, because he chose to engage himself with the Germanic sonata idea, as he had in his piano sonatas, he had to set aside his predilection for ternary forms with codas and achieve contrast and develop logical structures in new and unfamiliar ways.

Chopin takes great care to distribute the material equally between the cello and piano, and he accomplishes this goal in a variety of ways.  For instance, in the first group of themes in the first movement we could hear passages of piano solo, piano with cello accompaniment, cello with a substantial piano counter-subject, cello with only light piano accompaniment, and counterpoint in which the two partners are equal.  After the second group opened with rounded phrases for each instrument, a three-part invention involving both instruments ensued.  The Germanic aspect of the movement became clear in Chopin’s development of an integrated sonata form from a few related motives.  Inversion and other transformations of motives from the first few measures occurred even in the exposition. One of the cello’s most important motives, a rising and falling half-step, came not from the main theme but from prefatory material, and what seemed like mere connective gestures evolved into parts of themes.  It is not surprising that Chopin moved to the relative major (B flat), but what is striking is his path – a string of dominant-seventh harmonies – towards this goal.  Throughout, Chopin diminishes the punctuating potential of his cadences by writing continuous melody over them, giving a sense of constant growth.

Chopin creates relationships among the four movements of the sonata through melodic references.  The primary cello motive of the first movement, a rising and falling half-step, opened the lush second movement, the folksy Scherzo, and the tarantella finale; further evidence that Chopin was consciously experimenting with German compositional methods.  The clear divisions between cello and piano in the second movement contrasted with the more integrated use of the instruments in the first movement, while the finale sounded, at times, like Mendelssohn.  The end result was a unique performance by Luc Tooten and Stéphane De May.

Gabriel Fauré’s Élégie op. 24 is a work of perennial charm and beauty.  One never tires of listening to it for while it makes strong appeals to the emotions it never becomes sentimentalised.  The simple grandeur of the work’s ABA layout, in which the most telling melody is allowed to sing without complication, no doubt accounts for the Élégie‘s phenomenal appeal.  Over steady, dirge-like chords, Luc Tooten dramatically embarked upon an expansive lament that quietened as it unfolded in tones of sombre oration.  Then, accompanied by the cello, Stéphane  essayed an effusive song, as of joy recollected in grief, taken up by the cello to culminate in a sudden powerful cadenza before the funereal opening returned, shadowed by the central section’s plaint, to sing itself into nothingness.  The interpretation by the performers was characterised by elegance in phrasing, dignity in tone and spirit, and a sound that can only be described as liquid beauty.

The evening’s performance came to a resounding close with Piazzolla’s Le Gran Tango.  This is a single-movement piece for violoncello and pianoforte that expresses the spirit of nuevo tango (“new tango”), a melding of traditional tango rhythms and jazz-inspired syncopation. Written in 1982, Le Grand Tango was published in Paris; thus its French rather than Spanish title.  He composed this work for Russian cellist Mstislav Rostropovich, who did not play it until 1990 or record it until 1996.  Although structured in a single movement, the work has three broad sections.  Luc Tooten opened with an affirmative and authoritative Tempo di tango, in which strongly accented tango rhythms dominated.  In the second section, performers are told to allow more motion, with a ‘libero e cantabile’ (‘free and singing’) spirit.  This contained extensive dialogue between the cello and the piano.  The final section, for which Piazzolla provided the tempo indication ‘giocoso’ (‘playful’), presented a mood of electric energy and even humour.  The music charged forward to its conclusion, giving the cellist many challenging double-stops and glissandos. Throughout there was exuberance, seduction and panache.

This was one truly memorable evening! 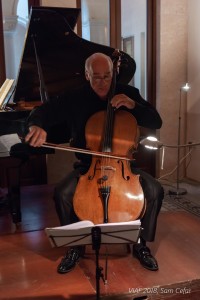 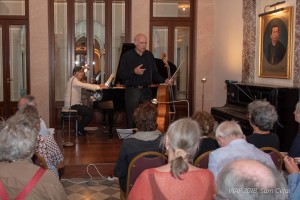 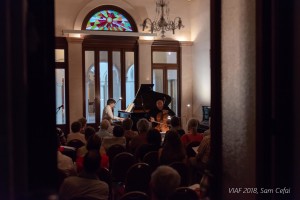 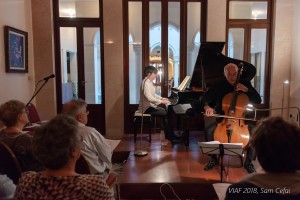 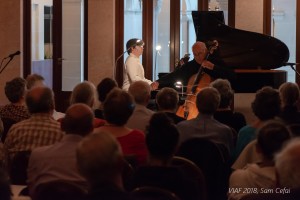 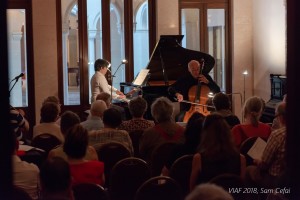