Standards keep rising. A highly professional trio from Paris, comprised of CÉLINE NESSI (Flute), OLIVIER ROUSSET (Oboe) and CHRISTOPHE VELLA (Percussion) who are all leaders in their respective sections with the prestigious Paris Opera, gave a challenging and provocative concert of mainly contemporary works on Thursday at the Aula Mgr G. Farrugia.

Cohesion and finesse marked their playing. From the mind-blowing expertise of Christophe Vella on a whole range of percussion instruments, to the brilliant tones of the Celine Nessi on the flute and agility of Olivier Rousset on the oboe, the programme covered a gamut of styles and forms, to include even a Baroque work in the form of one of CPE Bach’s Trio Sonatas.

Starting with Joseph Vella’s evocative and serene Ħaġar Qim op. 25 (Ballet Music), which was composed in 1978 and premiered on site to the choreography of Tanya Bayona at the wonderful temples in Malta, this work is timeless much as the historic sites are. The pagan atmosphere of the piece was futher highlighted by the use of exotic percussion instruments and by the consistent and insistent emphasis on rhythm. The opening percussion solo set the primeval scene and the clarinet enhanced the pastoral atmosphere that was further accentuated by the appearance of the flute. The anxious rhythm on the bongos introduced the next section, and all three instruments combined in the frenzy swirling of the sacrificial ceremony. When the gods were more or less appeased, the calm pastoral serenity returned and the ballet is rounded off with a joyful thanksgiving dance.

The way Vella composed this work is characterised by a neglect of elements considered constructive in favour of instrumental colouring and harmonic piquancy. The clear articulation of a musical phrase turned into a swinging, undulating repetition, into a sounding mosaic comparable to the lapping of waves or the rustling of leaves kissing the air at sunset. The discrete sections of this work each portrayed a different mood or state, yet Vella is also aware of the unifying whole, for the colouristic-pictorial element dominated even the harmonic structure: the phenomenon of merging tones was superimposed on the principles of tonal-chordal architecture, which again resulted in a changed role for the dissonance, whose use and desirability depend entirely on its value as colour agent. Ħaġar Qim developed into an organised riot of wild colour, passionate, emotional intensity and brilliant harmonic and melodic nuances. A truly wonderful performance by Christophe, Celine and Olivier.

Next came an entirely different work – different in tone, style and colour. This was CPE Bach’s Trio Sonata in A. The strange element in this work was that the continuo part was performed on the vibes by Christophe Vella. While this may come across as an anomaly for some, and that is more than understandable, what it did do was create an entirely different colour and effect. Nothing is more remote from the Baroque than a vibraphone, surely, yet, when a work transcends boundaries it just fits. The playing was at its most elegant and refined, with the wind instruments fully complementing each other either in dialogue or in antiphonal exchanges.

Kraft’s Encounter 11 for oboe and vibraphone was one of the more provocative works of the evening. Scored for Oboe solo and percussion, this made huge demands on the oboist, ones that Olivier more than met with assurance and expertise. The work is one in a series of Encounters by American composer William Kraft. Himself a master percussionist, he fully exploited his profound knowledge of the range and his writing for the oboe both provided a contrast and at times made it sound as another percussive element in the whole fabric of the piece.

Leon Stein’s Introduction and Rondo for flute and percussion is a virtuoso piece for Flute solo and percussion. The idiom of the writing is modernist yet, underlying the rhythmic language of his work there is a tight formal and structural logic that acts as a pivot around which the piece develops. Fully manifesting her technical virtuosity on the flute, Celine Nessi gave a masterful performance, while the percussionist flitted from one instrument to the other with consummate ease.  This highly entertaining concert came to a dramatic close with one of Astor Piazzolla’s Tangos.  It was a dynamic, feverish, exciting, and compelling interpretation and the resounding applause at the end attested to the brilliance of the performance! 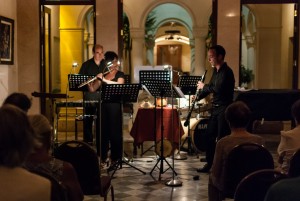 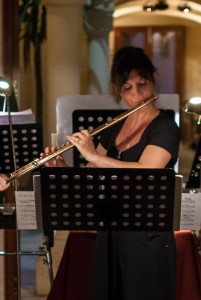 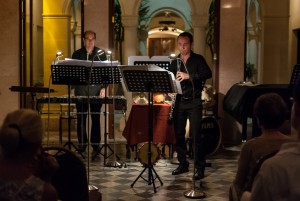