After Gabriele Vianello from Venice, and Young-Choon Park from South Korea, it’s now the turn of David Campignon, originally from Japan but residing in France, who will regale an anticipated full-capacity Aula Mgr G. Farrugia in a solo pianoforte recital with a programme that is certainly not for the faint-hearted. Performing Mozart’s Sonata no. 4 in Eb Major KV282, followed by the entire 4 Ballades of Chopin, and finishing with Schumann’s Davidsbündlerstänze op 6, this programme is nothing short of an extravaganza for those who are partial to a Classical/Romantic repertoire.

Concert starts at 8pm. Piano students, especially, don’t miss out on such a golden opportunity. It won’t get much better, especially in Gozo!!

David Campignon was born in Hayama, Japan. He was initially educated in Tokyo and later in Paris, where he has lived since the age of fifteen. He attended the Saint-Maur National Conservatoire and the Lyon National Conservatoire, graduating from both with full honours, distinguishing himself impressively with three gold medals. Proceeding to the legendary Conservatoire Supérieur de Paris, he won the first prize for pianoforte performance in 1995, which also won him a scholarship enabling him to further specialise at the Conservatorio di Santa Cecilia, Rome, obtaining maximum grades in his final examinations. While there, he also followed an intensive course in chamber music performance. He has attended numerous master classes with the best pianists in the world, including Lazar Bermann, Arie Vardi, Rudolph Buchbinder, Kazuoki Fuji, and others. A demanding performance schedule has taken him all over the world, from France to Japan, playing in solo recitals, chamber formations and with orchestras. He is the recipient of numerous competitions, winning first prizes in Munich, Barcelona, Paris, Bolzano (Busoni Competition), College Park – Maryland, the Montdidier European Competition – France, and others. 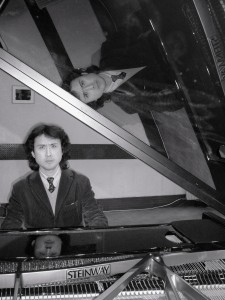