Scottish-born Jennifer Margaret Barker is Professor of Music at the University of Delaware, USA. Nonetheless, her compositional output almost never fails to make contact with her Celtic roots, and this Scottish legacy was in evidence in a wonderful concert that Caraid Trì (Three Friends) gave to a delighted audience on Saturday 9 July.

The programme consisted entirely of contemporary works by Jennifer Margaret Barker, together with one piece by Louise Burnet who, incidentally, also played the flute during the concert. Jennifer performed on the piano, while Emily Ruth Mitchel sang a few of the pieces that were scored for voice and a combination of piano/flute. Jennifer eased her way into the concert by immediately forging a lovely, intimate rapport with the audience.  She explained the nature of her works, the inspiration behind them, and also the mood and tone of the pieces.  The first to be performed was Dumgoyne (2012).  Dumgoyne, in fact, is a favourite mountain of the composer and, judging by the work she composed under this influence, there is certainly a personal relationship between the composer and the mountain. The work is scored for Flute and Piano and Jennifer’s style immediately made its mark in the  multi-coloured landscape of the musical texture, one replete with moments of light and shade, exuberance and introspection, hope and wistfulness. The harmonic language is most interesting; while firmly acknowledging traditional sequences it also is firmly contemporary, with brave excursions into the avant-garde without in the least sounding inauthentic. In fact, authenticity and honesty marked the composer’s idiom throughout. Without eschewing melodic interest, the work stops short of embracing sentimentalism of any sort.  The overall result was one of impeccable execution, with an implicit narrative thread running through the piece.

Burnet’s Caledonian Set, only very recently finished and, in fact, making its world premiere in this very concert, is a set of three exquisitely beautiful miniatures for soprano, flute, and piano.  This work is a firmly idiomatic one, attesting to Burnet’s own Scottish inheritance and her love for the wonderful nature that blesses this country.  One could feel a definite story-line from one piece to the next, and in Emily Mitchel’s beautiful voice, one that is rich, dark-hued and mellow at the same time, the composer found a remarkable instrument with which to transmit her message.

Gearr Aonach (2000) the first movement from Na Trí Peathrarichean, a three-movement work that is almost a secular cantata in its expressiveness and sentiment, came next. Gearr Aonach is one of three mountain ridges in the region of Glencoe in Scotland, the others being Aonach Dubh and Beinn Fhada.  In fact, they are known as the three sisters.  This was a wonderfully atmospheric piece, denoting the gentle wind the rustles through the crevices and the ferns, truly evocative and haunting.  Next came a piece that, contrary to the works performed thus far, was inspired by Barker’s sojourn on the island of Gozo last year when she visited to perform in the Victoria International Arts Festival for the first time.  A composer of profound sensibility, she could not fail but be inspired by the beauty of Gozo, with its silver seas and sultry heat.  The result was her work entitled … to the pale green sea of evening (2015), a piece scored for clarinet and piano.  In local clarinettist Mario Galea, Jennifer found a most accomplished performer who had no problem tackling the very difficult rhythms.  Mario Galea performed with his customary assurance – he is a sound musician with an acute sense of phrasing.  His tone colour suited the piece in its warmth and mellowness, while the equally difficult piano part was most ably performed by Barker.

The final piece on the programme was a sequence of settings of Robert Burns’ songs, namely, I’m o’er young to marry yet, The Gallant Weaver, The Seventh of November, and What can a young lassie do wi’ an auld man?  Robert Burns is rightfully regarded Scotland’s national poet, and his verses echo through highland and lowland equally. Barker’s setting of these four wonderful poems fully exploited the dynamic and tonal range of Mitchel’s wonderful soprano voice.  The melodic writing here was difficult in terms of both pitching and phrasing – hurdles that Mitchel overcame with confidence and assured poise.  She was extremely expressive, with impeccable diction throughout.  She could go from a forte to a subdued piano without the least effort and her projection came naturally to the last wisp of sound.  This is indeed a very beautiful song cycle, alternating from the light-hearted and flirtatious nature of a young girl to the more introspective and mature musings of an older woman.  There was a touch of cheekiness, too, when Jennifer, who was a pillar of support at the pianoforte, acted the part of the old man in the last song, beautifully bringing out the meaning of the text.

A well-merited, resounding round of applause greeted the end of this most unique and delightful concert. 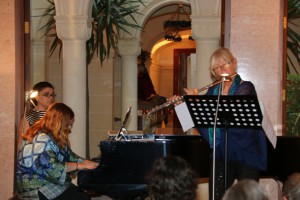 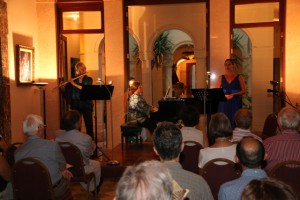 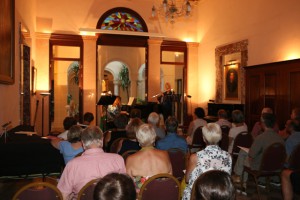 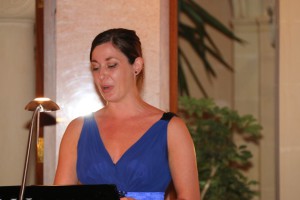 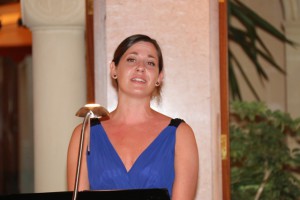 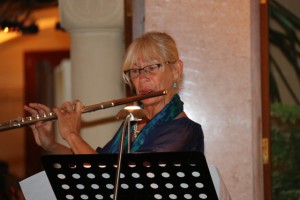 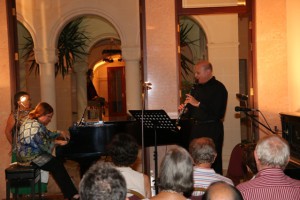 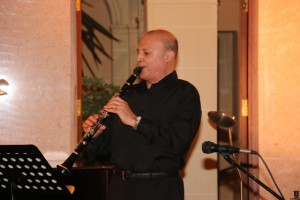