On Wednesday 17th June, an appreciative audience at St James Church in Victoria thoroughly enjoyed a clarinet recital by top Austrian virtuoso, Simon Reitmaier. A solo clarinet recital is a hard genre to come by – one generally attends a duo performance with a pianoforte or, more regularly, in a chamber ensemble. Attracting and sustaining an audience’s attention with a clarinet solo recital is no mean feat, but one which Simon Reitmaier managed with accomplished ease.

Starting with Bach’s Allemande BWV1004 (Partita no. 2 in D Minor), Simon immediately established himself as a performer who knows exactly what he is doing and what he wants his instrument to accomplish. This opening movement is earnest and purposeful and although it is a transcription it is one that is very cleverly made to suit the timbre and texture of the clarinet. This piece was followed by a totally contrasting one by contemporary Austrian composer Leitner’s ‘Für Simon-Vier Stücke für Klarinette in B’, a work that is specifically written for Simon Reitmaier. Falling into 4 distinct movements which are interconnected by a programmatic thread, Simon managed to coax all imaginable nuance and colour from his clarinet, from the softer palette to the more robust forte one.

Debussy’s famous Syrinx is originally written for flute. Reitmaier played a clarinet transcription. The musical language he managed to express was immensely cultured and refined. This was most powerfully evident in the use of whole-tone scales and other devices that lend the music a strange ambiguity. In Syrinx, Debussy de-emphasizes, even dispenses with, conventional tonal centres; much of the work’s potency instead derives from its delicate, fragmentary melodies and highly seductive timbral effects. This work was wonderfully performed with scrupulous attention to detail of phrasing and tone.

Karg-Elert’s Sonate is a work written for Clarinet solo. In it, the composer shows the quiet yet remarkable influences of composers such as Bach (for the structural framework), Grieg for the melodiousness, Debussy for its distinct exotic flavour, and Scriabin for the emotional depth. In general terms, his musical style as evidenced in this wonderful work could be characterized as being late-romantic with impressionistic and expressionistic tendencies. Also, it is worth noting that his profound knowledge of music theory allows him to stretch the limits of traditional harmony without losing tonal coherence. Reitmaier rose up to the occasion and managed to hold the audience in thrall of his extraordinary talent in controlling the tonal balance of the work.

Hommage à Richard Strauss by Béla Kovács came across as a work of exceptional virtuosity. At the end of the piece, one realized why this work remains one of the more resplendent pieces in the Clarinet repertoire!  Messiaen’s evocative Abîme des oiseaux, which is the 3rd movement from his monumental Quatuor pour le fin de temps, composed when the composer was in a Nazi concentration camp, fully brought out the pain, bewilderment and solitude that the context of the work implies. Loosely translated as ‘The Abyss of the Birds’, the work, through the medium of the clarinet’s sensuous lower range, seems to imply that while man’s experience on this earth is time-bound, the song of the bird is timeless. This was a truly haunting work that lingered on well after it was over.

Joseph Vella’s Three Songs for Phaedra op.56 is a high favourite with accomplished clarinettists and it regularly finds its way into a recital. Joseph Vella’s opus has overstepped the 160 mark, and this without taking into account his hundreds of unclassified works. Whether writing for big orchestral and choral forces, or for the more intimate genre of chamber music, Vella’s idiom is idiosyncratic, neo-classical in structure and with an ever-present lyrical vein which he seems unable or unwilling to suppress. Three Songs for Phaedra op. 56 is a sequence of 3 short songs that follow a narrative thread. In this work, Reitmaier did full service to the demands of the work, exploiting the entire tonal and emotional range of the clarinet to bring out the programmatic nature of the work, which is subdivided into three sections, namely, Phaedra in Love; Phaedra rejected; Phaedra in Death. In the last movement, which is scored for the more haunting and exotic-sounding Clarinet in A, Reitmaier created a beautiful tone that seemed to imply that even in death there can be sensuousness.

The last two pieces, namely, Osborne’s Rhapsody, and Pirchner’s ‘Drei Klare für Klarinette’ PWV 128, Reitmaier widened the scope of his programme to include works that are more contemporary and which enabled him to engage with different styles and indulge in more capricious moods. He showed a brilliant aptitude for improvization with the former work and with jazzy rhythms in the latter. A resounding round of applause greeted the end of the concert.

The organizers are grateful to the Austrian Embassy in Malta for making this concert possible. 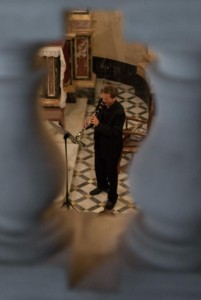 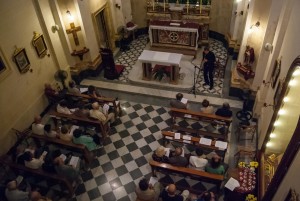 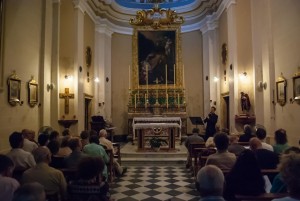 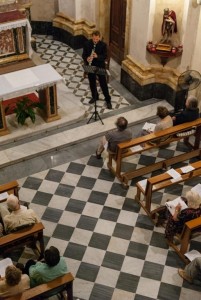