The evening’s concert saw Khorasan Quartet from London performing two wonderful string quartets, namely, Beethoven’s String Quartet in F Major op. 18 no. 1 and Borodin’s String Quartet in D Major no. 2.  This was the third string quartet ensemble in VIAF this year and they did not disappoint!  Made up of young musicians, their maturity belied their age, and the cohesion and balanced they manifested in their interpretations were most commendable.  Once again, this concert was held at the beautiful St Francis Church in Victoria, with its glorious acoustics enhancing the lovely tones of the ensemble.

Beethoven’s Quartet in F major op.18 no. 1 is in four movements, the first of which is an Allegro con brio.  Although there are parts that are quick and spirited, they are mixed with many lyrical qualities as well.  The opening motive, centering in on the pitch of F with a melodic turn, was interpreted an important one by Khorasan, as it returned in various ways throughout the movement.  The music took on a more fiery character in the development where the key turned to minor before working itself back into the opening motive and its various inventive (and sometimes surprising) manifestations to bring the movement to a close.  Beethoven’s sketches show that he composed the second movement, an Adagio, with the intention to depict the tomb scene from Shakespeare’s Romeo and Juliet.  Beethoven’s markings for the movement read Adagio affetuoso ed appassionato, and this emotion came to the fore immediately with the opening violin melody which sang out over a pulse of moving triplets in the other instruments.  The melody returned again in the cello and was wonderfully developed in a bittersweet manner, moving for a time from the minor key into major.  There was a stormy development before the melody returned, this time over a much more agitated accompaniment.  Beethoven’s use of silence between high-tension chords is original and the way this strategy was implemented by Khorasan had great dramatic appeal.  The third movement was a clever and playful Scherzo whose uneven phrase structures and boisterous accents provided a feeling of surprise and jocularity.  In the Trio section the first violin was kept busy with numerous brilliant passages.  The final movement was a pleasant Allegro that, similarly to the first movement, developed the opening motive in many creative ways. This motive, which was introduced by the violin, was built on a sequence of fast-moving triplets, the effect of which was especially virtuosic.

Borodin’s String Quartet no. 2 in D major differs from many of the composer’s other works in two ways: it was completed quickly, during August 1881, and it lacks a published programme.  These two factors may be related; Borodin dedicated the Quartet to his wife Ekaterina, and it was written as an evocation of when they met and fell in love in Heidelberg 20 years earlier.  The composer seems to have had a story to tell, and a poignant one, too, representing himself in this Quartet with the cello (he was an amateur player), while Ekaterina is portrayed by the first violin.  Each of the movements is warm and blissful, the whole suggesting the depiction of a growing, deepening love.

The first movement, an Allegro moderato, opened with a sweet, sighing melody, traded between first violin and cello in an almost conversational manner.  Borodin and Ekaterina dominated the rest of the movement with a beguiling discourse; even the development brought effortless, serene re-shaping of the exposition’s melodies, and the luminous coda rounded out the movement nicely.  A Scherzo, written in a free sonata form, followed.  The light first subject skipped along gracefully, while the second subject was reminiscent of a waltz; both are gentle dances, and were gracefully and gently handled by the Quartet.  The development was in more decisive duple rhythm, but the recapitulation soon brought back the triple rhythm and its attendant character.

Borodin and Ekaterina reappeared in the famous Nocturne which followed.  Over a luminous gauze of accompaniment from the second violin and viola, the cello introduced a long, tender, ardent melody marked cantabile ed espressivo.  This melody soon passed to the first violin, which played it over commentary from the cello.  A more decisive second theme entered on both instruments, which developed it before playing the first theme in an intimate canon.  The first theme lingered until the end of the movement, when in a long coda it ascended until the violin and cello played it together in a silvery thread of tone.  The finale began with an Andante introduction, as if unwilling to come down from the emotional heights of the previous movement, soon leading into a quicksilver, energetic Vivace, whose long coda provided a fittingly joyous conclusion to the entire work.  As love letters go, Borodin’s String Quartet no. 2 is unsurpassed; as String Quartets go, it is deservedly loved: this was fully enhanced by the beautiful interpretation given to it by Khorasan Quartet! 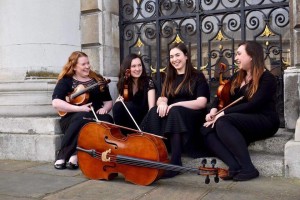 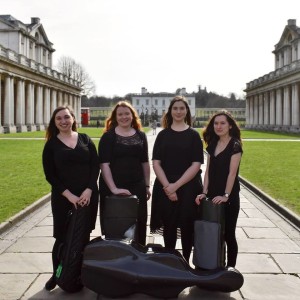