As anticipated, this evening’s pianoforte recital by Venetian virtuoso Gabriele Vianello was a resounding success. Aula Mgr G. Farrugia, the fully-fledged concert hall at the back of St George’s Basilica, was packed with patrons. Piano recitals are simply a magnet for music lovers, and having heard Gabriele in previous editions of our Festival, patrons knew there were in for a treat.

And what a treat!

To start off his recital, Gabriele chose Mozart’s Adagio in B Minor K540, a work that is most untypical of the impish Mozart in that it is both sober and sobering, quite unlike the customary teasing and playfulness that one associates with this great composer. Sedate and rather weary, the melody is simply articulated without any frills or fancies. It develops into an almost dramatic canvas that borders on the ominous but dynamically, the level never really rises above a mf. As any interpreter of Mozart knows, nothing that the composer writes is easy to execute. Gabriele chose the precise tempo, an Adagio that struck an equitable balance between the solemn and the the more evenly paced. In fact, one was struck throughout this evening’s performance by the pianist’s acute sense of getting the right tempo in every single movement he played.

This was most in evidence in the monumental Beethoven Sonata no. 32 op. 111, a work that could strike terror in any accomplished performer’s mind. Structurally of massive proportions, the Sonata started with a grim introduction (Maestoso), typical of the composer’s serious style, because it initiates the narrative with a question, or dilemma, with dark, emphatic chords followed by trills, which introduce an added element of uncertainty. This moment of undecidedness, as it were, creates a crisis, in the sense of choice, presenting the performer (and the audience with him) with a two-pronged route that one necessarily has to negotiate. One might wonder whether the remainder of the movement would search out some answer to the apparent question, as in the Pathétique, but in op. 111 this does not happen. It seems that a lack of a resolution reflects the composer’s realization that vicissitudes of life may inspire questions which cannot be answered. The main body of the first movement, marked Allegro con brio ed appassionato, began in a sinister vein on the bass notes with the appearance of the main theme, itself a dark, hesitant creation. After it was presented in full, the tempo slowed down somewhat, ushering in another idea. Tranquil and reassuring, this new idea is short-lived, and the main theme returned. After the narrative was repeated, with some alterations, the development section began.  Here, in the midst of much brilliant contrapuntal writing, which Vianello tackled with supreme intelligence and the right emotional balance, the mood darkened, and an element of dramatic tension was introduced as the main theme goes through several transformations. When the alternate theme appeared after a climactic episode, the atmosphere changed from somber to mysterious. There is no reprise as such, since the main material is not repeated, but rather is reviewed in partial form before reaching a final climax, after which the music fades slowly.

The second movement, Adagio molto semplice e cantabile, opened with one of the composer’s most serene creations in any genre. The theme sounded peaceful and angelic, but almost static, too, in its glacial pacing. It struck one as not the kind of melody that might yield variations of sundry character. This theme and the first three variations formed the first section of the movement, wherein the atmosphere and character of the music changed from the sublime to the almost giddily joyous and back to the sublime. It is the fourth variation that marked the second half of the movement, the most profound music in this work. After a series of brilliant yet unsettling trills, this section began with the variation slowly emerging from a haze and transported the listener to the highest levels of musical experience. Many have made of this long closing section as a ‘farewell’ by the composer. Indeed, Beethoven seems to fashion a musical language transcending terrestrial constraints, and the notes appear to be ascending into the heavens as the ending approaches. Gabriele’s playing was throughout in control and he managed to achieve that classical poise that is so difficult in a work that could easily be misinterpreted as a Romantic piece. Much as one is (mis)led to believe that the emotional register is raw and Dionysiac, the inverse is true. The architectonic structure is Apollonian, one that seems to have come down straight from Bach, and lends the music a tone of sublimity that seems only possible in the most remarkable German music (am here also thinking of certain instances in Schumann and so much in Wagner.) This is what was transmitted in this evening’s interpretation of a Sonata that does not normally find its way easily into the concert repertoire.

Although more arguably acquainted with the ‘shorter’ genres such as his wonderful Ballades, Scherzos, Etudes, Mazurkas, Waltzes, and more, Chopin also emulated his great Classical predecessors with his 3 Sonatas. Vianello chose Sonata in Bb Minor op. 2 no. 35 to close off his recital.

Chopin wrote the most famous Funeral March that became the third of the four movements here in 1837 and composed the other three movements two years later. Almost since it was first heard, this work was looked on not as a sonata in form, but as a collection of four rather diverse pieces the composer assembled under one musical roof, Schumann being the first to make the charge of a lack of cohesion between the various movements. However, several musicologists in the late twentieth century pointed out a number of previously overlooked — or at least ignored — qualities in this composition that bind the movements as inseparable musical siblings.

The Sonata can be viewed as something of a life cycle. The first movement serves as the life force, struggling, loving, and suffering. Never one to alienate himself from singing for any length of time, amidst the turbulence of this first movement, the lyrical ‘cantabile’ of a Chopin musical line rears its head to soothe the mind and calm the senses. Tackling the ensuing Scherzo, Vianello showed supreme mastery, both technically and musically, enacting demonic forces in the main section and good forces in the lyrical alternate melody of the trio section.  The well-known third movement, Funeral March, was played at precisely the right tempo – neither dirge-like nor too hurried. It transmitted such class, poise and beauty that I, for one, realized how noble it sounds in the original. Thinking of the hyperbolic million transcriptions that have been made of this Funeral March, nothing compares to the original when played impeccably as it was this evening.

Following the sombre tones of the Funeral March, which is largely built on chordal structures, alternating with that wonderful Chopin melody before returning to the original funereal tones, the ghostly finale, with its swirls of dark winds, evoked many ominous images in the minds of listeners. Vianello’s shimmied and swirled like gossamer across the keyboard, creating an almost surreal atmosphere in a land haunted by spirits and ghosts. It came across as a final picture of the deceased, who lies in his quiet grave, with the rustles of the wind the only disturbance above.

This was an exceptional recital, one that I wished would not come to an end – such is the feeling of well-being and intellectual pleasure it afforded the audience. A prolonged, resounding applause prompted Vianello to perform one of Chopin’s Etudes from op. 10.

May we be privileged with welcoming Gabriele again in the future! 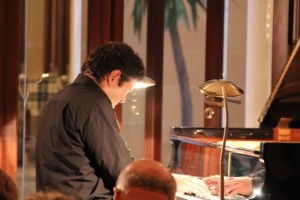 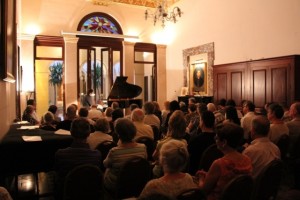