Yet another Norwegian presence amongst us tomorrow, Sunday, evening. It’s not the much needed cool weather, however, but a young magnificent brass ensemble, Trombonet, who will be performing works by Koetsier, Gabriele, Hindemith, Couillaud, Scheidt, Schumann, Banchieri, Rimsky-Korsakov, and Uber.

Trombonet Quartet consists of four young musicians who are all students at the prestigious Barratt Due Music Institute. They started performing as a chamber Ensemble four years ago and since then they have achieved outstanding results in contests and competitions, apart from being heavily engaged for concerts. They are the recipients of both the 2014 and the 2013 Norwegian Music Competition for Youths and last year they also came first in the National Competition entitled Midgardkonkurransen. Despite their youth, the Quartet has performed extensively, to include venues such as the Norwegian Royal Opera House, Munich Museum, and also at the Oslo Concert House. They have also shared performances in programmes scheduled by and for the Oslo Philharmonic Orchestra concerts. Three years ago they participated in a big wind and brass project at the Philharmonie, Luxembourg. Last year, the Quartet was twice invited to perform during prestigious award ceremonies at the Royal Castle.  Individual soloists in their own right, they have participated in master classes with world-class musicians, most notably, Sverre Riise, Arnulf Naur Nilsen, and Tine Thing Helseth. 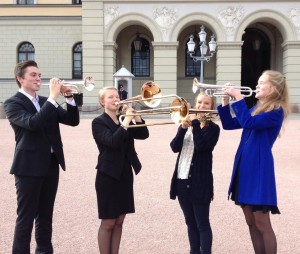