Piano recitals can generate a lot of excitement.  When the performer is a Professor of Pianoforte Studies at the Mozarteum expectations run high. Biliana Tzinlikova did not in the least disappoint: rather, she totally overwhelmed an awe-filled audience.

Biliana’s choice of programme was a daring and adventurous one. Arguably, nothing could have commanded a more authoritative presence that starting a recital with Bach’s monumental Partita no. 6 in E Minor. With this work, Bach gives us one of his greatest masterpieces. It is a stupendous work on the grandest scale, one in which we feel his incredible strength of character, security, warmth of heart, and deep faith. Here he is no longer writing for popular appeal but on the highest intellectual and emotional plane. Biliana was assertive from the very first notes. The work opens with a Toccata where similar outer sections frame an extended fugue.  Both the opening measure and the subject of the fugue made use of the ‘sigh’ motif (a descending, leaning appoggiatura) to add extra expressivity. By keeping the same basic tempo throughout the Toccata, unity was achieved by the pianist (this seems to be called for by Bach, as material from the first page later appears in the last episode of the fugue).

The ensuing Allemande, with its poignant chromaticisms, was followed by a remarkable Corrente. Biliana’s fingers took an almost physical pleasure in executing its mischievous syncopations with delicacy, rapidity and brilliance. A brief Air, with a surprising second ending, preceded the Sarabande, surely one of Bach’s greatest creations.  At first sight (or upon first hearing) this movement seemed baffling. It can take time to discover the framework beneath the profusion of notes, and to realize its emotional power. In Biliana’s interpretation, the listener felt that Bach was alone in this Sarabande, alone in communion with his maker in a dialogue that is at once sorrowful, hopeful, passionate, and at times exalted (the marvellous, brief modulations into major keys in bars 7, 8 and 30 interrupted the darkness with flashes of light). To go from deep inside Bach’s inner world straight into the Tempo di Gavotta can come as a bit of a shock, but one could only marvel at how Bach immediately made his music dance, albeit in a minor key.  This is not a Gavotte in the real sense of the word; it is much more like an Italian Giga in 12/8 time.  Bach really outdoes himself in this final Gigue, demanding the utmost in mental virtuosity from the player, and Biliana did not disappoint.  Played at a lively tempo, the severe counterpoint could still be made to dance.  This was one piece that spoke to an enthralled audience ever more powerfully: sublime and compassionate, graceful, warm, and relentlessly intricate, a demonstration of unmatched craft in music history and genuine, poetic imagination in its execution by the formidable pianist.

Tailleferre’s Partita sparkled.  It came across as quintessentially French in its use of modernist techniques.  Showing the clear influences of Fauré and Debussy, there was a barely perceptible veneer of irony beneath the shimmering surface of musical pirouetting of the Perpetuum mobile.  The Notturno glossed over a harmonic fabric that was reminiscent of late Impressionism, while in the final movement, Allegramente, the dreamy quality of the previous movement was replaced by a more robust style. Yet, despite the three distinct moods pervading the Partita, typically, the work never lost its characteristic French qualities of elegance and refinement.

The next work performed was Louise Farrenc’s Variations Brillantes op. 15 (On an original theme from ‘Anna Bolena’ by Donizetti), a work that attested to the very fashionable ‘Theme and Variations’ style prevalent in the age.  Although one can say that the style was firmly rooted in the Classical period, especially in the works of Mozart and Beethoven, Bach had already set the trend with his magnificent Goldberg Variations. Farrenc works the main melodic line of Donizetti’s catching tune in the aria ‘Nel veder la tua costanza’.  The performance started with an introduction that is orchestral in its power which then led into the inevitable purity of line and exquisite tenderness of a Donizetti melody. Here, Biliana’s velvety touch came out in all its sensuality and poise. This main theme then developed into a series of variations, some mesmerising, others calmer, some fiendishly difficult, others suave.  It is a piece that tested the mettle of any self-respecting performer, one that Biliana brought off with confidence and understatement.

The last work on the programme was Chopin’s Andante spianato e Grande Polonaise Brillante op. 22.  The headnote and dating of this work may seem a bit confusing until one understands the background of this piece.  In the winter of 1830-1831, while in Vienna, Chopin wrote the Grand Polonaise for piano and orchestra, affixing to it the opus number of 22.  Later, he composed the Andante spianato and grafted it onto the Grand Polonaise to serve as an introduction, thereby forging a new, expanded work, also designated op. 22.  In the process, he fashioned versions of the work for both piano solo and for piano and orchestra.  This effort, incidentally, marked the last time that Chopin composed anything for orchestra.

The solo version begins with a lovely theme in the upper register, clearly of a Romantic bent.  Here, Biliana’s mastery shone like the lone star.  At once commanding and resigned, the pianist’s control never wavered, the singing quality of her playing reached unparalleled heights, while the unleashed emotions never verged on the sentimental.  Like many of the composer’s creations, there was something sad in its beauty, which to some will always represent the exiled Chopin’s homesickness for country and family.  A consoling, mellow theme was next heard and after recalling some of the main material, this section ended quietly.  The unusual word “spianato” means “level” or “smoothed,” and these concepts gave an idea of the music’s tone.

The Grand Polonaise began with a fanfare and then launched into one of the composer’s more attractive dance themes.  It was light and delicate, joyful and aristocratic, and full of the colour and subtlety one associates with so many of Chopin’s Polonaises.  Upon restatement, the theme was given more ornamentation and glitter.  In its middle section the mood turned playful at the outset, but then became more intimate and subdued while retaining its dance-like character.  Some passages here resembled parts of the first movement of the composer’s Piano Concerto No. 1 (1830).  The main theme returned and the piece concluded with a brilliant coda, parts of which, once again, looked back to the First Concerto, this time to its magical last-movement coda.

A well-merited resounding applause greeted the final notes, after which Biliana regaled an enthused audience with two encores. 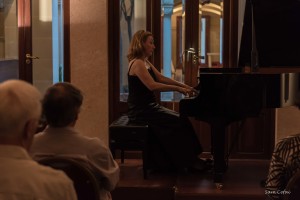 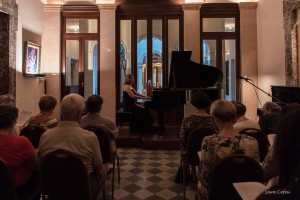 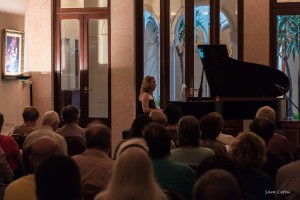 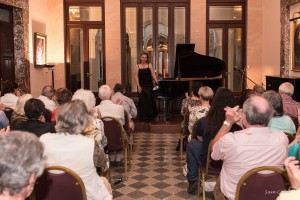