The Baroque Concert Series within the Victoria International Arts Festival came to a resounding and poignant close with a performance of two magnificent works by award-winning ensemble Le Jardin Musical of France.  Combining a level of musicianship that is nothing short of awe-inspiring, together with an all-embracing humanism, this wonderful group were the proverbial cherry on the cake that was the Baroque series of concerts this year.  The beauty of the performance was further enhanced by being performed in the glorious Baroque surroundings of Gozo’s golden basilica, St George’s.

Performing on period instruments, Le Jardin Musical was led by the formidable Christine Antoine, with Katia Lagresle (Violin), Catherine Simon (Viola), Denis Jeannet (Violoncello), Olivier Destéphany (Double Bass), and the masterful Pierre Perdigon (Harpsichord).  This year, the ensemble were accompanied by two stunning singers, Maêlle Vivarès (Soprano) and Marie Favier (Alto), who tackled the glorious Salve Regina of Alessandro Scarlatti, and the Stabat Mater of Pergolesi.  In fact, these two works were the items presented on the programme this year.

One thing that immediately strikes the listener when hearing this ensemble play is the absolute and unequivocal unity of sound.  Blending seamlessly, the different tones of the instruments creating one big sonority that, in some unbelievable way, does not kill or suffocate the individual idiosyncratic timbre of each instrument.  Theirs is a tone of liquid beauty.

Alessandro Scarlatti ventured four times with the Salve Regina text, of which he draws compositions for various ensembles.  Scarlatti’s music forms an important link between the early Baroque Italian vocal styles of the 17th century, with their centres in Florence, Venice and Rome, and the classical school of the eighteenth century. Scarlatti’s style in his Salve Regina, however, is more than a transitional element in Western music; like most of his Naples colleagues he shows an almost modern understanding of the psychology of modulation and also frequently makes use of the ever-changing phrase lengths so typical of the Neapolitan school.

The treatment of the text in the version for soprano and alto obeys to the usual practice for the motets of a certain length: the antiphon is divided into ‘numbers’ of contrasting character alternatively entrusted to the duet and to the solos.  In line with the modern style, Scarlatti chooses to not emphasise the most remarkable moments of the text, but instead to provide an internal coherence to each section, keeping the expressive expedients to enhance a few elements and relying instead upon an harmony and melody rich writing and upon the virtuosity of the vocal parts.

Plunging immediately into this work, the audience knew it was in for a rare treat.  As is typical of Baroque writing, this was word-painting executed to a refined finish.  The voices of the soprano and the alto were extremely compatible, with the high silvery tones of the former complementing the more robust and dark-hued qualities of the latter.  These are not just singers; they are musicians — and that’s what makes the difference.  Every note had its nuance, every rest had its weight.  Phrases were impeccably contoured, long-stretched breathing sounded as natural as daylight to them.

The much-awaited Stabat Mater by Pergolesi was next on the programme.  A long work of exceptional beauty, this was a performance that did not fail to move the audience with its sheer beauty, poignancy and masterful delivery.  Announcing that the evening’s performance was dedicated in honour of Mro Joseph Vella, the air was even more heavy with expectation and emotion, and the ensemble (together with the singers) did not disappoint.  If Scarlatti’s work conforms to word-paining, Pergolesi’s adheres to tone-painting, the main difference being that the latter captures the mood aurally, while the former does it visually.  Perhaps it’s more challenging to relate to tone-painting than word-painting, for the aural sense is more refined and makes more difficult demands on the audience.

Stabat Mater opens with a setting of the first stanza for the two voices, which entered after a brief and moving instrumental introduction, music that Mozart might have had in mind as he wrote his own Requiem half a century later.  The ‘dissonant’ 2nd intervals were impeccably placed, the emotion injected into the phrasing was the perfect dose, and the ensemble-playing more than complemented the voices: it participated in the unfolding of the drama, one that depicts the greatest story every told.

The second stanza is a more animated soprano solo, the instrumental and subsequent difficult vocal trills symbolising the piercing sword suggested in the text.  O quam tristis et afflicta brought the soprano and alto together – in a more reflective mood, to be followedby the fourth stanza, allotted to the alto.  This movement came across as almost Handelian in its operatic vigour, a Baroque example if there ever was one.  The soprano introduced the fifth stanza, the question proposed countered by the following interrogative stanza from the alto, before the two voices blended easily, at first in sad reflection and then in animated conclusion.  Vidit suum dulcem Natum is set for soprano, with an affecting instrumental introduction and hesitant pointing of the words dum emisit spiritum.  The alto invoked the Mother of Christ, fons amoris, with deepest feeling.  The two singers then joined again in a vigorous fugal Fac ut ardeat cor meum, to which the setting of the twelfth stanza, Sancta Mater, istud agas, and the following verses, for the two voices, offer eda gentler contrast, the soprano answered by the alto before both join in Fac me vere tecum flere. The following alto solo had a dramatic instrumental introduction, echoed subsequently in the vocal line.  The soprano and alto joined in a duet of greater cheer, continued more reflectively in the sanguine expectation of salvation expressed in the final stanza, capped by an energetic Amen.

Such was the impassioned applause at the end that the ensemble repeated the vigorous Amen again.  This was one performance not likely to be forgotten by those privileged to be present. 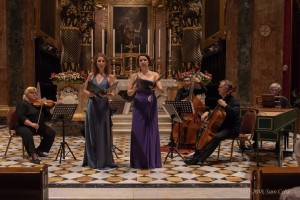 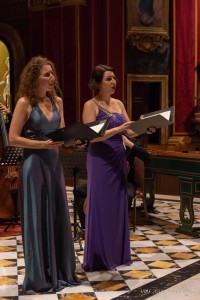 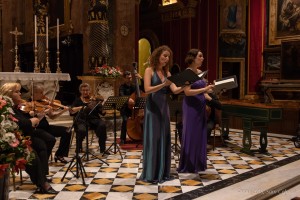 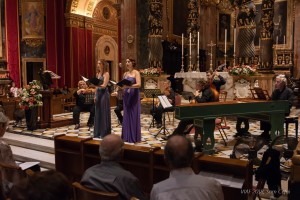 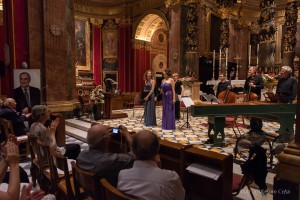 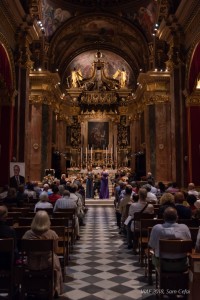