Emirzeth Henriquez and Silvia Marrero Herrera on the violin, Raquel Cobo Alvarez on the viola, and Ilayda Irem Canduran on the violoncello together form an impressive ensemble capable of performing very maturely despite the very young age.  In fact, one feels that this Quartet has a long way to go and it is hoped that their potential is fully realised.

The concert started with Beethoven’s String no. 1 in F Major op. 18.  Cast in four movements, the first is an Allegro con brio.  Although there are parts that are quick and spirited, they are mixed with many lyrical qualities as well.  The opening motive, centering in on the pitch of F with a melodic turn, was an important one, as it returned in various ways throughout the movement.  The music took on a more fiery character in the development where the key turned to minor before working itself back into the opening motive and its various inventive (and sometimes surprising) manifestations to bring the movement to a close.  Beethoven’s sketches show that he composed the second movement, an Adagio, with the intention to depict the tomb scene from Shakespeare’s Romeo and Juliet.  Beethoven’s markings for the movement read Adagio affetuoso ed appassionato, and this emotion emerged immediately with the opening violin melody, singing out over a pulse of moving triplets in the other instruments.  The melody returned gloriously on the cello and was developed in a bittersweet manner, moving for a time from the minor key into major.  There was a stormy development before the melody reemerged, this time over a much more agitated accompaniment.  Beethoven’s use of silence between high-tension chords is original and had great dramatic appeal.

The third movement was a clever and playful Scherzo whose uneven phrase structures and boisterous accents provided a feeling of surprise and jocularity.  In the Trio section the first violin was kept busy with numerous brilliant passages.  The final movement was a pleasant Allegro that, similarly to the first movement, developed the opening motive in many creative ways.  This motive, which was introduced by the violin, developed on a sequence of fast-moving triplets, the effect of which was especially virtuosic.

Mendelssohn’s gorgeous String Quartet in A Minor op. 13 is another canonical work which finds its way on the programmes of all established string quartets.  Arantius delivered a memorable performance, one which echoed long in the memory.  In the introduction to the first movement is a quote from Mendelssohn’s song ‘Ist es wahr?’ the first line of which is “Is it true you are waiting for me in the arbor by the vine-clad wall?” Because of this, some writers have suggested the piece derives from Mendelssohn’s emotions concerning a youthful love affair.  A much more powerful and significant influence in the Quartet, however, is that of Beethoven. After the Introduction, the first movement burst into a passionate sonata-form structure in which the material was beautifully treated in counterpoint.  A dissonant transition led to a secondary theme, group, made up of three themes.  The development section was frantic, and after the recapitulation, there was more development in the coda.

The pensive slow movement is marked Adagio non lento. The ‘Ist es wahr’ figure from the first movement appeared in the first section.  Its central, fugal segment is clearly a reference to the fugue in the middle of the slow movement of Beethoven’s Quartet in F major, op. 95.  Not only are the subjects very similar, but the fugue in both cases begins in the viola and is answered by the second violin.  This fugal material alternated with the beginning of the movement, but in the Mendelssohn the two sections are less disparate and come together at the end.

Of the four movements in the op. 13 Quartet, the third, an Intermezzo, had a more lyrical sound than many of Mendelssohn’s Scherzos, and the contrasting central section was filled with youthful liveliness.  The development section contained reminiscences of the recitative introduction and the fugue of the second movement, which returned in the coda.  Mendelssohn brought the listener full circle by closing with a reprise of the Adagio introduction to the first movement, stretching the melody of ‘Ist es wahr’.  Here, the first violin made a continuous line from reminiscences of the introduction to the main theme of the finale, the second-movement fugue and the main motive of the first movement, unifying the entire piece and making clear the relationships between the themes.

A wonderful performance that was greeted with rapturous applause from a receptive audience. 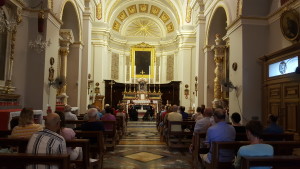