This evening’s concert is yet another particular one in that it presents a Trio from Italy, the Kalamus Trio, who specialize in the technique and interpretation of 17th and 18th century music composed specifically for the Basset Horn. Experts on the Clarinet and the Basset Horn, the concert concentrates on ‘Vienna in the time of Mozart’. Added to the uniqueness of the concert is the participation of mezzo soprano Xu Jie, herself a specialist in late Baroque and early Classical opera.

As indicated, the programme consists of Mozart pieces almost entirely, to include the more famous arias from his major operas, namely, Le Nozze di Figaro, Don Giovanni, and the Magic Flute. Interspersed are Divertimenti and other pieces by Mozart and Stadler.

This evening’s concert will be in St George’s Basilica, and starts at 8pm.

Kalamus Trio came together sharing a passion for the sonority, colour and timbre of the clarinet as it developed through different eras and styles. This common interest has led the Trio to explore and discover a repertoire that is as vast as it is intriguing. The Trio is comprised of Rodolfo La Banca, Massimiliano Limonetti, and Angelo Litrico, and its main focus is on the High to Late Baroque and Early Classical clarinet which enables a unique expressive dynamics to come into being, one that is no longer possible to savour with modern instruments. In fact, for this evening’s concert, Kalamus shall be regaling the audience with different types of clarinet, ranging from the tenor, alto and bass Denner’s prestigious ‘chalumeau’ to the 6-key classical instrument by Grenser. The Trio has performed extensively in their native Italy, most notably at the Teatro Comunale, Ferrara, Convegno su Metastasio-Mozart near the Seraphicum Auditorium, and with the Amici della Musica, Rome. They have also attended specialized master classes at the Royal College of Music, Stockholm, the Conservatorio Superiore Xi’An and the Conservatorio Superiore Luo Yang, China. They have also performed all over Europe and South America, to include Argentina and Brazil. The three members of Kalamus are Professors of clarinet performance, composers and transcribers, and are particularly dedicated to the ancient repertoire as well as having more than a superficial interest in contemporary music.

Xu Jie is a Chinese mezzo-soprano. She started her singing lessons with He Chunliang and Shi Shihua, and pianoforte under the tuition of Shi Xiaoya at the Music Conservatory Xi’an, China. She pursued postgraduate studies at the Belarusian State Academy of Music and two years ago she was enrolled to specialize in opera at the Conservatorio di Ferrara with Paolo Coni and Cinzia Forte. She is the winner of numerous competitions, most notably in China, in both the vocal and the pianoforte disciplines. Such accolades have led to numerous scholarships from the Chinese government, enabling her to pursue higher studies abroad. Apart from singing with chamber ensembles, Xu Jie has also performed with orchestras, particularly in Belarus, Finland, and Sweden. Last year she gave a series of highly-acclaimed concerts at the Palazzo Roverella and the Palazzo Bonacossi, Ferrara. 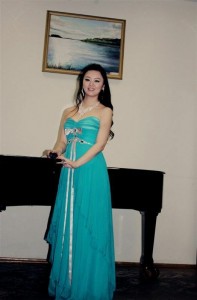 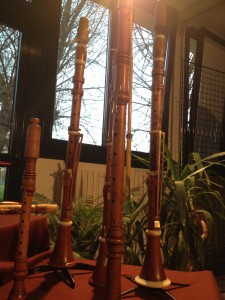