Tomorrow evening we have yet another eclectic concert, this time it’s clarinettist Simon Reitmaier from Austria. He will be delighting the audience with works ranging from the Baroque – transcriptions specifically made for the Clarinet – to the contemporary. The chosen programme includes works by Bach, Debussy, Elert, Messiaen, Kovacs, Osborne, Pirchner, Leitner and Joseph Vella.

The concert will be at St James Church, Victoria, and starts at 8pm.

Simon Reitmaier hails from Austria. He commenced his musical studies in two great cultural cities, namely, Salzburg and Vienna. Graduating with full honours, Simon is also the recipient of numerous high-profile Competitions, amongst which one finds the Carl Maria von Weber International Competition, Essen, and the Gradus ad Parnassum Competition, Austria.  Apart from being an avid chamber music player, Simon quickly developed an international career as a soloist, appearing with the Duisburg Philharmonic, Niederösterreichische Tonkünstler, Orchestra 1756, and others, as well as enjoying collaborations in chamber ensembles with members of the legendary Berlin Philharmonic, NDR Hamburg, RSO Vienna, Salzburger Soloists, Twins Quartet, and more. Performances have seen him touring the globe, from the U.S.A. to Japan, Russia, Taiwan, and the whole of Europe. In June 2013, Simon made his much expected debut at the famous Carnegie Hall, New York, with the Gustav Mahler string quartet. In the Autumn of 2014, Simon issued a much critically-acclaimed CD entitled Im Atem der Zeit, consisting of works for solo Clarinet. 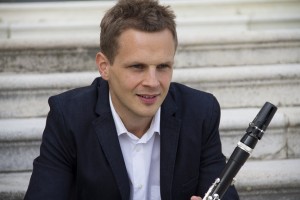