Having a very young performer playing in a festival that includes such world-class names as the Sistine Chapel Choir, the University of Delaware Chorale, the Malta Philharmonic Orchestra, Urban Quartet, Biliana Tzinlikova and Thomas Riebl, Martinu Quartet and Daniel Veis (the list is endless), it is with a gentle dose of trepidation that one attends to such a performance. Yet, Swedish violinist Kitiara Braune, accompanied by English pianist Tom Armitage (who stepped in at the 11th hour, to add to the apprehension) simply dazzled. Kitiara is the prize winner of the national competition for youths in Norway (where she studies), and no wonder! A rather timid and very quiet girl on the social side, the moment she went on stage she was transformed into a superb, dynamic, and masterful violinist that belies her 20 years of age.

Kitiara started her performance with Elisabeth Jacquet de la Guerre’s Sonata in D Minor for Violin and Piano.  This work does not find its way regularly into concert programmes and was unknown to most of the numerous patrons attending on the evening.  A hauntingly beautiful Adagio set the mood for the gem of a piece by Elizabeth de la Guerre.  It unfolded as a sort of recitativo stromentato, with the plaintive melodic interest resting entirely on the violin.  The ethereal beauty of the melody as played by Kitiara had a singing quality to it that could almost be performed vocally.  In contrast, the first Presto of this Sonata developed into a sprightly movement that was a dialogic exchange between both instruments.  The mood was light and chirpy, dispelling with the sombre and majestic tone of the first movement.  A second Adagio followed.  This more or less recaptured the mood of the first one yet with a lighter tone to it.  The violin became more virtuosic and improvisatory over rippling arpeggios on the keyboard, leading to the second and third Presto movements which were rhythmically staid and not adventurous yet melodically full of modulations.  The Air came across as a short ravishing movement that attested to the glorious decorative tones of the Baroque.  The final movement brought together the entire work to a tightly-knit structure, with figurations and cascading notes, syncopation and ornaments embellishing the piece.

Next came the hauntingly poignant Baal Shem by Ernest Bloch.  Plaintive yet reassuring, mystical yet assertive, this piece, reminiscent in tone of Bruch’s Kol Nidrei needs passion aplenty to carry it off.  It virtually embraces the entire emotional, tonal, and dynamic range of the violin.  Kitiara and Tom gave an exquisitely beautiful rendering, whether in the most extrovert of the movements, namely, Nigun or the most introspective, Vidui, or the final triumphant section entitled Simchas Torah.  Whatever the mood, it was captured by these two performers, with the violin foregrounding the melodic interest throughout, especially the sensual tones on the G string, and the pianist dutifully performing the role of accompanist with discretion and attention to detail.

Beethoven’s Sonata no. 5 in F Major op. 24 more commonly known as the ‘Spring’, is a lovely work that attests to the freshness and vitality one invariably associates with the composer’s early work.

The opening Allegro began with one of those generously lyrical themes, sung by the violin over delicate keyboard accompaniment.  A second theme group came across as busier and more clouded, but the soft sunlight soon returned in the curvaceous opening melody.  The slow movement, Adagio molto espressivo, shifts to the key of B flat and a deeply pensive mood ensued on the part of both performers.  The piano first presented the nostalgic melody, upon which the violin then meditated for a while.  The two instruments then engaged in a gentle dialogue based on this theme.  The witty third movement, Scherzo and Trio – Allegro molto, began and ended with a brief stop-and-start tune, with the violin deliberately out of sync with the piano.  In the middle comes a very brief, skittering passage for both instruments.  The final movement was far more substantial.  A rondo marked Allegro ma non troppo, it began in a pleasant, rather courtly Mozartean style. This refrain returned in various guises, although never significantly altered; in between came minor mode passages of some agitation and modest drama, although the sunny disposition of the main theme won out in the end.

Wieniawski’s Légende op. 17 was such a joy to listen to.  Once again, Kitiara emerged as a virtuoso in terms of technical ability, and also an interpreter with regard to her mature reading of the work.  Whether it was the dizzying technical brilliance, or the seductive tones in the slower passages, she simply dazzled.

The concert came to a close with with Kroll’s Banjo and Fiddle, a most apt piece to round up such a diverse programme of works.  Shimmering and pyrotechnical, Banjo and Fiddle is a virtuoso work that attests to what has been ascribed as the ‘demonic’ qualities inherent in the violin.  Alternating dizzyingly fast tempos with more lyrical ones, it explored all the technical difficulties of pizzicato, glissandi, and harmonics.  Strongly influenced by traditional American styles of folk fiddle playing, Banjo and Fiddle was popularized by regular inclusion in the recitals of the legendary Jascha Heifetz and Fritz Kreisler. Opening with a series of banjo-like pizzicato chords over a “romp-till ready” style accompaniment, the violinist soon launched into the main theme, set in a characteristic popular idiom. There was a dreamily reflective passage midway through, but for the greater part, it emerged as a spirited and energetic virtuoso miniature that exploited multiple stopping and ricochet bowing techniques, often at very rapid speeds.

A very warm applause greeted the final flourish, after which two encores were given.  It was nothing short of a miracle when one considers that Kitiara and Tom only got together the evening before their concert.  Throughout, in Tom Armitage, Kitiara found a most sensitive and reassuring accompanist, steady and confident, never overbearing yet providing the necessary support the soloist needed.  A true testimony to talent and commitment!  Well done! 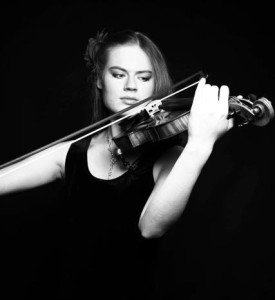 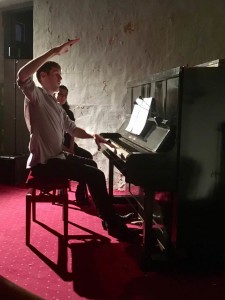