The Victoria International Arts Festival‘s international profile continues to be enhanced in an official manner when competitions such as the Norwegian National Music Competition for Youths (as well as that of Upper Austria) offer their yearly prize winner the coveted opportunity to perform in VIAF.  Norway has been sending exceptionally talented musicians for the past 14 years, and this year’s performer continued to consolidate Norway’s excellent standards as well as the respect they have for VIAF.

This year’s prize winner was eighteen-year-old pianist, Olaf Andreas Strand, an incredibly talented musician who can safely look forward to an illustrious career.  His is a wonderfully poetic tone that is both assertive and warm, seductive for all the right reasons, and the pieces he chose to perform were admirably suited both in style and temperament to the beauty of his playing.  To open his recital, Olaf chose Bach’s very well-known Italian Concert BWV971.  In its ordering of movements, the work follows the standard Baroque concerto pattern, in which a central slow movement (Andante) is framed by two faster ones.  Only in the central movement does the music take the form of a highly ornamented melody line for the right hand heard above a straightforward chordal accompaniment. Remarkably, however, the left hand part (in thirds) actually takes up the main melody of the brilliant opening movement (without tempo marking), already remarkable for its élan and bravura craftsmanship and for the way in which the music echoes contemporary orchestral technique so masterfully.  The tonal scheme of the Presto finale is very simple, hardly veering away from tonic and dominant harmonies.  As performed by Olaf Strand, the payoff here, however, was the tremendous vitality and dynamism of the music, based on nothing more complex than an F major ascending scale from which Bach crafted his essential materials.  As one would expect from a master contrapuntist, the theme was heard in augmentation and diminution, in inversion and contrary motion, and indeed in a whole panoply of spectacular concatenations that left the listener marvelling by the close at the fact that this is a work for just one player, two hands, and two manuals!  Olaf Strand gave a distinctly memorable performance, one that belied his youth and attested to this young pianist’s maturity and musicianship.  Given the wide array of colour, the pianist was however very careful not to make of this work a romantic one, and the balance between the Baroque ‘chiaro/scuro’ effect was admirably maintained.

Next came another magnificent work, namely, Beethoven’s Sonata no. 31 in Ab Major op. 110.  This monumental work , although sometimes overshadowed by the mighty Hammerklavier Sonata, and the last, the C minor op. 111, seems quite as impressive as these better-known works.  It is an unusual piece; thematically threadbare at the outset, it is a great and deeply profound composition, whose fugal finale achieves the highest keyboard art.  This composition opened with a gentle, slow idea of strong spiritual character, the music sounding mesmeric, tranquil, chorale-like, intimate.  Its fabric consisted of many threads, but on the surface there was little of actual substance, at least from the standpoint of musical analysis.  Yet, this lovely but seemingly unpromising opening contained the seeds of this movement’s rich thematic and harmonic material.  The latter half of the first subject was borrowed from the Largo second movement of Haydn’s Symphony no. 88 in G major.  At the time, Beethoven was writing this Sonata, he was suffering the first bouts of the illness that would take his life six years later.  The serene, rather valedictory mood of the first movement (Moderato cantabile, molto espressivo) may reflect his sense of mortality, of an impending doom. The second subject is lively, but in all its elements seems to be on the descent, expressing, perhaps the end of a journey. The development introduced some tension and subtly disrupted the serenity, without, however, essentially altering the general mood of tranquillity.

The second movement (Allegro molto) is short and jovial.  Or is it?  It certainly started off with a happy demeanor, but that temperament was periodically interrupted by a ponderous ritardando, which finally overtook the direction and character of the piece. The third movement, marked Adagio ma non troppo, was sombre, bordering on the funereal. This ponderous, dark music may reflect the composer’s deepest doubts and disappointments.  The finale began without pause after the Adagio.  Its theme, almost Bach-like in its contentedness and fugal character, sounded serene, expressing, perhaps, the composer’s acceptance of his fate.  This was a movement of great subtlety and beauty, and its structure was masterful and original.  The middle section was quiet and dark, its mood looking back to the darkness of the Adagio.  Suddenly, the piano unleashed ten fateful chords in a slow crescendo.  The main theme then reappeared and struggled for a time with the dominant mood of darkness.  Eventually it gained strength, transforming the movement into a triumphant, ecstatic, radiant utterance.

For a pianist this young one may forgive him if, intellectually, he did not quite match up to the demands of such a cerebral work.  However, Olaf Strand got the register just right and the interpretation he gave manifested an intelligence that went far below the surface meaning of the text.

The last two items on the programme were two of Chopin’s best-loved works: indeed, the entire programme consisted of pieces that are staple on a recital programme.  The first Chopin work was Prelude in C# Minor op. 45.  This last Prelude began with a gentle, melancholy theme, whose mostly ascending accompaniment Chopin deftly works into the gloomy melodic fabric.  That is nothing new for him, but here the obsessive and seemingly simple manner of the harmony never became tiring, always remaining profoundly atmospheric, largely because of the composer’s manipulation of his thematic material, at times allowing sunlight to break in, as when the theme is played for the second time and blossoms into hopeful joy.  Indeed, the success of this whole piece rested on the composer’s deft handling of what is essentially threadbare thematic material; there was no middle section here.  It is hardly surprising that this masterpiece is one of Chopin’s more popular and widely-played compositions.

The final work was the much-loved Ballade no. 4 in F Minor op. 52.  Deemed a tour de force for any established pianist, one could not but be profoundly impressed by Olaf Strand’s interpretation, mastery of technical difficulties (of which there are plenty) and the beauty of the singing tone he employed.  So palpable was the dramatic feeling and flow of this Ballade that it was impossible to listen to the work without wondering what it is about.  That two great characters, or forces, came into a conflict in which both are finally destroyed was clear, but because it is pure music, the mystery remained intact.  If one definition of a great creative artist is the possession of the tragic vision of life and the ability to express that vision, then the mighty vision that is the Ballade in F Minor is proof, unequivocally and unarguably, of Chopin’s tragic vision and of his transcendent greatness as a creator.  That is what the privileged listener felt at the end of a truly memorable performance, one that could easily be heard at venues such as the Wigmore Hall in London. 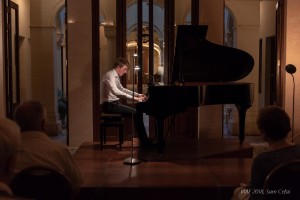 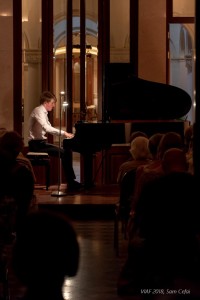 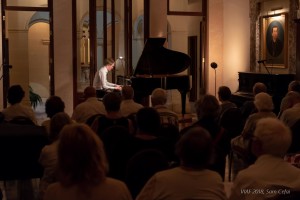