David Campignon, a Japanese who lives in Paris, regaled a large audience with an eclectic programme that lasted above 90 mins. Establishing his virtuosity with four of Debussy’s most well-known Preludes, the recital started off with a flourish, the energy of which did not waver until the very last note of the Schubert Sonata that was performed last.

Brouillards (Mists) is quietly teeming, delicate, and atmospheric, the texture is dominated by sweeping arpeggios that require a high degree of control on the part of the pianist. Harmonically, the work is quite advanced, with a strong suggestion of polytonality. La puerta del vino (The Gateway of Wine), one of the most effective Préludes of the set, this Spanish-inflected work has the rhythm of a habanera throughout. Debussy liked Spanish music, often composing works exhibiting elements of that nationalist style. Ibéria, the second of the three orchestral Images, is one of several examples divulging this tendency. La Puerta del Vino is another, but it goes deeper than just evocations of Spanish musical styles, expressing the conflicting elements of love and violence as revealed by the composer. Still, the music is mostly light, its inspiration coming from an image on a postcard sent by Manuel de Falla to Debussy that depicted the Alhambra Gateway in Granada, the gate referenced in the work’s title. Despite the composer’s comments about violence in this piece, most listeners will hear its music as exotic and seductive, nocturnal and mysterious. This is a habañera, whose infectious rhythmic manner and thematic workings in the middle register and bass impart a sensual character to the piece. In the middle section, the music briefly takes on an epic character, but then returns to the more subdued manner from earlier. The insistent, mostly lethargic rhythm often suggests sinister elements, especially in that grandiose passage in the middle section. In Ondine, Debussy depicts the legendary water sprite with a subtly changing atmosphere, as in the previous Prélude, La terrasse des audiences du clair de lune. Typical water-like arpeggiated figuration alternates with scherzando outbursts. Its inspiration, like Les fées sont d’exquises danseuses (the fourth in Book II), was an illustration by Arthur Rackham. In this case, the composer saw it in a translation of de la Motte Fouqué’s Undine. The story, of course, concerns a water nymph whose deadly powers prove lethal to the mortal who betrays her love. Ravel had depicted this same fairy tale in the second movement of his piano work Gaspard de la nuit, but in a much more elaborate and complex manner. Some have suggested that Debussy’s comparatively simple effort here was a reaction to Ravel’s, perhaps in an attempt to vie with or outdo it with a lesser arsenal of expressive means. Whatever the speculation, the work is typically Debussyean. It opens in an ethereal mood, but quickly turns playful and whimsical, with notes jumping about and swirling. A lively theme having an arch-like shape in its main subject is then presented. Soon, the music mixes dark with playful elements and gradually develops a sense of tension, although never quite shedding its ethereal cast. The work closes in playful waves and swirls of notes. The last Prélude performed this evening is Feux d’artifice (Fireworks), incidentally, also the last of Debussy’s Préludes. It is a musical portrait of a fireworks display over Paris. Brilliant arpeggios, trills, and rapid chord passages characterize this, the most technically challenging of the Préludes. The work came to an effective close with a distant quote of La Marseillaise sounded over a hushed tremolo.

Rachmaninov’s Prelude in Bb Major op.23 no.2 came next. This is a brilliant, if somewhat overstated work, utilising a wide variety of technical devices. A sonorous right-hand chordal melody is accompanied by sweeping left-hand arpeggios. The lyrical central section reverses the hands’ roles by placing the melody in the left hand while the right hand plays rapid broken-chord figurations. An exciting transition leads to the reprise and final fortissimo peroration. Campignon injected the right dose of passion into his interpretation, without which no Rachmaninov work could possibly take off!

Scarlattis’ two Sonatas for the evening, namely, L424 (D Major) and L442 (D Minor) provided a much welcome respite after the emotionally demanding Debussy and Rachmaninov. These were performed in style and one was impressed with the easy transition that Campignon made from the heavy-handedness of the previous work to this one. Chopin’s two major works featured next. These were his Barcarolle op.60 and the Andante spianato e Grande Polonaise op.22. Here, Campignon came across as a formidable pianist, the technical powers and abilities of whom are undisputed. Barcarolle is lushly Romantic throughout, both in musical style and in emotional temperament. The main theme, heard over a gentle swaying rhythm, exudes a brightness, an almost ecstatic glow in its long-breathed character and angular shape, fluttering here and turning charmingly demure there, then welling up with sweet passion before descending so elegantly. A sense of passion grows in the middle section build-up, too, but the music seems constrained here from reaching the ecstatic outpourings it alludes to until the return of the main theme, which first appears in a somewhat varied form and is played at a livelier tempo. After a reprise of it in its original guise, it reappears as the variant and leads to a passionate climax of great beauty. A lovely, playful coda closes out this masterpiece. The Andante spianato begins with a lovely theme in the upper register, clearly of a Romantic bent. Like many of the composer’s creations, there is something sad in its beauty, which to some will always represent the exiled Chopin’s homesickness for his country and family. A consoling, mellow theme is next heard and after recalling some of the main material, this section ends quietly. The musically-unusual word spianato (level, or smoothed) give an idea of the music’s tone. The Grand Polonaise begins with a fanfare and then launches into one of the composer’s more attractive dance themes. It is light and delicate, joyful and characteristically aristocratic, and full of the colour and subtlety one associates with so many of Chopin’s polonaises. Upon restatement, the theme is given more ornamentation and glitter. In its middle section, the mood turns playful at the outset, but then becomes more intimate and subdued while retaining its dance-like character. Some passages here resemble parts of the first movement of the composer’s Piano Concerto no.1 (1830). The main theme returns and the piece concludes with a brilliant coda.

After such an intellectually and emotionally demanding run of works, came the proverbial cherry in the shape of Schubert’s massive Sonata in A Minor D959. This is Schubert’s penultimate piano sonata, written in September 1828, about three months before his death. It is one of three that he wrote after the death of Beethoven (March 19, 1827), whose funeral he attended with Hummel. The passing of this great master was an important event in the life of Schubert, for, although he mourned the loss of the musician he greatly admired, he also perhaps felt somewhat liberated from the older composer’s dominance. Appropriately, each of these last three piano sonatas contain stylistic nods to Beethoven; in the case of this A major sonata, the Rondo is based on the finale (also a Rondo) of Beethoven’s Sonata no.16 in G major.

The work opens with dramatic, stately chords which yield to gentler music, using the same material. The second subject is particularly lovely in its lyrical warmth and passion. The development offers both playfulness and tension, and the coda is grand and complex. Many take the view that the ensuing Andantino, although it is not the longest or grandest of the four panels here, is the most profound. Its mesmerizing main theme is dreamy and mysterious, but often seeming on the verge of erupting into a storm. The second subject introduces a great deal of tension, eventually leading to a dramatic climax. This movement seems to pit serenity and violence, or even reason and madness, against one another. The Scherzo is delightful in its lightness and good spirits. Yet, for all the effervescence here, there is considerable craftsmanship: the arpeggiated chords appearing at the outset are a variant of the somewhat sinister ones at the end of the Andantino. The Finale, as mentioned above, pays tribute to Beethoven; yet, the only truly imitative element is Schubert’s borrowing of a theme from the slow movement of his own A minor Piano Sonata, D.537.

This was yet another massive recital which attests to the seriousness of the organisation in getting world-class performers for the Victoria International Arts Festival! 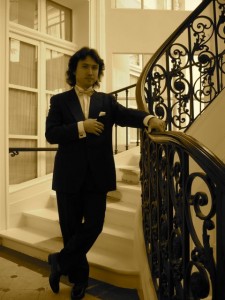