VIAF is privileged to have hosted not one but two wind quintets in just under a week. First it was the Malta-based Cosmos, who regaled an enthusiastic audience with some wonderful playing, and on Saturday it was the Paris-based Anemos, who performed in St George’s Basilica to yet another highly-appreciative audience.

Making a bold statement with their chosen opening piece, namely, Darius Milhaud’s Cheminé du Roi René, the quintet immediately established an immaculate rapport, with their sonorous tones filling every nook and cranny of the Basilica. This work does not fall easy on the unpractised ear, but it was immensely well-received. It is a seven-movement work, with each movement easing into the next seamlessly. The mood of La Cheminée du Roi René is largely similar from movement to movement and comprehensively the work was delivered in a most charming and stylized way.  For instance, La Maousinglade with its gentle, swaying oboe-driven Sarabande, stuck in the memory long after it was heard. There was a hint of Renaissance-styled ornamentation in Joutes sur L’Arc, and a hint of the hunting-horn could also be discerned in Chasse à Valabre; towards the end of this movement there was a short passage of Milhaud’s bi-tonal thorniness thrown in for comic relief between the clarinet and bassoon.  The pensive and strongly Neo-Classical Madrigal brought this short Suite to a quiet and restful close.

Mostly known for his richly descriptive symphonic poems Fontane di Roma (‘The Fountains of Rome’) and Pini di Roma (‘The Pines of Rome’), Ottorino Respighi was a versatile composer who translated into music powerful visual experiences and feelings of deep attachment to cherished places. What was particularly notable in the work performed during the evening by Anemos, namely, the two-movement Quintet in G Minor was its openness to hints and echoes from a variety of sources, as if Respighi were trying out different idioms as he looked for his own path to follow.  In this sense, the opening Allegro was almost experimental in mood, and it is due to the composer’s wonderful spontaneity which is underscored by a taut logic that the piece does not risk falling apart, such are the multiple levels of montage he seems to imbue his movement with.  The second movement, Andante con variazioni, is more tightly-knit in that a beautiful theme was sounded upon which, then, a series of variations is construed.  Here one could detect the discernible influence of German Post-Romanticism (ideas learned from Torchi and Martucci, and from Bruch, with whom Respighi studied while in Berlin in 1902); hints of the eastern breezes whose air he had breathed during his years in Russia; and, above all, figures and forms of expression borrowed from the French school, from Franck to Fauré, and on again to Debussy.  Comprehensively, this was one beautifully-executed piece by Anemos.

Scored for flute, oboe, clarinet, horn and bassoon, Jacques Ibert’s Three Short Pieces consist of two lively romps flanking a twenty-six measure movement, a duet for clarinet and bassoon, except for the final few measures; reminiscent of a Bach Two-Part Invention. There was style a-plenty here, and a refined taste, and a conscious attempt by the ensemble to engage in easeful play never degenerated into either flippancy or vulgarity.  Next came Alfredo Casella’s Pupazzetti op. 27, originally scored for piano duet but later arranged for many different combinations of instruments, including an orchestral version.  Given the puppet-oriented subject matter of this work and its frequent focus on snappy, firmly punctuated rhythms, it is probably safe to say that Stravinsky’s ballet Petrushka is among its immediate predecessors.  Anemos carried this through with verve and panache, and notable contributions came from the oboe and the bassoon.

Farkas’s Five Ancient Hungarian Dances was the last item on a delightful programme of music.  In this work, the Hungarian composer Ferenc Farkas deliberately set about creating a group of five pieces in the Hungarian Biedermeier style; and although he wrote that “this pasticcio is never ironic,” a good-humoured twinkle in the composer’s eye cannot be ignored.  Several arrangements exist, and at least half a dozen recordings of it are currently available.  Here, the composer plays it straight, although the last piece, a Saltarello, sports some delightfully droll touches in ornamentation and accompaniment.  Anemos  interpreted the work with gusto, attention to style, and dynamic intensity.  It is interesting to note that both this work and Ibert’s Three Short Pieces had also been performed by Cosmos a week earlier and it is testament to the two very different but equally brilliant ensembles that these two works were given entirely diverse but equally valid interpretations!

A very warm applause greeted the ending of the Farkas piece and Anemos very generously regaled the audience with the devilishly-difficult arrangement of Rossini’s Overture to Barbiere di Siviglia, a pièce de resitance if ever there was one.  It was certainly the most difficult piece, technically, of the whole evening, one that exhilarated the audience whose prolonged applause was a genuine show of appreciation of a truly exciting concert! 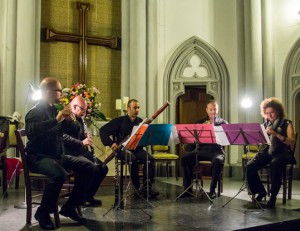