Anemos Wind Quintet is made up of musicians who are soloists in their own right. Filippo Mazzoli is first flautist with the Orchestra del Teatro Reggio, Parma, and he has worked closely with such giants as Riccardo Muti, Lorin Maazel, Yuri Temirkanov, and others. He has performed as soloist with the Deutsche Kammervistuosen, Mainz, Cameristi di New York, and L’Orchestra da Camera di Ravenna, amongst others. He has many CDs and DVDs to his credit, published with Decca, Diapason, Tactus, Naxus, and more. Oboist Marika Lombardi’s brilliant solo career took off in 1988, when she left Italy for Paris.  There, she acquired various and diverse experiences and prizes in a few of the more prestigious academies, most notably, the Conservatoire National de Région de St Maur, Ecole Nationale de Musique de Montreuil, Ville de Paris, and others.  Since 1992, she has been teaching Oboe at the Conservatoire Municipal du Centre, Paris, and also at the national schools in Pantin and Chantilly, apart from other teaching commitments at the CRR d’Aubervilliers and at the Schola Cantorum.  She has conducted master classes at New York University and has numerous recordings to her credit.  Marika plays a Howarth-London oboe.  Nicola Zuccalà is one of Italy’s foremost clarinettists and is in great demand both as a soloist and chamber music player.  He has performed with a few of the best-known chamber music ensembles, namely, Harmonie Ensemble, Tactus Ensemble, Nuove Sincronie, Icarus Ensemble, Angelicum di Milano, and many more.  He has also performed with such legendary conductors as Carlo Maria Giulini, Sir Neville Mariner, Umberto Benedetti Michelangeli, and composers amongst whom one finds Franco Donatoni, Luciano Berio, and Giacomo Manzoni.  Performances have taken him all over Europe and Africa.  Nicola is equally adept at performing jazz, and recordings include collaboration with Rugginenti, BMG, and Fonit Cetra.  Ivan Calestani has won many awards for his performances on the Bassoon, and has played with the prestigious Orchestra Filarmonica Toscanini under the direction of Lorin Maazel, Orchestra ‘Haydn’, Orchestra ‘Verdi’, Orchestra Sinfonica del Friuli Venezia Giulia, Teatro Regio di Parmo, Divertimento Ensemble, and Österreichische Philarmonie, amongst others.  He has been regularly invited as guest performer with L’Orchestra della Svizzera Italiana, and currently plays with the Tonkünstler Niederösterreich, Wiener Konzertverein, Haydn Akademie, and the Grosse Ricreation, all of them in Austria.  Albin Lebossé is both musician and academic, and the recipient of numerous international prizes.  As a soloist, he participates regularly in famous Festivals, such as the Lucerne and the Aix-en-Provence.  He has also occupied prestigious positions performing on the Horn with the Mahler Chamber Orchestra.  Currently he is a member of the Orchestre de l’Air, Paris, and since 2002 he has been teaching the Horn at Antony, Paris.  He is much in demand with the Orchestre national de l’opéra, Paris, and the famous Ensemble Intercontemporain under the direction of Pierre Boulez and Sir Colin Davis.  He has numerous CDs to his credit and forms part of chamber ensembles that specialise in contemporary music, namely, Ensemble Amalgammes and Ensemble Laboratorium. 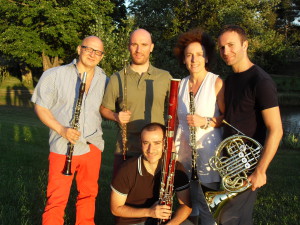