Musica Poetica London are an extraordinary group of top-notch young musicians from London. They specialise in Baroque music and their professional attitude, together with their undoubted musical excellence, are a guarantee for success.  They have performed in the Victoria International Arts Festival for the past few years and their concerts are always such a joy, not only from the aesthetic side (of which there’s plenty), but also because they research their programmes meticulously and the level of academic/musical interest with which they engage when putting a programme together is nothing short of impressive.

The ensemble, this year consisting of Christopher Webb (Bass), Kate Conway (Viola da Gamba, affectionately known as George Gamba), and Oliver John Ruthven (known as O-J to his friends), got together to devise a programme concentrated on what Samuel Pepys the diarist had labelled “that stupendous bass”.  Pepys was referring to the Reverend John Gostling, who he had heard in a performance, prompting the diarist to call the Rev Gostling “that stupendous bass”.

Musica Poetica London carried out intensive research on the topic, and the programme they presented on Thursday attested to the care and attention (and devotion, I should add) they gave to the initiative.  In Chris Webb they certainly had the jewel in the crown, as it were, and there was no doubt that he indeed is “that stupendous bass”.  Such a pleasure it was to hear him sing effortlessly, with so much style and composure, such impeccable diction that one could easily get the gist of the jokes he was singing about, and such musicality, too.  A blessing, really, on a day that proved to be so calamitous to the UK and the rest of us.

The concert basically consisted of English Baroque works, ranging from Purcell, to Jeffreys and Simpson, on to Blow and more Purcell, Locke and, finally, Leveridge.  The ensemble opted to present their programme in a lively and intimate way, with each of the three musicians reading excerpts and giving short but informative explanations about each work.  Purcell’s Begin the Song aptly started the concert.  The Bass announced the first lines off-stage, as it were, with his voice carrying easily, projecting itself with its full-rounded timbre.  This aria is set to the lyrics of Abraham Cowley, who was the leading poet of his time.  There is much word-painting here, Purcell-style, in that while it prompts a graphic image it is devoid of direct representation so that the listener is not alienated from the beauty of the music at any point.  This work was followed by two songs from George Jeffrey’s Three Devotional Songs.  Here, Chris Webb changed the style with ease and poise.  The devotional/contemplative mood of these songs was beautifully captured.  The first song, Praise the Lord, O my Soule, is structured on a beautifully-wrought melodic line that depended on Chris Webb’s legato phrasing and his warm timbre.  O Quam Suave appealed to the deep emotions and low tessitura of the bass voice.  The work is implicitly divided into two sections.  The first part is deeply religious and profound and although it makes use of a few embellishments, the texture is clear and unencumbered.  The second part is in a major mode and is happy and exhilarating in mood and tone.  The melodic line becomes more mellifluous and melismatic, technical difficulties that Webb had no problem overcoming.

Next came Simpson’s Division on a Ground in E Minor, one of the most technically-difficult pieces in the repertoire of the viola da gamba.  The work presents a simple theme with variations on it.  It is a formidable piece and attests to the virtuosity and dynamic range of the instrument, as well as to the undoubted capabilities of the performer, in this case, Kate Conway.  There is an improvisatory feel to the music that is both exciting and fresh-sounding.  This work was impeccably interpreted by Kate and Oliver John (and George, one should say!)

John Blow’s Rise, mighty Monarch, is a testament to the overwrought, hyperbolic mood that took hold of the English imagination on the advent of the restoration of the monarchy in 1660.  Indeed, retrospectively, there has always been an indelible link forged between literature, history, and politics in England.  Monarchs (like Popes) have always been great patrons of the arts, whatever they did on the side, and for this alone they deserve the ultimate prize of the high heavens.  Charles II was one such patron, and the commissions he gave to the best musicians around him (as well as painters and poets) attests a continuing tradition dating back from the Plantaganet monarchs, one that embraces high culture, one that deplores mediocrity and philistinism in whatever shape those monsters appears, one that kings, queens, and more wanted the entire nation to enjoy.  This glorious aria by John Blow is appropriately cheerful and lively, eschewing counterpoint, but with plenty of the straightforward rhythm King Charles II was known to have favoured, including a brisk ‘alla breve’ trio on the words “See how our troubles vanish”.  The pervasive lilt of the greater part of the work is relieved by a rhetorical declamation for the bass, culminating in a fine flourish from E above middle C to D two octaves and a tone below on the words “Nor lagg’d ingloriously behind”.  The musical accompaniment provided a competent opening sinfonia and kept spirits up with five ritornelli between vocal movements.  It is a formidable aria for the bass and once again Chris Webb rose appropriately to deliver an interpretation that was vigorous, robust, and assured.

Next came two more Purcell arias, namely, Anacreon’s Defeat, and Hence with your trifling deity.  Purcell wrote only two secular songs for bass solo, one of which is Anacreon’s Defeat.  Referring to Homer’s Iliad, once again showing what an ‘epic’ age the English were living at the time, the aria is a most difficult one, changing colour and mood according to the demands of the text.  The “Theban jars” which the lively, dotted opening mentions, are the wars of Thebes, and the “rattling numbers”, which Purcell set to a lively, dotted roulade that rose rhythmically up the vocal scale, referred to classical poetic metre.  “Whilst I, in soft and humble verse” is a contrast in metre, key and style, lyrical and somewhat regretful; this particular defeat of Anacreon, as we later learn, was not a military one.  The third section returned to a blustering, military style as we learn that it is not “fleets at sea”, nor “ranks and files of infantry” that have vanquished the poet, and Purcell provided further characterisation for the confident warrior by adding repeated cries of “No, no, no, no”.  Only in the last bars, as the tempo and style radically changed, did we hear that it was not even “All your artillery companies” that had caused defeat; it was those “encamp’d in killing eyes” (that is, the looks – and worse – of ladies).  The overt sexual overtones of the last line (“Each dart his mistress shoots, he dies”) left little to the imagination.  Hence with your trifling deity is a short yet intense piece.  After a very short introduction on the continuo, the vocal line started in a declamatory fashion on the words ‘Hence, hence’.  The writing for the voice is robust and assertive, with runs and skips.  A slower middle section, which was almost recitative-like changed the mood to introspective.  This was soon dispelled with, however, and the music recaptured the vigour of the introduction, to bring this short but sparkling aria to a definite close.

Oliver John Ruthven is a master harpsichordist, sensitive but never sentimental in his interpretations, understated and deep at the same time.  Suite in C Major is the first in a series of Suites that Locke composed, and which comes from his monumental work Melothesia.  Comprised of a group of dance forms, alternating the rippling notes of a Courante with the stately composure of a Sarabande, for instance, the work is evidence of the multi-cultural influences that pervaded England at the time.  Brought together in a unified whole it also attests to the principle of unity-in-diversity that the great master of Baroque music, J.S. Bach, advocated and, poignantly, one that Chris Webb referred to when he spoke about the work as being the principle of the European Union.  In fact, the ensemble was, like the rest of us, apprehensive at what might be the result of the referendum that Great Britain was voting for all that day, and their plea was for an understanding that cultural diversity can only contribute to a more stable whole. Certainly, all this must have been in O-J’s heart and mind when he interpreted this very beautiful work.  His controlled, velvety touch, mesmerising technique, and musical understanding of the work all came together to give the audience a lesson in self-discipline, self-expression, and the glorification of all that is beautiful.  A humbling performance, indeed!

Last on the programme were four songs from Richard Leveridge’s Five Comical Songs. Richard Leveridge was an English bass singer of the London stage, and a composer of Baroque music, including many popular songs.  He wrote a considerable number of songs, which exploit the firm and powerful bass voice (he himself was a formidable bass), and several of these songs became popular favourites, as the choice for this evening’s performance attests.  The humour of his songs, and indeed of his conversation, consisted in exhortations to despise riches and the means of attaining them; to drown care by drinking; to enjoy the present hour, and to set reflection and death at defiance.  With such a disposition as this, Leveridge could not fail to be a welcome visitor at all clubs and assemblies, where the avowed purpose of meeting was an oblivion of care; and being ever ready to contribute to the promotion of social mirth, he made himself many friends, from whose bounty he derived all the comforts that in an extreme old age he was capable of enjoying.  Once again, Chris Webb (and the ensemble) gave a hearty, warm, and wonderful interpretation of these four miniatures.

The audience erupted in a thundering applause at the end of the last notes.  The musicianship, expertise, warmth, and a sense of well-being that Musica Poetica London transmitted throughout this lovely performance stayed with us for a long time, even after the bitter realisation that the world outside is not as orderly as one would have it!  But, as Chris, Oliver, and Kate said at the end, whatever may come, we have to continue doing this.  And we all say, yes, let’s have more and more of it.  “Beauty will save the world”, to use the words of Dostoevsky. 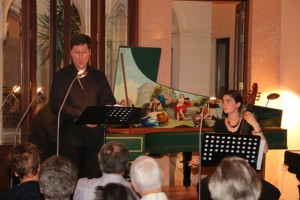 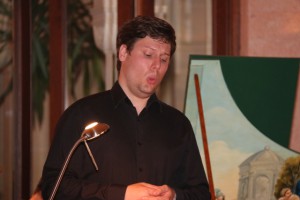 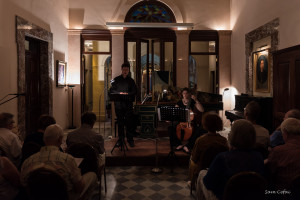 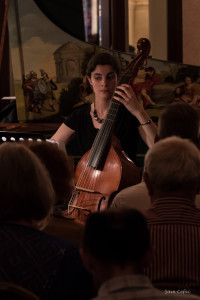 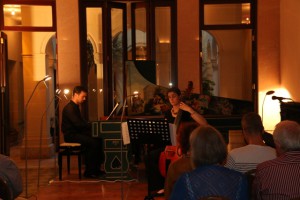 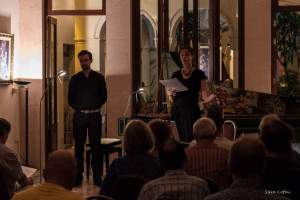 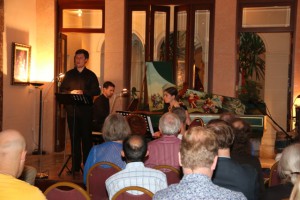 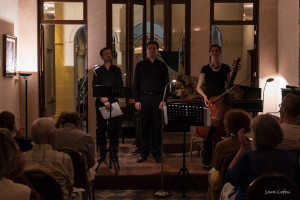 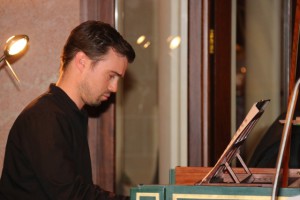 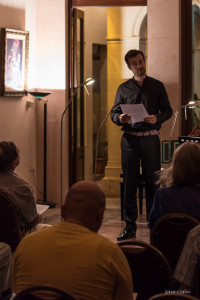 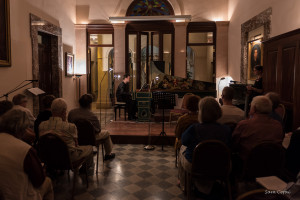