Yesterday evening marked the last concert, before the Grand Orchestral one this evening, of this year’s 15th edition of the Victoria International Arts Festival. One of London’s foremost vocal ensembles, Cantum Barbum, gave an outstanding performance of 16th and 17th century vocal works, ranging from Monteverdi right down to Purcell and Boyce. This performance was characterised by polished tones, impeccable intonation, exquisite phrasing and musicality a-plenty. Comprised of Counter Tenor Alastair Ross, Tenor Matthew Howard, Bass Edmund Saddington and Oliver-John Ruthven on the Harpsichord, the quartet reached dizzy heights of excellence in all the works they sang.

Starting with plainchant on the words of the Salve Regina, the ensemble immediately showed the cohesiveness of their performance and the sensitivity of their interpretation. Italian Baroque was represented in Monteverdi’s setting of the Salve Regina, ‘S’ei vostro cor Madonna’ and ‘Di far sempre gioire’, in Lotti’s ‘Funerale della speranza’ and ‘Inganni dell’umanita’, and Caldara’s ‘Laboravi in gemitu meo’, while English Baroque was superbly exemplified in Locke’s ‘In the beginning’, ‘O Lord, hear my prayer’ and ‘Let God arise’, in Purcell’s wonderful motets ‘In God’s world will I rejoice’, ‘Lord, not unto us’, and ‘O remember not’, and in Boyce’s ‘The Lord is King’.

Throughout, the different textures of the voices blended easily and impressively, with Alastair Ross’s very fine high counter tenor, Matthew Howard’s warm tenor and Edmund’s resounding bass. The ensemble had no problem whatsoever tackling the very difficult Baroque melismas, being very articulate in the semiquaver runs and equally accomplished in the dissonances of the 7th and the many appoggiaturas that characterise such motets.

Oliver-John Ruthven was a very fine accompanist and he also displayed his serious talent when he performed Lotti’s Capriccio for harpsichord solo. In all, this was a truly high-powered performance and we look forward to more! 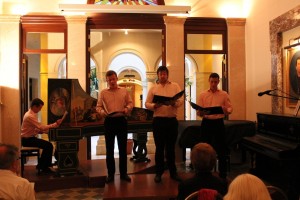 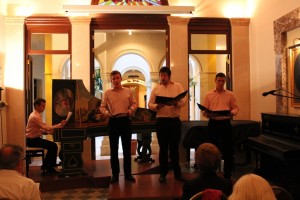 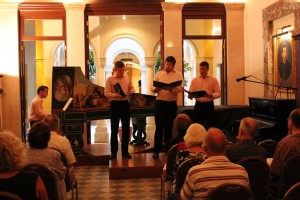