Argotti Ensemble is no newcomer to the Victoria International Arts Festival. Theirs is an unusual combination in that it comprises 2 violins, horn, and pianoforte. This makes for an interesting sound yet the downside to such an formation is the dearth of repertoire they are faced with when putting a programme together. It takes some hard thinking, clever planning, and intelligent co-ordination to prevent a programme from falling apart – and Argotti has these qualities in abundance!

Theirs was a most varied and exciting programme, featuring duets, trios, and even a quartet at the end. Throughout, pianist Gisèle Grima proved a formidable accompanist, steady, assured, and confident, adapting easily to the different styles demanded of the very different pieces presented. The concert started with Johann Friedrich Fasch’s Trio in G Major for 2 Violins and Continuo, an example of some very fine Baroque writing. It is a two-movement work, which opened with an Adagio movement, stately in tone and style. The writing, although polyphonic in texture, remained clear and did not engage in the more contrapuntal density that the second movement, an Allegro, got involved with. There was liveliness and panache here, and a certain element of virtuosity on the strings. The final movement, another Adagio, did not quite capture the formal dignity of the first movement, but nonetheless it attested to the grandiose style that is so part and parcel of eighteenth-century manners. The two violinists, Maria Conrad and Nemanja Ljubinkovich, are two very different players but this was not a deterrent from creating a most cohesive and unified texture, with all the Baroque qualities of antiphonal effects and echoes beautifully executed.

In José García Gutiérrez we were privileged to have a most excellent and musical performer.  We had already heard him with the Cosmos Ensemble barely a week earlier, and it was a blessing having him again with us.  He gave an extraordinarily moving interpretation of Humperdinck’s ‘Abendsegen’ (‘Evening Benediction’) from Act 2 of his very well-known opera Hänsel und Gretel.  Originally scored for two female voices which develops into a two-part female chorus, it is hard to imagine that the original could be bettered: José came very very close … the singing quality, profound depth of feeling which was, however, never sentimentalised, was truly commendable.  This was again the case with the second piece he performed, namely, Nielsen’s Canto serioso.  It was more of a duo rather than a solo with piano accompaniment.  The writing is contrapuntal in texture and although there does not appear to be a definite tonal basis, the work is tonal rather than atonal.  It required virtuosity and attention to technical detail on the part of the horn, with the writing extending to both ends of the tonal and dynamic spectrum.  The work had a singing quality to it that was beautiful and romantic.

José García Gutiérrez gave another two pieces, Glazunov’s Rêverie op. 24, and Saint-Saëns Romance op. 67.  The former is a work based on a lovely melodic line on the Horn.  It fully exploited the dynamic and tonal range of the instrument, testing the performer’s technique with its extremely low register, a technical difficulty that the performer overcame with confidence and assurance.  It was interpreted very beautifully, fully bringing out its reflective and contemplative mood and colour. The formal structure of Saint-Saëns Romance is in ternary form, resembling a da capo aria, in that the final section was a near-literal return to the first.  Considering the brevity of the piece, the main theme was rather long.  It fell into two sections, both of which shared the opening arching eighth note figure and a dotted idea, and, indeed, the entire rhythmic pattern.  The more animated central section, marked by a wide dynamic range, developed fragments of the main theme, most notably the opening eighth note figure.  Throughout the Romance, the pianoforte was clearly subordinate to the horn, providing support for the melody.

In between the horn pieces, the two violinists gave a most charming rendering of Kämmerer’s Ländler for 2 Violins and Pianoforte and Ames’ Canzonetta.  In themselves, these are unremarkable pieces, but the stylised rendering given to the works by Maria and Nemanja endowed them with a level of sophistication that would have otherwise been impossible to capture.  The penultimate piece on the programme was Hermann Schroeder’s Momento Capriccioso for Violin, Horn, and Pianoforte, a rather short, one-movement piece marked Allegro con brio.  It had a modern feel to it, and the constant interaction among the three instruments gave it a clinical, almost mathematical structure.  The key is in E Minor and it started with a virtuosic, very short cadenza-style passage, proceeding to a faster più mosso section towards the end.  The work led to the final one, namely, the very difficult duo by Károly, namely, Grande Fantaisie for 2 Violins and Pianoforte.

This wonderful, brilliant Grande Fantaisie for two violins and pianoforte is a veritable tour de force for performers.  Starting with a lengthy introduction on the pianoforte, on a rippling tremolo hovering around the dominant of E Minor, the violins entered playing in thirds, starting at a slow tempo that increases to a fast-paced, passionate cadenza reminiscent of the Rhapsodies of Franz Liszt.  In fact, the entire work was imbued with the mysteriousness, colour, and volatile passion of gypsy music, skirting a minor key with outbursts of demonic fury counterbalanced by painful nostalgia in the slower sections.  Throughout, the two violins were constantly playing at the interval of a third or a sixth, coming across as two singing voices.  The pianoforte was most of the time providing harmonic accompaniment in a strong rhythmic pulse, but at moments it emerged with interludes that bridged one section and another.  The music alternated between very fast and slower episodes, depicting the fluctuating moods and unpredictability of the passions that is so characteristic of gypsy music.  The piece was replete with cadenzas that demanded extraordinary attention to detail and concentration in order for the music not to fall apart.  In fact, this is one of the dangers of such a piece, namely, that despite the seemingly loose form and ‘ad libitum’ style, there is a tight and taut structure that needs to be adhered to so that the piece would not fall into chaos. Towards the end, the music changed its mood from the dark brooding of E Minor to the exuberant revelry of E Major. The two violinists exhibited extraordinary control and co-ordination, apart from their undoubted technical mastery. There was style and mood in every note, and the spirit of the Czardas was beautifully captured and maintained throughout.

A rapturous applause greeted the end of this fiery work, and the audience only quieted down when the whole ensemble consented and gave a most ravishing rendering of Piazzolla’s Oblivion. 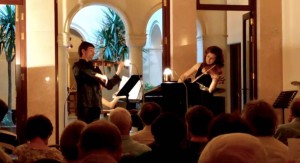 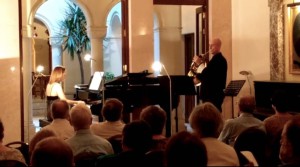 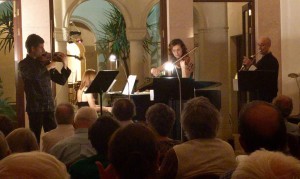