Wednesday 4th July saw the participation of Latvian soprano Alisa Zinovjeva and Italian pianist Christian Maggio in a highly-polished performance of Russian, French, Spanish, Latvian, German and Italian lieder. Alisa Zinovjeva showed her mastery of all six languages and she interpreted the different styles with ease, composure and confidence.

Three Russian songs by Dargomyzskij, Tchaikovsky and Rachmaninov were characterised by a dark tone that suited the melancholic texture and foreboding so typical of Slav music. Alisa endowed her interpretation with passion, depth and a wide range of dynamic power. Two charming Latvian songs followed. Sharing much of the passion with the Russian counterparts, the music of Dalsons and Medins offered a new vista on East European music. Although powerful and strong, they are, however, lighter in texture and there seems to be a bright side that is not shared by the likes of a Rachmaninov or a Tchaikovsky.

German lieder was represented by Richard Strauss. Alisa chose Die Nacht and Zueignung from his op.10. These were sang with aplomb, panache and power, with very clear diction and the right dose of dynamic intensity. Massenet’s wonderful Elegie was full of the pathos one associates with this hauntingly beautiful work. Elegant phrasing, mellow tones and a well-rounded texture marked the rendering of this song, which was very well received by the audience. Spanish was represented in Turina’s ‘El Fantasma’, a work bristling with passion, mystery and the uncanny, while Italian was sung in the soprano’s choice of Rossini’s ‘L’Invito’ and Valente’s ‘Passione’.

In between songs, Christian Maggio gave the soprano a much-needed respite by performing Debussy’s wonderful ‘Estampes’. Here, Christian showed his mettle as a fine soloist, delicate in touch and expressive in his interpretation. He was also a very sensitive accompanist throughout the performance. 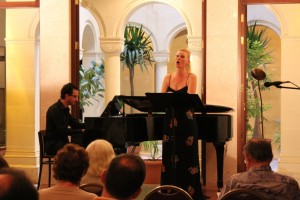 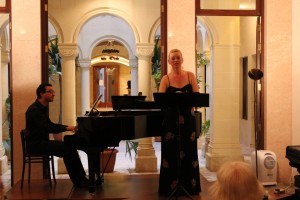 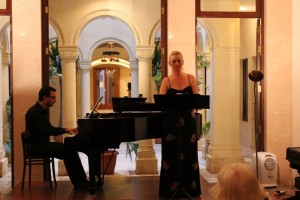