Guitarist Simon Schembri made a welcome return to our Festival, regaling a packed Basilica with a recital he gave, teaming up with two French musicians, namely, violinist Gilles Lefevre and cellist Gwendeline Lumaret.

Simon needs no introduction. He has firmly established himself as not only Malta’s leading guitarist but a musician of note. The finesse, elegance and warm tones of his guitar held the audience in thrall. This, coupled with Gilles’s supremely refined texture on the violin and Gwendeline’s wonderfully warm sound on the cello made this an evening one is not likely to forget in a hurry.

Starting with the first movement from Schubert’s lovely ‘Arpeggione’ Sonata for violoncello and guitar, the two musicians showed their mastery, both technically and interpretatively. The mellowness of the cello, together with the rippling brilliance of the guitar, rendered this work a rich and inimitable one. Schubert was followed by a work that could not be more different, namely, Piazzolla’s Histoire du Tango. Astor Piazzolla was keenly aware of the changing style of the Argentine national dance over his lifetime. It was entirely natural that he should seek to remind his critics and fans alike of the fact that tango had begun in the process of musical evolution and altered its sound and mood through that same process.

Histoire du Tango is the vehicle by which he did so. It is not written for the standard tango band, but is a kind of abstraction of that sound into a classical suite, originally written for flute and guitar. (There is also a version for violin and guitar, as well as other arrangements, and the work’s title is sometimes given in Spanish, La Historia del Tango.) The music is a little over 20 minutes long and covers the evolution of the dance through the twentieth century. Tango evolved from an earlier popular dance called the milonga, which is itself evolved from the Cuban rhythm known as habañera. Tango was initially regarded as a low dance. Like North American jazz, it originated in bordellos, and so the first movement is entitled Bordel 1900. As performed by Gilles Lefevre and Simon Schembri, the relatively genteel milonga was depicted here as having been jolted into a new form by a gentle dose of eroticism. The second movement is entitled Café 1930. By now, tango was the favourite dance of all classes in Argentina and was known as a daring dance around the world. Piazzolla is now writing directly from his memories of the type of tango played in cafés in Buenos Aires. This movement came across as a respectful depiction of the full-blown traditional tango.

The third movement, Nightclub 1960 evokes the precise time when Piazzolla returned to Buenos Aires after his efforts to create Jazz Tango in the U.S. It now becomes clear that Piazzolla is dealing in the overall composition with his own place in the history of the music, as more sophisticated jazz elements enliven a music that had become standardized and complacent. This is a picture of the early version of Tango Nuevo. The final movement is called Concert d’aujourd’hui, a title that most literally translates as Concert of Today. By the 1980s, Piazzolla was becoming an exciting voice in classical concert music. He shows himself here as having taken tango from its polite café form through its new nightclub dance form and making it into a new form for concert music. The harmonic vocabulary here is advanced and often startling, and it is music for listening more than dancing. Simon and Gilles gave a truly memorable performance of this wonderful work.

Jacques Ibert’s Entr’acte opened with a breathless, whirling dance with propulsive accompaniment, inspired by flamenco guitar music. The opening is then repeated after the briefest of pauses, the music vividly calling to mind a dancer as he or she improvises a variation on the theme. This image of an animated dancer, showing off his or her footwork, continues in the following serenade-like solo for the guitar. This, in turn, leads into a cadenza and a final, brief statement of the theme, ending, so obviously, with the dancer’s arms in the air and a final stamp of the feet.

Finally, the ensemble played as a Trio, performing Paganini’s demanding Trio in D Major. The magic and mystery of Paganini is evident in anything he writes. Whether it is the devilish Capriccios or the infinitely sweet Cantabile for Violin Solo, Paganini never fails to excite, disturb and pacify – all at one go. This wonderful Trio for violin, violoncello and guitar is structured in the four-movement classical style of Beethoven and Brahms. Starting with an Allegro con brio, this movement as performed during this recital, was characterised by a rhythmic drive that was almost relentless at times, pushing the boundaries to their limits without in any way detracting from the fragile beauty of the guitar, the mellowness of the violoncello or the sparkling tones of the violin, of which Paganini himself is the supreme master. The second movement, a Minuet and Trio – Allegro vivace, is a dance form which, however, Paganini instructs the players to refrain from playing too slowly or treat in a cumbersome way. In fact, he inserts the Allegro vivace after the Trio to indicate a fast tempo, anticipating any attempt by the performers to interpret it as the stately dance one associates with the Classical eighteenth century. The Andante larghetto came across as a superb example of a typical ‘Bellini’ bel canto movement. No-one beats the Italians on their home ground, namely, that of bel canto, and this is what Paganini endeavours to accomplish – to bring out the singing quality of the instruments. This movement was typified by rubato moments, emphasising the Italianate elements to the music’s advantage. There is a haunting, nocturnal feel to this movement that is so beautiful. Piquancy and charm are the hallmarks of the last movement, a Rondo – Allegretto. Contrapuntal writing and some contortionist movements for all three players, betraying Paganini’s penchant for difficult technical exercises, bring this wonderful Trio to a resounding close.

We hope to welcome Simon, Gilles and Gwendeline for more recitals of this high-calibre and sheer enjoyment! 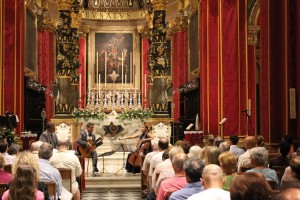 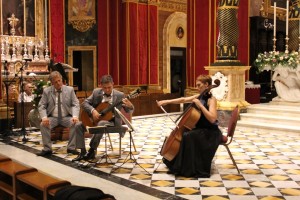 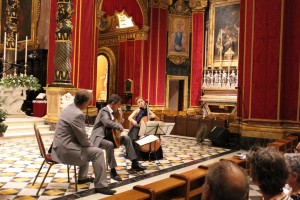