Yesterday evening, they performed an all-German Baroque music concert, featuring works by Telemann, Seyffert, Handel and Bach. The ensemble, which comprised of twelve musicians almost all of them members of the Malta Philharmonic Orchestra, acquitted themselves admirably in a concert that focused on the High and Late Baroque period in Germany.

Starting with a lovely Telemann work, namely, his Sinfonia in D Minor, the ensemble playing was throughout characterized by balance, understanding and dynamism. This was followed by a relatively unknown work by Seyffert, which proved to be a revelation for the highly appreciative audience. The Concerto for Oboe and Bassoon, performed by Claudia Verdelocco and Giacomo Cella respectively, was played with gusto, verve and panache. Worthy of mention are the two soloists who created a wonderful rapport between them and displayed both technical virtuosity and dynamic intensity, both in the faster movements and the more introspective middle movement.

Handel’s Concerto Grosso op. 6 no. 1 is one of a series of twelve dashing and elegant concerti grossi in which Handel explores kaleidoscopically shifting relationships among the instruments of a string orchestra. In consonance with the traditions of concerto grosso style he exploits the contrast between a small concertino (group of solo instruments) and a larger ripieno (orchestral complement). Throughout this cycle the concertino features two violins, a cello, and a chordal continuo instrument, and the ripieno comprises larger groups of violins and violas along with a continuo usually played by cellos, string basses, and one or several chordal instruments. Throughout, Kalypso Ensemble displayed their thorough understanding of the score and delivered this very charming work with what could be called a swagger (in the best sense of that word, of course!)

Bach’s Concerto in D Minor for Two Violins BWV1043 is one that is both formally perfect and dynamically very exciting. Although the texture is limited in that it is originally scored just for string ensemble, Bach being Bach manages to exude multiple shades and hues in the mesmerizing counterpoint he employs. The soloists were Klara Nazaj and Giulia Tavano and both displayed finesse and elegance in their interjections.

The main work of the evening was, undoubtedly, Bach’s massive Brandenburg Concerto in G Major no. 3 BWV1048. Scored for three violins, three violas, three violoncellos and bass together with continuo, this was one stunning performance. Exuberant, lavish and profound the performance gave evidence of true musicianship on the part of the performers.  Despite the differences in the concertino and the ripieno, it did seem that all performers were soloists in their own right and all members of the Kalypso Ensemble more than rose up to the demands of the occasion!

A long, merited applause greeted the end of the performance and the audience which packed St George’s Basilica were full of enthusiasm for more concerts of this kind! 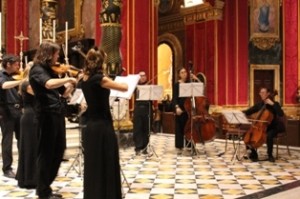 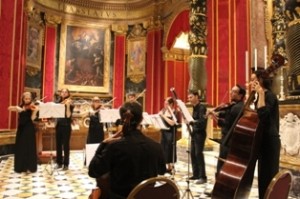