Pianoforte Duet Natascha Chircop and Marco Rivoltini need no introduction. We have had the honour of hosting this wonderful Pianoforte Duet a few times and with every performance they have proved themselves a formidable duo, regaling us with intelligent performances and diversity in the choice of programme.

The same augurs for this evening’s performance. Performing works by Debussy, Rachmaninov and Ravel, we look forward to this evening’s programme with high expectation, knowing we’re in for a very good time!

Natascha Chircop graduated in pianoforte and flute from the Conservatorio G. Verdi, Milano, and in chamber music from the Accademia di Firenze. She also holds diplomas from London’s Trinity College of Music and the Royal Schools of Music and a B.Ed (Hons) degree from the University of Malta. Apart from recitals in France, England, Spain, Germany, Syria, Italy, New York and Malta, Natascha has also performed solo with the Malta Philharmonic Orchestra on numerous occasions, interpreting the concertos of Arnold, Ravel, Poulenc, Franck, Jiřásek, Vella, and Pace. Earlier this year she premiered Joseph Vella’s Symphonic Variations on a Theme by Chopin op. 131, with the Malta Philharmonic Orchestra at the Manoel Theatre.  She has also been invited to perform with the Guido Cantelli Orchestra, Milano, and the National Orchestra of Porto.  Recordings are numerous and they include works by, amongst others, Vella and Chabrier.

Marco Rivoltini graduated in pianoforte from the Conservatorio Arrigo Boito, Parma, and, subsequently, in chamber music from the Accademia di Firenze. He is also a music graduate from the famous Bologna University and has gained valuable experience with the Trio di Trieste at the International School of Chamber Music.  As a soloist and in the formation of pianoforte duet he has won several Italian and international competitions.  He has given many recitals in his native Italy, notably, in Milano, Arese, Rome, Lucca and Novara. Further performances have seen him tour France, New York, Syria and England.  He has also performed extensively in Malta, either in pianoforte duet or in various chamber formations.  On several of these occasions, Marco has performed with the Malta National Orchestra (subsequently, the Malta Philharmonic Orchestra.) He has numerous recordings to his credit, amongst which one finds works by Vella and Chabrier.

Duo Chircop Rivoltini started working together in 1995, when they followed a two-year course in chamber music at the Florence Academy.  They have performed extensively, both in the major venues in Malta, to include the Manoel Theatre and the Mediterranean Conference Centre, as well as during the Victoria International Arts Festival. They gave the world premiere of Joseph Vella’s Concerto for Two Pianos at the Marseille Conservatoire, with a repeat performance at the famous Lincoln Centre, New York. They have lately also performed at the Abbazia di Viboldone, Milan. Performances with the Malta Philharmonic Orchestra include Poulenc’s Concerto for Two Pianos, Saint-Saëns Carnival of Animals, Arnold’s Concerto for Piano Duet and Strings, and Concerto for Three Hands, Bruch’s, Mendelssohn’s, and McDonald’s Concerto for Two Pianos and Tansman’s Suite for Two Pianos – the last five were given their premiere performance in Malta by Natascha and Marco.  Other performances have taken them all over Europe, the Middle East and the U.S.A. They have recorded for the label Rugginenti and original contemporary Maltese works by Joseph Vella. 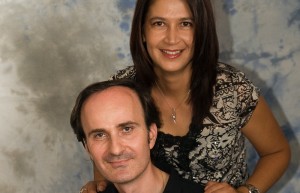