On Thursday 16 June, Victoria International Arts Festival presented the Alke String Quartet from the Southbank Sinfonia, London. They presented a concert of works by Beethoven, Janáček , and Webern. This quartet is made up of very young musicians, and the maturity they displayed in their interpretation of such known works attested to their already remarkable performing experience.

Starting with Beethoven’s four-movement Quartet no. 11 in F Minor op. 95 (‘Serioso’), the Quartet settled down immediately, with sonorous tones and impeccable phrasing characterising this well-known piece. The first movement exemplified an unmistakable characteristic of Beethoven’s middle period – a continuous sonata form without repetitions. However, the actual structure of the movement looks forward to the unified forms of his late period in which the strict divisions of the sonata form are broken down to create an artistic whole in which an idea continuously evolves from beginning to end. Another unmistakable foreshadowing was the expanded use of foreign tonal centres. The keys of A major and D major, not in the slightest way theoretically related to the tonic of F minor, both made brief appearances.

The unusual use of the key of D major carried over and became the tonic of the middle movement. However, the original key of F minor cast an ominous shadow over the movement in the recurrent flattening of the sixth scale degree (B natural to B flat). Like so many examples from Beethoven’s late period output, this movement nearly escaped any impression of a traditional form, yet at the same time there was no moment in which the flow of ideas seemed haphazard. This was largely due to the cohesiveness and unity in thought and action exercised by the members of Alke; indeed, throughout they manifested a knowledge and adherence to form and content, and even in the more ‘romantic’ moments of this movement, the interpretation never lost its basic rational approach.

The third movement, beginning without break from the second movement, could best be described as a serious Scherzo – an oxymoron to say the least and a perfect example of Beethoven’s ‘joking seriousness.’ The Trio was repeated twice like in the Scherzo of the later monumental Symphony no. 7.  With the Scherzo in the key of F minor, the Trio made use again of the foreign tonality of D major. The last movement began unusually with a Larghetto introduction. These seven measures were remarkably unique, looking forward not only to the late quartets fourteen years later, but, according to Joseph de Marliave, also foreshadowed Schumann’s Symphony in C and even Wagner’s revolutionary Tristan.  The finale proper, in an Allegretto tempo, began with a straightforward melody but was not lacking in emotional content. The plasticity of the theme made it perfect for development. After the final reprise of the theme, a brilliant Allegro molto in F major concluded the piece.  This coda held the same relationship to this finale as the triumphal F major march of the Egmont overture (also written in 1810) to what preceded it. With it, the Quartet Serioso came to a jubilant, heroic end.  There was some extraordinary playing by the first violin and the viola, and the cello’s interjections were robust, tender, and warm.

Next on the programme was Janáček’s extremely difficult Quartet no. 1 (‘Kreutzer Sonata’).  This work is subtitled ‘The Kreutzer Sonata,’ after the story by Leo Tolstoy upon which it is based; the title of Tolstoy’s story, of course, is taken from Beethoven’s ninth violin sonata.  This was not the first work Janáček wrote based on this Tolstoy story; a Piano Trio from 1908 is now lost.  According to Josef Suk, who led the premiere of the Quartet on October 17, 1924, Janáček wished with this work to protest the tyranny of men over women; in the story, a female heroine seeks refuge from an unhappy marriage in the arms of an amoral seducer, and dies tragically after doing so.

Although Janáček did not attempt a line-by-line re-creation of Tolstoy’s story, the music clearly suggests certain programmatic correspondences.  The first movement, Adagio – con moto, seemed to depict the heroine’s unhappy situation, with a yearning, almost questing theme bracketed by agitated figures; a pastoral theme that followed broke up and then suddenly cut off, yielding to an even more passionate version of the yearning theme. The second movement is Con moto, and the way the Alke played it, took the approximate form of a Czech polka, introducing a theme which seemed to belong to the seducer; this theme had to contend with both agitated ponticello and quiet, private music, but kept popping back up, as suave as ever.  The third movement was one replete with different moods.  In fact, the tempo marking is Con moto – Vivo – Andante, and began with a canonic duet between first violin and cello.  The music they played recalled the gorgeous second subject of the first movement of Beethoven’s Kreutzer Sonata.  Even this music, however, was broken up by spasms of dissonance in the other two instruments, suggesting doubts and fears.  These were realised in a violent middle section in which the violin and cello trade hysterical phrases, before collapsing into a somewhat uneasy intimacy again. All this was superbly managed and despite the frenzied mood that captured this movement, the quartet made sure that things never got out of control, and the formal properties of the work were never threatened far less jeopardised.

The fourth movement started once again Con moto, but then developed into an Adagio and finished Più mosso. It began slowly and sadly, and after the music speeded up, it seemed all too eager, and wound itself up too tightly. The middle section of the third movement reappeared, transformed, and the music reached a wrenching climax, followed by a pathetic coda. Janáček’s passion for the rights of women was as evident here as his typically sensitive use of programmatic material and his impeccable craftsmanship, making the ‘Kreutzer Sonata’ a memorable quartet superbly interpreted by Alke.

The final item on the programme was Webern’s Langsamer Satz, literally meaning ‘slow movement’. Unlike the more mature Webern, this work (which was written when the composer was just 21 years of age and deeply in love with Wilhelmine Mörtl who later became his wife), is tonal, albeit chromatic, and is firmly ensconsed in a tradition stretching from Liszt through Wagner to Hugo Wolf, Richard Strauss, and Mahler.  It has a root key, C minor, and a traditional sonata-form structure. Alke approached the work with a quiet yet deep sensitivity that, however, never encroached on the sentimental. Such a gorgeous rendering it was, with the second violin emerging to the fore when the occasion demanded it.

The end of the concert was greeted by a very warm applause from the audience that practically filled St Francis Church in Victoria.  This concert was the first of three string quartet recitals that VIAF is offering in this nineteenth edition of its Festival.  It certainly augurs well for the next two: the standard that Alke established in the genre of string quartet playing ranks among the finest we have had! 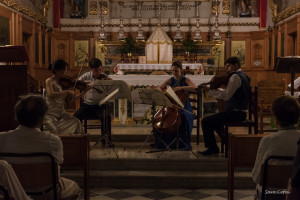 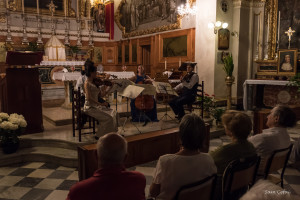 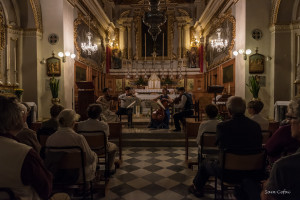 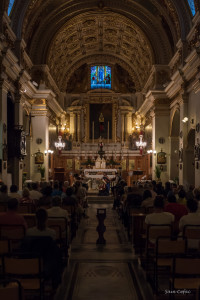 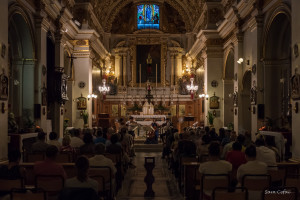