On Monday 4 July, the Victoria International Arts Festival welcomed a most accomplished trio from Upper Austria, namely, the Trio 2016Plus, made up of Viktoria Kurina (Violin), Hrvoje Hresc (Violoncello), and Anastasija Govorova (Pianoforte). These three very young musicians are prize winners at the prestigious Anton Bruckner Music University in Linz, and their extremely high standard attests to the rigour and discipline with which they engage in their studies.

First on the programme was Beethoven’s Trio in D Major op. 70 no. 1. This Piano Trio has three movements, an old-fashioned scheme that Beethoven endows with new concision. Because of its strangely-scored and undeniably eerie-sounding slow movement it was dubbed the Ghost Trio.  The name has stuck with the work ever since.  The ghostly music may have had its roots in sketches for a Macbeth opera that Beethoven was contemplating at the time. That said, however, one must not listen for ghosts in the other two movements – they positively sparkled with life, from the wonderfully boisterous metric obfuscation that opened the Allegro vivace e con brio first movement (the movement is in 3/4 time, but in the first few measures the eighth notes, after a single group of three, are grouped in fours), through the swinging scales that underscored that same movement’s second theme, and finally to the humorous, scampering Presto finale and its occasional comic fermatas.  And yes, one should chuckle as the pianist, violinist, and cellist tried desperately not to step on each other’s toes when, near the close of both the exposition and the recapitulation of the finale, the piano taking off with a rapid-fire little right-hand cadenza that moved to a completely ridiculous key and the strings had no choice but to help the piano find its way back by spinning out a chromatically ascending sequence in octaves that did manage to arrive at the proper key!

More serious structural thinking was on display as well: consider the elaborate modulation from tonic to dominant in the first movement’s exposition, forecast by a quick shading, as in the Symphony No. 3, within moments of the beginning of the piece.  The harmonic scheme of the work as a whole is elaborate, with references and interconnections between movements.  As much as any other work Beethoven ever wrote, the Ghost Trio invites and challenges listeners to appreciate it at a variety of levels.  This was one work that was performed with a high level of attention to detail of phrasing and dynamic contrasts.

Next came the Trio in One Movement by Till Alexander Körber, a contemporary Austrian composer.  As a very religious man, Till wrote the Trio in One Movement with a distinct narrative to it about good and evil.  The piece started with a simple melody, evoking the benevolence of God.  As the music progressed, the texture became more turbulent and volatile, and the initial peace was shattered by clashing harmonies, rugged rhythms, and irregular phrasing while the dynamic intensity increased considerably.  After this strong and unsettling section, where graphic images of evil were conjured up, the storm abated and the light ethereal sounds of the start of the movement were heard again, denoting the triumph of good over evil, with tranquillity and peace reigning.  Throughout, the Trio displayed impeccable balance, with none of the instruments overpowering the other. There was maturity and sensitivity here that far surpassed the very young age of the performers.

The third and final piece on the programme was Brahms’ Trio no. 1 in B Major op. 8. Like Brahms’ other Piano Trios, and unlike those of Mozart, the work is in four movements, with a second-movement Scherzo added to the usual three movements.  This gives the work a near-symphonic scope; a performance can run to nearly 40 minutes.  The work began pensively.  After a brief piano introduction came a marvellous cello solo theme, so typical of Brahms’ warm and lush textures, which migrated to the entire ensemble.  Rather than developing in the manner of Mozart’s Trios, the work then unfolded more like the first movement of a symphony, rich in themes and ideas. This long first movement, in fact, was that which Brahms most extensively revised in the later version of the work.  The Scherzo featured a whispered, skipping minor theme which quickly burst into a major key and became positively exuberant.  A second, bucolic theme, still in the major mode, built to grand proportions before the first theme returned, developing in startling directions, and ending the movement dramatically but quietly. Particularly in this second movement, the three musicians’ approach to the work was poised, elegant, and assured.

The work became mysterious in the Adagio.  A passage of soft, stepping piano chords beneath singing phrases in the violin led to an extended and very warm violoncello passage.  In spite of its overall darkness, the movement was serene, almost meditative.  It ended, as it began, with stepping piano chords.  The final movement came across as the most expansive of all, as Brahms once again makes use of the piano’s power to create a symphonic sweep.  A once-repeated passage of syncopation was strangely distracting, but the movement built to a satisfying finish.  As a Piano Trio, the work is notably enormous in scope and sound.  Reflecting in its two versions both early and mature Brahms, it is a virtual blueprint of the composer’s stylistic development.

This concert confirmed the abiding fact that young musicians playing chamber music is not only entertaining for an audience, but also extremely beneficial to the musicians themselves.  Trio 2016Plus has a whole bright and promising future ahead of it!  Well done! 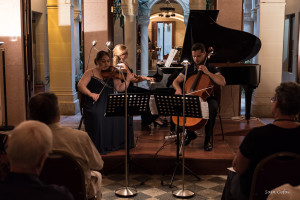 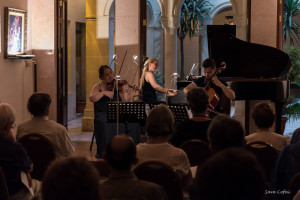 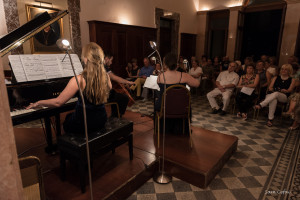