Organist and harpsichordist Benedict Lewis-Smith saved the day yesterday evening! A concert featuring English, Italian, Spanish and Flemish Baroque music was the second of five concerts of Baroque works. Richard Vendome, a great benefactor of St George’s Basilica, was scheduled to come over and give a performance of these Baroque works. Richard is no newcomer to Gozo. When he first visited Gozo some fifteen years ago, he was struck by the wonderful cultural activity emanating from the environs of St George’s Basilica. Such was his enthusiasm that he, together with Gordon Curtis and the late David Bolton, actually built a disused organ from scratch, one which used to live in a Methodist Church in England. Richard donated the organ to the Basilica and he was also pivotal in helping the organizers of the Victoria International Arts Festival to acquire the fantastic harpsichord which is a model of the famous Antunez of 1785.

Due to an unfortunate accident just days before the concert, Richard had to opt out due to his injury. He was very generous with us, as always, and contacted Benedict to stand in for him and Benedict literally hopped on a plane and flew out yesterday morning to perform in the evening.

The concert featured works for organ and harpsichord, both of which are housed in the Aula Mgr G. Farrugia, making it the only concert hall on the islands to accommodate a concert grand piano, an organ and a harpsichord. Benedict’s mastery on the organ was in evidence immediately, with a lovely Purcell Voluntary in D Minor. The sensuous, mellow tones of the organ were exploited to the full, as Benedict moved seamlessly from English, to Italian, Spanish and Flemish Baroque masters in what are largely short pieces but ones that are paradigmatic of the respective styles.

Bach’s Prelude and Fugue in Bb Major BWV866 was performed on the harpsichord, whose clear brilliance provided a marked contrast to the organ’s rounded tones. The recital finished with one of Haydn’s typical pieces entitled Eight Pieces for Musical clocks. A resounding round of applause was more than merited and we hope to see more of Benedict in future editions of the Festival!

The organizers also wish Richard a speedy recovery and fewer encounters with such hazards!! 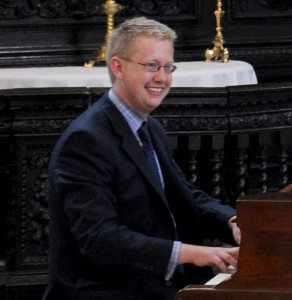