Yesterday evening’s performance added another feather to the Festival‘s cap. Duo Mira from Norway, comprising of Emil Huckle (violin) and Olga Jørgensen (pianoforte) performed two of the most demanding Sonatas in the canon, namely, Beethoven’s Sonata in A Major op. 47 no. 9, better known as the Kreutzer and Ravel’s Sonata in G Major no. 2.

Starting with the Beethoven, the rapport between the Duo was immediately established. Despite their very young age (they are barely 20 years old) their performance and attitude betrayed a maturity well beyond their young years. The piano part of any Sonata is always as demanding as that of the instrument it is accompanying and the Kreutzer is no exception.  This performance was nothing short of brilliant.

The Ravel is a very difficult work. Couched in impressionistic language, it is a very fluid piece with no apparent boundaries of form attached to it. The second movement is the famous Blues movement, which attests to the composer’s deep interest in Jazz forms and genres. As in the Beethoven work, the violinist played from memory and this is no easy task given that there is very little in the way of melodic line to latch on to mnemonically. Once again, this was a very mature and intellectual performance. Olga proved to be a very solid and confident accompanist and one understands why she has been entrusted with performing Rachmaninov’s formidable Piano Concerto no. 2 this Fall.

A deafening round of applause greeted the performers after each Sonata.  The visit of the Duo was made possible through the Norway Music Competition for Youth. The first-prize winners are awarded a concert in the Victoria International Arts Festival a d this is the ninth consecutive year that Norway has sent brilliant musicians to participate in our Festival. 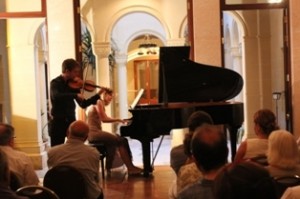 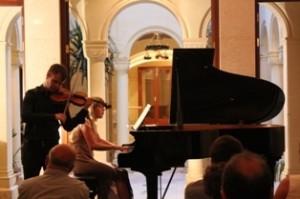