Österreich Ensemble fur Neue Musik gave two consecutive concerts on Wednesday 10th and Thursday 11th July to a highly appreciative audience. Despite a few of the pieces being almost avant garde one could not but be so impressed with this ensemble’s high professionalism, musical maturity and perfection cohesion.

The first concert consisted of Debussy’s very lovely Sonata for violoncello and pianoforte and the French composer’s Premiere Rhapsody for Clarinet and Pianoforte. This was followed by Xenakis’s Charisma for Clarinet and Violoncello and, finally, the very difficult, contemporary work by Lachenmann, namely, Allegro sostenuto for Clarinet, Violoncello and Pianoforte. The Debussy works flowed like an Impressionist painting, with subdued pastel shades and dreamy quality fully exploited by the quiet tones of the instruments. Xenakis’s work brought to the fore a robustness to the texture that had not been evident in the Debussy pieces while the Lachenmann work, which is of more than 30mins duration, gave an entirely new dimension to inherent possibilities of dynamics and tonality. Although one cannot say that this work is dependent upon melodic development, it captivated the audience with the performer’s remarkable execution, aplomb and vigour.

Thursday’s concert was an entirely different kettle of fish, as it were. The programme consisted of Joseph Vella’s 3 Songs for Phaedra op. 56 for Clarinet solo, Hindemith’s Sonata in E Major for Violoncello and Pianoforte, Alban Berg’s 4 Pieces for Clarinet and Pianoforte and Brahms’s Trio in A Minor op. 114.

Vella’s work depicts the myth of Phaedra and the clarinet (in Bb and in A) fully brought out the wide range of strained emotions of the piece. Phaedra undergoes moods crossing from ones of jubilant elation to deep despair that leads to death and the clarinet, which acted as the speaking voice of Phaedra so much so that it came across as a kind of a dramatic monologue in a Greek tragedy, more than did justice to this lovely work. Andreas Schablas possesses a very sensuous and almost tragic tone in the lower register, with a dynamic range that encompasses the fortissimo to a superbly muted pianissimo.

Peter Sigl on the violoncello tackled the Hindemith Sonata with supreme mastery and control. The neo-classical style of Hindemith is more than evident in the structure of the work, employing a unique system that is tonal but non-diatonic. Like most tonal music, it is centered on a tonic and modulates from one tonal center to another, but it uses all 12 notes freely rather than relying on a scale picked as a subset of these notes. This is most evident at the start, with the Pastorale, which has a liquid flow to it, unhindered by key or key-relationships. The second movement, an Allegro moderato, brings complex contrapuntal layers to bear on the overall texture of the movement. Here, it is evident that one of Hindemith’s key features of his system is that he ranks all musical intervals of the 12-tone equally tempered scale from the most consonant to the most dissonant. The performance was of an extremely high quality, with the pianist Nora Skuta emerging as a force in herself, powerful, balanced and a wonderful accompanist.

As with most of Berg’s early works, in the 4 Pieces for Clarinet and Pianoforte there is a preponderance of quartal and whole-tone harmonies; like the String Quartet, op. 3 (1910), the Four Pieces undergo constant changes in tempi, dynamics, and articulation according to Berg’s intricate instructions (which sometimes change from beat to beat). The first and last of the Four Pieces are the longest, flanking a slow second piece and a scherzo. Here, again, the two performers rose to the occasion demanded of the work and carried them off with panache.

The final work was Brahms’s wonderful Trio op. 114, a work that brought the three performers together. A lush, rich and sensuous work, typical of Brahms, the Trio oozed beauty from every note. In the first movement, Allegro, a fairly straightforward sonata form grows out of a simple rising arpeggio and descending scale that grow into a complex contrapuntal web that is sustained throughout. A particularly sensitive use of colour, which is typically Brahmsian in its richness and sensuousness, and registral combinations between the instruments characterizes the second-movement Adagio; the entire movement is constructed of subtle rearrangements of two basic ideas. The third movement is marked Andantino grazioso. The main section of this typical dance form is a lovely and nostalgic Viennese waltz, while the trio section is an Austrian Ländler, the forerunner of the waltz, replete with yodelling clarinet. This short and exciting Rondo finale, Allegro, is in Brahms’ typical gypsy idiom, with its mixture of three-against-four rhythms and colourful minor-mode harmonies. It is the only movement of the Clarinet Trio that could be considered virtuosic, and it ends the work decisively.

Both concerts were greeted with a strong, spontaneous rounds of applause! This was music-making of a very refined order and one hope to hear more of this remarkable Trio from Salzburg! 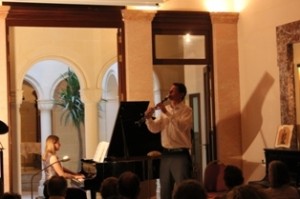 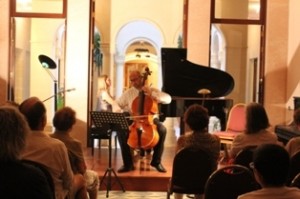