It keeps escalating … the standard I mean, not the heat (although that seems to be taking the hint!)

Back at St George’s Basilica after a great performance by Andrea and Djordje Gajic yesterday at St Francis Church.

The Martinů are back, as I advised a few hours ago, and they’re back with a bang not with a whimper (to borrow a phrase from T.S. Eliot). Always supremely elegant, refined, accomplished, it is a master class in musicianship. A big audience once again turned up to enjoy a performance that reached more peaks as it progressed!

Starting with arguably the most structurally perfect Haydn Quartet, namely, the one in G Major, op. 77 no. 1 it took no time at all for the Quartet to settle down and plunge into a piece that has all the hallmarks of eighteenth-century rationality, control and formal cohesion. Without in any way detracting from Classical restraint, there was an adequate dose of emotional power trembling beneath a shimmering surface, and nowhere was this more evident than in the slow movement. There is something remarkably aristocratic about a Haydn slow movement and it wasn’t lacking today at all!

Smetana pulsates with passion, pathos and deep longing. Like his Slav contemporaries, most notably Janacek and Martinů, the Romantic element in Smetana is always attached to a profound Nationalist tendency which makes him rightly known as ‘the father of Czech music’. His second Quartet, although not as well known as his first, bristles with a latent fire that on more than one occasion bursts through an uneasy surface to make its flames burn with meaning and poignancy. This was one massive work that flowed seamlessly from one movement to another, with a rapport between the musicians that was almost tangible yet framed in an intellectual understanding of the work.

One of Beethoven’s last Quartets of his middle period rounded off the eclectic programme this evening. Dubbed ‘Quartetto Serioso’ by the composer himself, more than a testament to the brooding foreboding that characterizes the master’s later works, this is an oxymoron, attesting to the composer’s joking seriousness, one that audiences do not readily associate him with. A monumental work in its own right, the Martinů effortlessly rose up to the occasion and delivered a performance marked by panache, virtuosity and the classic Beethoven intellectualism that is so difficult to define yet so obviously lacking when it is absent!

As an encore, after resounding rounds of applause, the Quartet graciously played a very early work by Schubert, composed when the master of song was not much older than a child!

Let’s have more of the same! Beauty will save the world (to quote another great literary figure, this time Dostoevsky!!) 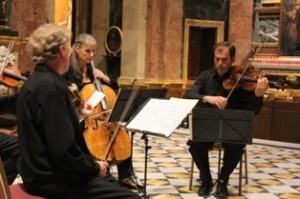 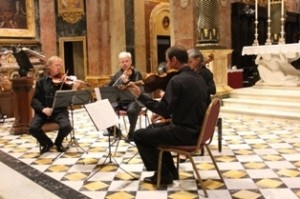